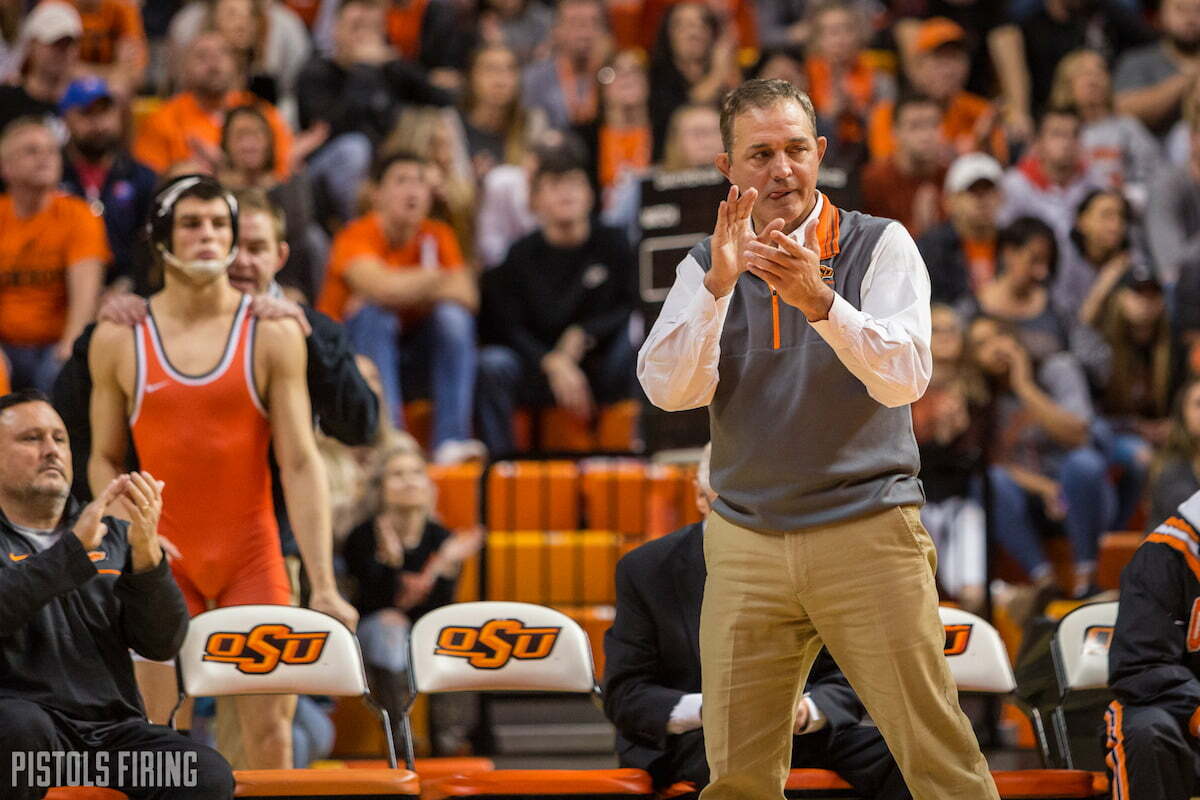 Cormier is one big link in a very long chain of former Cowboy wrestlers that have made the transition from wrestling to MMA.

Two true pioneers of MMA and legends in the sport are UFC Hall of Famers Don Frye and Randy Couture. Frye and Couture were teammates at OSU in the late 1980s and both entered into the UFC in the very early years of the company.

When Frye came in the UFC was a bit of a “blood sport” with very different rules than you currently see. It was a tournament with no weight classes, fights weren’t broken down into rounds, etc… Frye was a winner of the UFC 8 tournament and also won the Ultimate Ultimate 96 tournament in a way making him the “UFC Champion” in both those years as they didn’t have the belt system they currently do. I encourage you to google some of his highlight video’s. They’re insane. I would’ve posted here, but I couldn’t find a good one that didn’t have cursing in it.

Randy Couture is both a UFC Hall of Famer and a OSU College of Arts and Sciences Hall of Famer. Couture had an incredible UFC career. He held UFC titles six separate times, was the first fighter to hold a title in two separate weight classes and was the oldest UFC champ ever holding the HWT title at 45 years old.

Most of “Team Takedown” had OSU ties. Team Takedown had some issues and is no longer around and some of the OSU guys that were part of it are no longer in MMA, but Shane Roller, Johny Hendricks, Jamal Parks, and Jake/Jared Rosholt were all a part of that group. Hendricks, Roller and the Rosholt’s all made it to the UFC and as many know Johny eventually had a reign as UFC welterweight champ. Roller, Jake Rosholt and Jamal Parks are no longer fighting and Johny isn’t at the peak of his career like he was at a few years ago. But there’s no doubt he had a great run and just making it to the UFC is no easy task, so what all these guys have done is impressive.

Mark Munoz, Muhammed Lawal, Steve Mocco and Daniel Cormier all carved out very successful MMA careers. Their paths were sort of similar in that they all either wrestled on the international stage, Mocco and Cormier both Olympians and Lawal a world team member, or coached, Munoz being a coach at OSU and UC Davis prior to his MMA transition. Munoz and Cormier both made it to the UFC with Cormier having the most success as the light heavyweight champ only taking one “loss” in his career.

Overall OSU’s numbers in MMA are pretty incredible. Eight former wrestlers have made it to the UFC, three have won UFC titles, two have won Strikeforce championships, two have won the early UFC tournaments and former Cowboys are continuing to enter the sport as recent grads like Kyle Crutchmer are now training towards MMA careers. Crutchmer even called out an OU fan on twitter to let him know he would fight any of their football players.

A championship is a championship. And Go get your biggest and baddest football player and I'll whip his ass!! #straightfact #notirrelevant https://t.co/SnJbEI9un4

One interesting thing is Iowa, Penn State, and many of the other traditional powers in wrestling don’t have these similar numbers. PSU has had a few guys, Ed Ruth, Phil Davis, and others, but the numbers aren’t even really comparable to what OSU has done.

The only wrestling program that is comparable to OSU in this regard is Arizona State. They’ve produced 11 guys that have made it to the UFC, more than OSU, but they haven’t had the top-level success that OSU has with only one UFC title holder Cain Velasquez to OSU’s three with Couture, Hendricks, and Cormier.