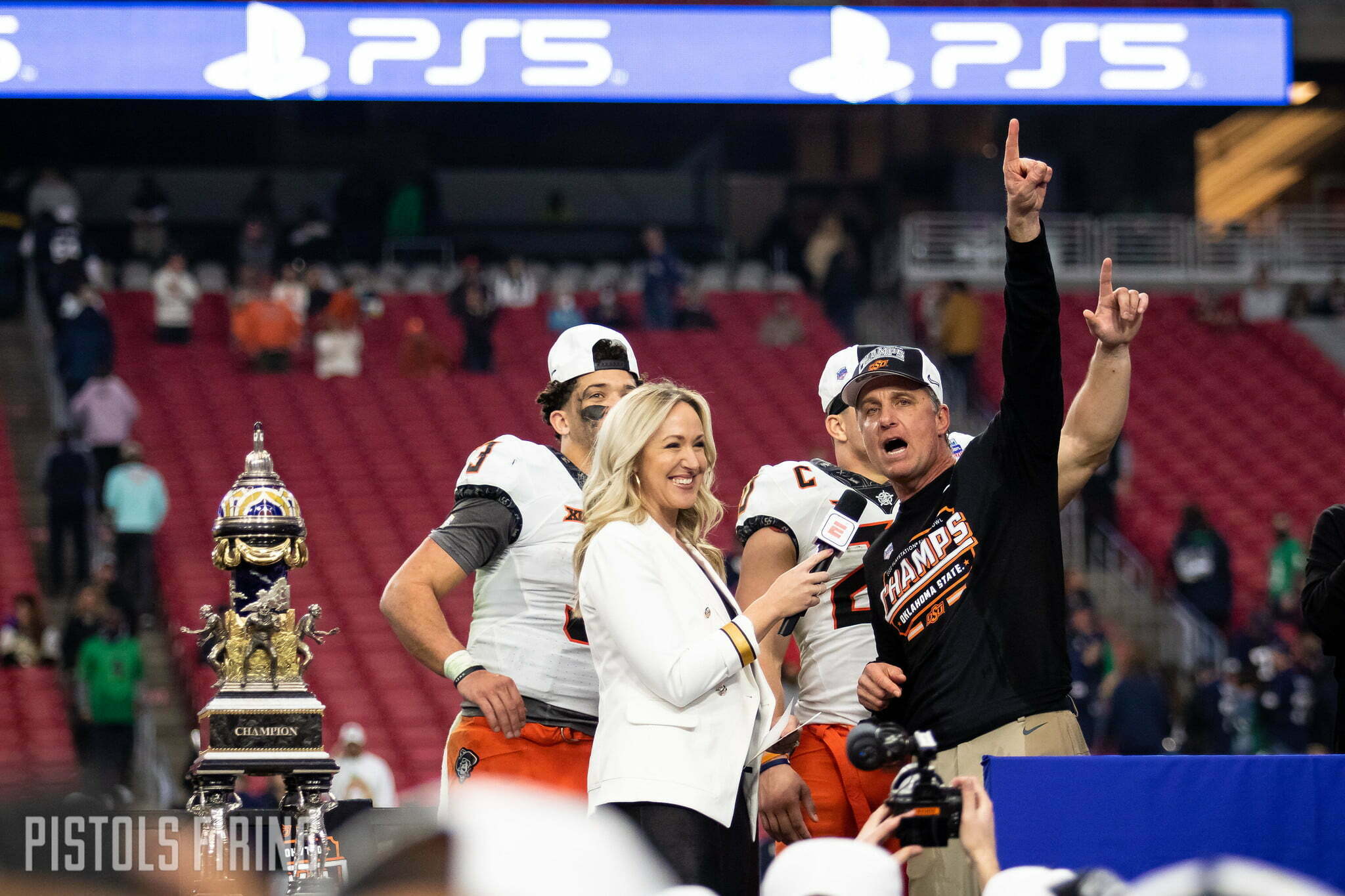 The Cowboys’ class of 10 ranks ninth in the Big 12 (ahead of only Kansas) and sixth in the conference in per player average. It isn’t breaking any news that Mike Gundy’s recruiting style doesn’t conform to rankings and stars ratings, and if anyone should get a pass on this sort of stuff, Gundy is the guy. His ability to turn less (in the eyes of star-makers) into more is well documented, but in NIL-era recruiting, that skill could be even more valuable.

In a lot of alleged cases since NIL was implemented, highly sought after recruits come with a price. It’s the type of stuff that will make Nick Saban and Jimbo Fisher throw stones over. An Oklahoma State doesn’t have the resources that Fisher does at Texas A&M or Saban does at Alabama (or of a Texas program that failed to make a bowl game in 2021).

Gundy said one could run into a situation in modern recruiting where, “for lack of a better term, you could get out-bid.” So, in order to avoid those battles, OSU will have to do what it has done so well under Gundy — evaluate well and develop.

“We don’t get many guys with the, what you would call, up-front four-stars, five-stars, whatever people would call them,” Gundy said at Big 12 Media Days last week. “We don’t have a lot of those guys. Most of the guys that have played during my time as a head coach that have been really successful are guys that are what would be two- and three-stars. We don’t have a lot of those guys, but [missing out on players because of NIL] could be an issue at certain schools and maybe at Oklahoma State.”

Malcolm Rodriguez gets a lot of the spotlight when people note OSU’s ability to turn a little-thought-of recruit into an NFL-caliber player, and rightly so. Rodriguez’s only other offer out of Wagoner High School was Wyoming. He then left Oklahoma State No. 4 on the program’s tackle list before the Detroit Lions took him in the most recent NFL Draft.

But if you look hard enough, there are other examples like that in OSU’s recent recruiting classes.

OSU’s 2016 class didn’t include a four-star prospect (outside of Tramonda Moore who never made it to campus). The class ranked 45th nationally. In the moment, it was underwhelming. With hindsight, it was fantastic. That class included a second round pick (Teven Jenkins), a fourth round pick (Justice Hill) and two sixth round picks (Rodarius Williams and Devin Harper). It also had Dillon Stoner, AJ Green and Amen Ogbongbemiga, who all played in NFL games this past season.

Will this 2023 class turn into that 2016 class? That’s hard to project. If someone could project it, it probably wouldn’t be ranked 53rd right now.

OSU’s evaluation skill has already proven stellar within this class. Recent commit Jelani McDonald was unranked when the pledge to the Pokes at the beginning of the month. His commitment forced evaluators to take a look at him, and McDonald went on a brisk, meteoric ride of the rankings to become a four-star prospect.

But, so long as the wins keep rolling in, Gundy has earned the benefit of the doubt when it comes to talent evaluation — especially considering what the recruiting landscape looks like until the NCAA puts some guardrails on NIL.

“I think the guys that Gundy recruits are kind of guys that flew under the radar for most of their high school careers,” said Brock Martin, the No. 1,000 player in the 2017 class. “You know, guys like Malcolm Rodriguez, he had one other offer besides Oklahoma State up until the last game of his senior year of football. That’s when he got picked up. So it’s a lot of guys like that. Three-star guys, maybe some low four-star guys that are coming in with a chip on their shoulder. There’s no entitlement. They want to be coached, they want to do all this stuff. I think that’s the reason why [OSU is always competitive].”