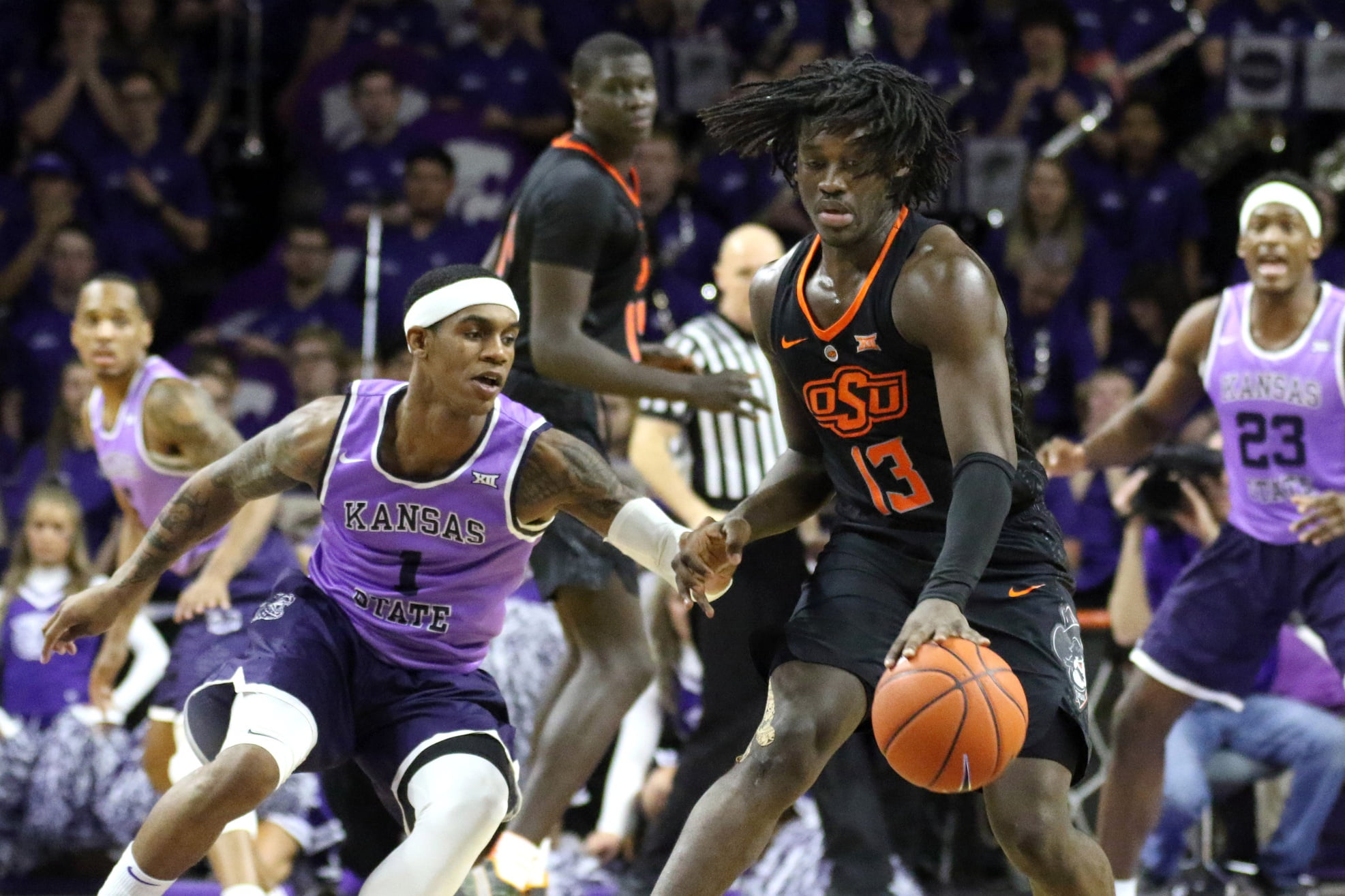 Tuesday, I wrote that the Cowboys’ performance against TCU showed Oklahoma State still had some fight left. That didn’t look the case Saturday.

The Pokes got dominated from the opening tip against Kansas State, losing 85-46 in Manhattan. The game was tied for all of 23 seconds, and from there, No. 23 Kansas State led the entire rest of the way. The Wildcats finished the game 62 percent from the field, 50 percent from 3 and a game closer to winning a Big 12 regular season crown.

Here are five thoughts from a game that wasn’t a pleasant viewing experience.

1. Not Ready Is an Understatement

It does not get much easier than that. Those two scores were part of K-State’s 15-0 run to start the game.

The Cowboys went into the break with a 42-18 deficit. At the half, the Pokes were 0-for-6 on layups and 0-for-9 from 3-pointers. They did that while allowing the Wildcats to shoot 64 percent from the field.

There are bad halves of basketball, there’s a gap the size of Yor Anei’s wingspan, then there is this.

J.K. Hadlock scored the game’s final points with 14 seconds remaining to bring the Cowboys within 39.

That’s not a great place to be, but it kept the Cowboys from tying a program-worst 41-point defeat. Hadlock was added to OSU’s roster this week. He’s another product of Mike Boynton’s open tryouts. He’s listed at 6-foot-1 from Glencoe High School and was a former junior college baseball player.

OSU’s program-record 41-point shellacking came against Baylor on Jan. 14, 2012, when the No. 4 Bears won 106-65. That day Quincy Miller, Perry Jones, Pierre Jackson and Quincy Acy combined for 73 points to outscore the Cowboys by themselves.

Although Hadlock’s bucket saved the Cowboys from tying that, it didn’t save the Cowboys from scoring a season-low point total. Forty-six is the fewest amount of points an OSU team has scored in a game since the Cowboys’ 61-46 loss to then-No. 7 Texas in 2011. Tristan Thompson was on that Texas team.

OSU captains Cameron McGriff, Lindy Waters and Thomas Dziagwa combined for 12 points off 4-for-19 shooting (21 percent) to go with five rebounds and a lone assist.

Saturday was particularly rough for Waters, as he fouled out in 19 minutes after scoring only two points and having no rebounds. He also received a technical foul early in the second half after exchanging pleasantries with K-State point guard Barry Brown.

A few things probably go into McGriff’s and Waters’ recent struggles. Teams have been able to clamp down on them more than normal knowing they are the Cowboys’ leading scorers on a roster that boasts as many scholarship players as days of the week. The two also averaged 34 minutes a game through the Pokes’ first 26. McGriff has played 906 minutes this season, and Waters has played 902. McGriff has already played more this season than he did all of last season. Last year, Waters played 948 minutes.

The freshmen tandem were far and away OSU’s most efficient offensive options. Anei finished with a team-high 12 points off 71-percent shooting. Likekele added 10 to that, and was 3-for-7 from the field.

In the summer, if you would’ve told me Anei and Likekele would’ve been the Cowboys best scoring options late into the Big 12 season, I would’ve thought OSU was going to have a great year or a terrible one. It’s safe to say that’s leaning toward the latter.

Unfortunately for the Cowboys, their next three games are against other teams fighting for a Big 12 title, as OSU heads to Lubbock on Wednesday to play Texas Tech before hosting Kansas in a week.

Within reach of a regular season title and a higher seed in the NCAA Tournament, those teams will be motivated to put a hurting on the Cowboys. After that, OSU travels to Baylor, a team that is also still in the hunt depending on how the Bears play the next week.

Then there will be the Big 12’s version of the XFL championship game, as OSU hosts West Virginia to conclude the regular season. That game could decide who finishes ninth and who finishes 10th in the conference.