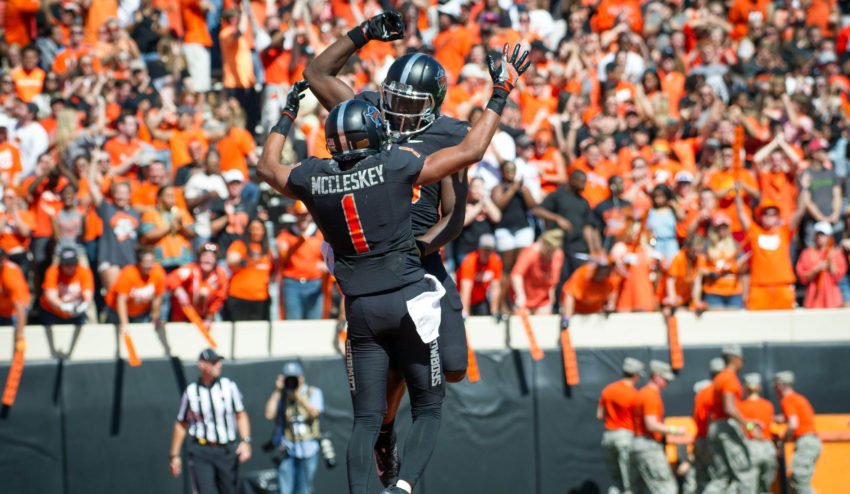 The Oklahoma State Cowboys head into 2017 with one of the best receiving groups in the nation. They have enough players at wideout to employ the same type of hockey-like line changes like Mike Gundy expects at offensive line throughout the year. Since 2012, the Cowboys have used a variant of the two-back spread, with their main personnel package featuring one back, one cowboy back and three wide receivers (11 personnel). The cowboy back is used all over the field, as the Cowboys frequently put him on the line, in the backfield and even split out at wide receiver.

But with the departure of seniors Zach Veatch and Blake Jarwin, the cowboy back position heads into the 2017 season with minimal experience. This, combined with how stacked the Cowboys are at wide receiver, should lead to the incorporation of more 10-personnel formations (one back, no cowboy backs, four wide receivers), i.e. the Cowboys using more wide receivers at once. Part of the reason why the the 2010 and 2011 Cowboys were so successful offensively, and why former OSU offensive coordinators Dana Holgorsen and Todd Monken were so heavily lauded, was that the Cowboys used a true version of the air raid offense.

The air raid system doesn’t just mean that a team throws the ball down the field. The system specifies the base concepts and philosophies, which includes using a small base of passing plays, doing everything with tempo, and predominately operating from 10 personnel. It would be unlikely for the Cowboys to change their scheme during the offseason, especially considering that their current one has been fairly successful. But that doesn’t mean that OSU can’t focus more on formations with more wide receiver-heavy personnel.

With players like James Washington and Marcell Ateman coming back, alongside receivers like Chris Lacy and Jalen McCleskey and newcomers Tyron Johnson and Tylan Wallace, the Cowboy receiving corps. is set to be one of the best in Cowboy history. The question is, will they be properly used?