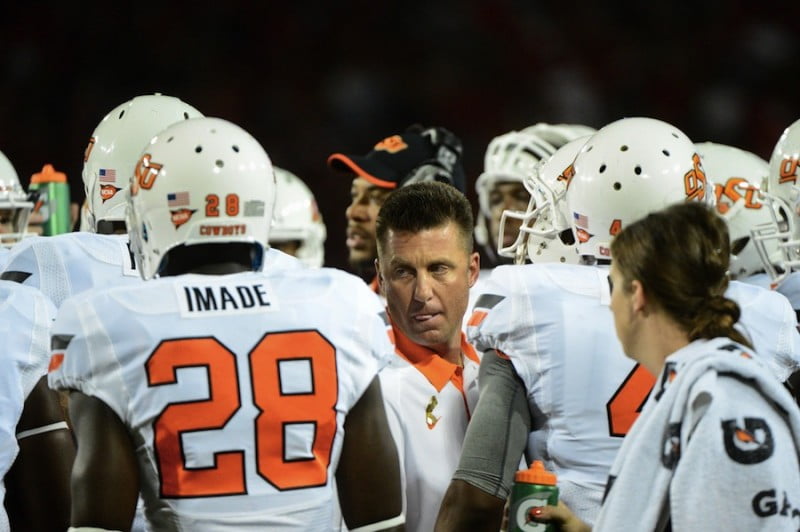 My comments in italics.

Gundy
“We’ve obviously talked about the Texas game and now we’re moving forward to Kansas. We got our players back from fall break last night and we practiced. Like always we have a day off today and then back at it tomorrow.”

Back at it tomorrow, of course. I want a t-shirt that says “back at it.”

“If you turn the ball over a couple times and miss a few tackles and the other team hits a few plays, then you can be in a difficult situation in the fourth quarter. You just have to look at the scores and you can see that happening every Saturday.”

Somebody watched that FSU-NC State game on Saturday night.

“We think as a one-loss team that we can win the league. A two-loss team may even win this league with what’s out there. I don’t know that anyone knows. West Virginia and Kansas State have set themselves up early, but it’s really early. There’s a lot of football out there and a lot of factors can play into that. You have to stay healthy and you have to take care of the football, and I think most coaches would agree with that. That provides for an exciting two months coming up.”

One of the most fun Big 12 seasons ever.

“It’s important to understand that third downs get you off the field, and sometimes in our league fourth downs have to get you off the field. If you watch games, the critical areas in college football are third downs, limiting big plays and taking care of the football. It’s not just one team, it’s just about everybody in the league. I think you’ll see that teams that play well on third down or fourth down, take care of the football, and try to eliminate the big plays are the ones that are winning.”

Does he know we’re better so far at 3rd downs than we were last year?

“He’s got a couple games of experience. He has some of the same characteristics. He’s competitive and his work ethic and leadership ability are very good.”

So. Many. White guy. Descriptions.

Bill Young
“[being defensive coordinator at Kansas] was a lot of hard work.”

I would imagine it was.

“We’ve been working on [forcing turnovers] every day. We worked on it last night. We’re just emphasizing it to no end. Eventually it will turn around. The ball is going to bounce the right way or we’ll get a tipped pass. I’ve always felt turnovers come in droves and hopefully we’ll have one of those five turnover games soon and try to catch up. We’re definitely behind and we have to do something to make up ground.”

The pendulum has swung too far in the opposite direction of last year. At some point there has to be a rebound. Especially based on these numbers.

Todd Monken
“Wes was out there throwing the other night in pads. He threw the ball really well, and that gave us some encouragement. We just have to get to the point where we are confident he can run. He ran a little bit the other night, so we’re hopeful to get him back this week so we can see if he can protect himself. I think that’s the biggest thing. Also, seeing who gives us the best chance to win.”

Translation: “dear God, get me an arm back out there asap.”

Obviously by Tuesday or Wednesday we’ll know [who’s starting]. Now whether everyone around the country will know, I don’t know, but we will.”

On what he sees on film from Kansas:
“[Kansas] plays hard. I think they’ve been really competitive on defense.”

Davidell Collins
“From the film we have been watching from the Kansas State game, they look pretty good. If there had been a couple plays that would have gone their way, it would have been a closer game than the final score showed. The quarterback is talented and they have a solid run game.”

Straight out of the Mike Gundy school of not saying opponents’ names.