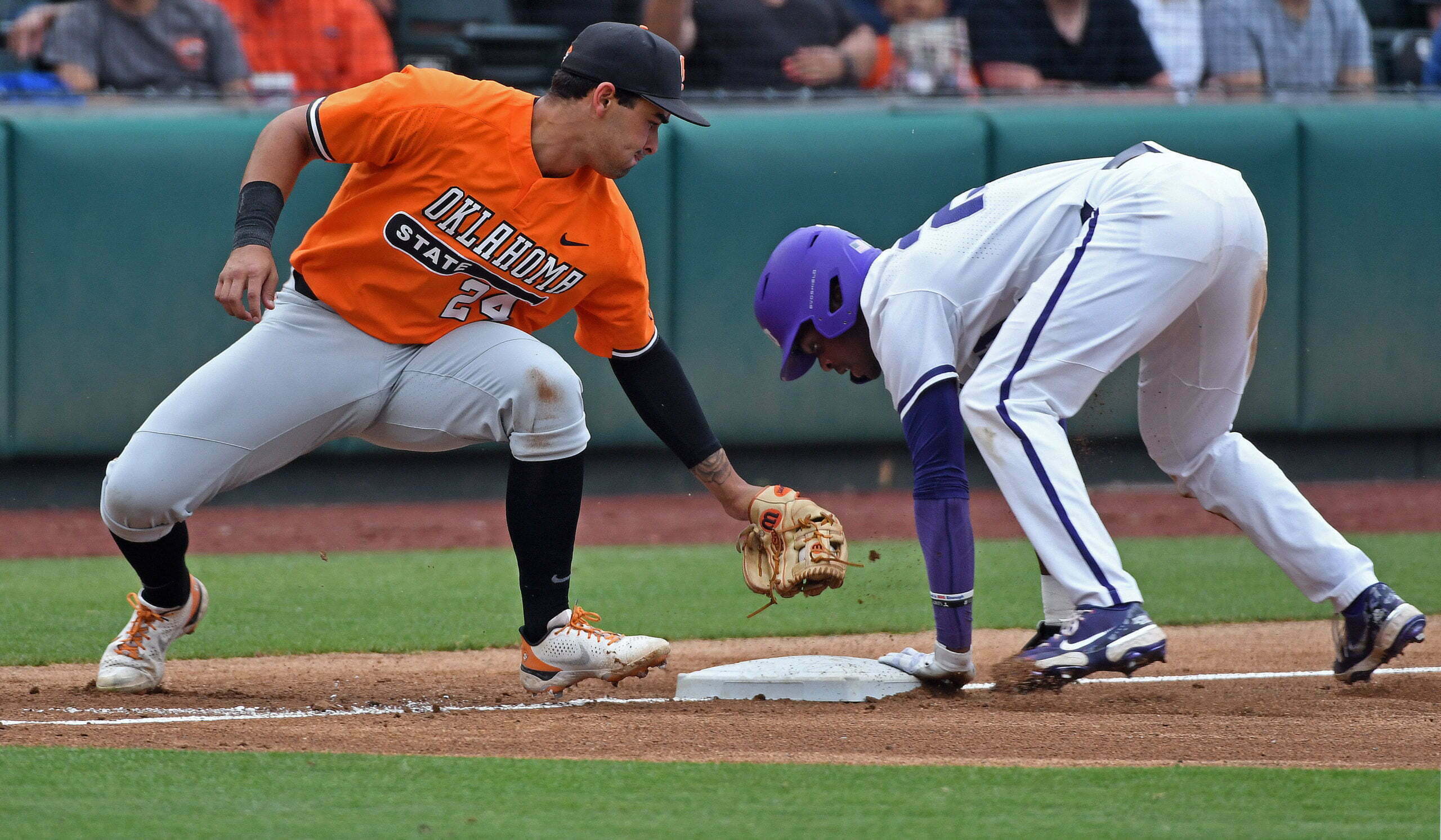 Fourth-seeded Oklahoma State fell to 2-seed TCU 10-7 in the Phillips 66 Big 12 Tournament Championship. Their bats were lively, but it was a tough day on the mound for the Cowboys.

Six pitchers saw action for OSU, and the group allowed 10 earned runs, striking out 10. The Pokes turned in a combined 4.09 ERA.

Trevor Martin got the start from the mound and found himself in trouble early and often.

In the first, Martin walked TCU’s Porter Brown who stole second and third, and Brayden Taylor stole second to put two Horned Frogs in scoring position with just one out. Fortunately, Martin was able to strike out consecutive batters after falling behind 3-0 in the count each time.

In the second, Martin found himself facing loaded bases with one out, but this time he was not able to pitch his way out of the pickle. A Brown single up the middle sent two Horned Frogs across the dish and ended Martin’s day.

Noah Sifrit, who has mostly played in the outfield this season, emerged from the bullpen and threw just two pitches to get the two outs needed to stop the bleeding thanks to this double play.

OSU looked ready to blow this thing open in the third, scoring five runs on just two hits, all unearned.

The Cowboys loaded the bases in unconventional fashion. Matt Golda reached on a fielding error, Christian Encarnacion-Strand was hit by a pitch and Jake Thompson was walked.

With two outs, Carson McCusker dinged one toward second base, but what should have been an easy out turned into two runs scoring on yet another fielding error.

Then Cade Cabiness hit his eighth home run of the year to pile on three more runs.

But TCU roared back in the bottom of the third when Phillip Sikes sent one over the wall to pull back within a run. Then Brayden Taylor hit a sac fly to knot things up at 5.

In the bottom of the fifth, Colton Bowman found himself in a mess in his first inning on the bump, after a walk and two singles loaded the bases with just one out. Enter Brown.

Brown has been the Frogs’ hottest hitter in OKC this week, and he didn’t disappoint. He hit a bases-clearing double to put TCU up 8-5 and relieve the Cowboys’ reliever of his duties and necessitate the third pitching change for the Pokes.

The Frogs’ lead-off man got on base in each of the first seven innings, and they’re one of the most dangerous teams in the nation when they hit the bag. TCU tied a Big 12 Tournament record with seven stolen bases, six of which happened in the first two innings.

Caeden Trenkle gave the Cowboys some life with a home run in the seventh, and the Pokes scored again in the eighth on a Matt Golda single RBI, but it was too little, too late.

The Cowboys await Monday’s selection show at 11 a.m. to see where they’re headed for the regional round of the NCAA Tournament. OSU was projected as a 2 seed prior to the Big 12 Tournament. The Cowboys’ strong performance at the event has likely solidified that.