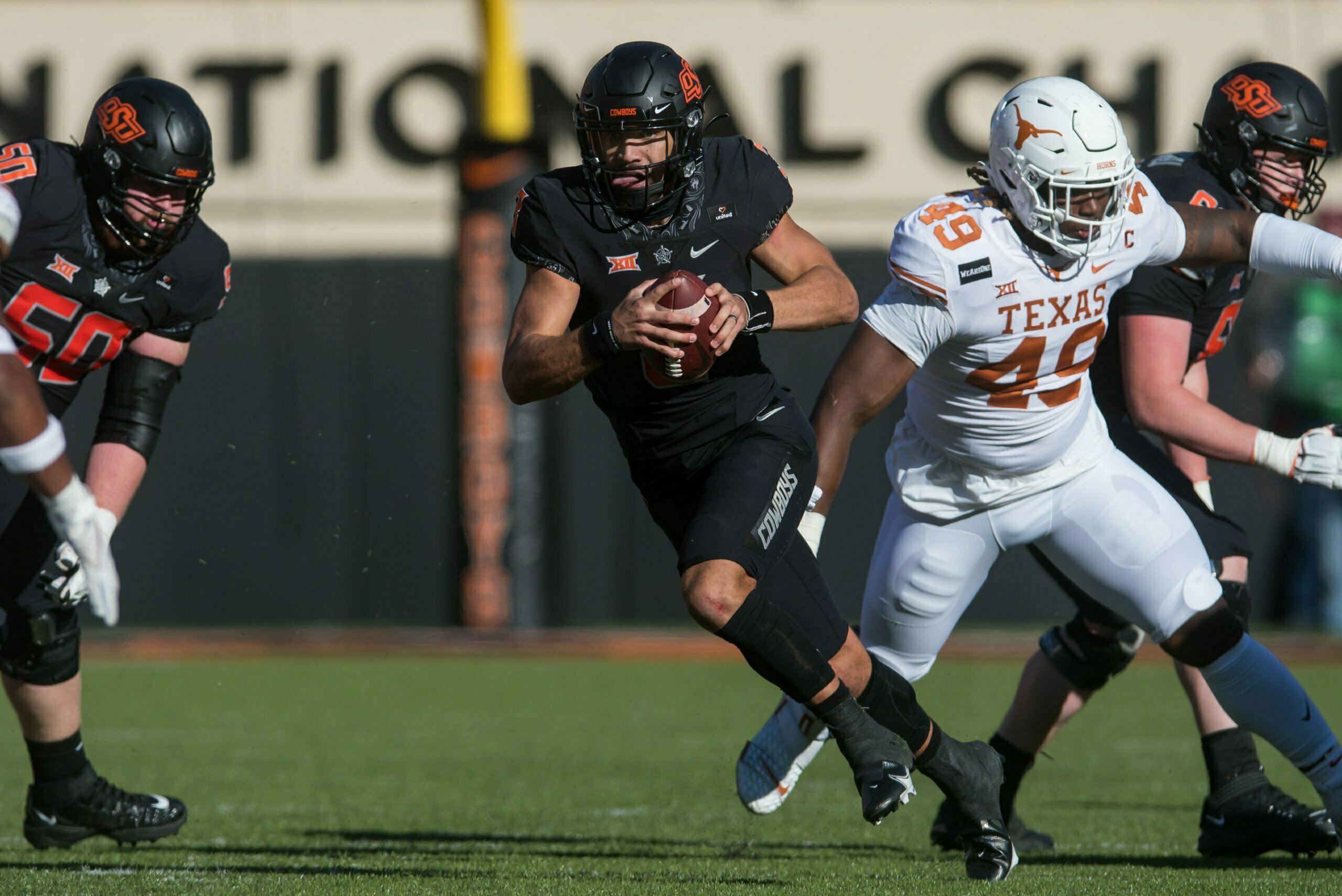 We already previewed the Cowboys’ nonconference schedule, now let’s move on to Big 12 play, where the Pokes will play their first two games at home.

The Cowboys kick off conference play with a visit from the Wildcats with a chance to make it three-straight Ws in the series, and a shot to win consecutive Big 12 openers for just the second time over the past decade. OSU is 3-6 in conference debuts since 2011.

Kansas State in 2020: The Wildcats took a step back in Chris Klieman’s second year thanks in big part to injury at the quarterback position. After an 8-5 finish and Liberty Bowl loss in 2019, K-State went 4-6 in 2020 and headed into 2021 riding a five-game skid.

Kansas State in 2021: Skylar Thompson will soon usurp Perry Ellis as the name synonymous with a long-toothed Big 12 players, and he’s back in 2021 to lead the Wildcats in a bounce-back effort.

The Cowboys host the Bears, who owned the state of Kansas last year, but little else.

Series History: OSU holds a 21-18 advantage over Baylor all-time, and a 13-7 edge in Stillwater. Last season, the Pokes thrashed the Bears 42-3, ending a two-game losing streak to Baylor.

Baylor in 2020: The Bears felt the effects of COVID as much as any team in the Big 12 last season, and that had no small effect on a disappointing 2-7 inaugural season under head coach Dave Aranda. Baylor’s only two wins came at home over an 0-9 Kansas team and the abovementioned Wildcats.

Baylor in 2021: The Bears are installing a new offense thanks to incoming OC Jeff Grimes but will be without established starter Charlie Brewer, who transferred to Utah in the offseason. The rebuild likely will continue for Aranda’s Bears, but things can’t go much worse than they did last year.

The Cowboys only have one road game (Week 3 at Boise) before Game 6 in mid-October. If things fall in their favor, that could allow for some significant momentum heading into their trip to Austin.

Series History: The Pokes have been on the wrong side of this rivalry historically, going just 9-26 all-time against the Horns. But things have gone their way as of late, with OSU being 6-4 against that other shade of orange over the previous decade.

OSU held the record for longest win streak ever in Austin (five) until its 36-30 road loss in 2019. Now we’ll see if Mike Gundy can reclaim his deed to Darrel K Royal — Texas Memorial Stadium.

Texas in 2020: The Longhorns weren’t quite back, posting a 7-3 record and going 5-3 in the Big 12. They did take advantage of an all-ugly performance by the Pokes in Stillwater, upsetting then-No. 6 Oklahoma State 41-34. But a second-straight Alamo Bowl win wasn’t enough for Tom Herman to keep his job.

Texas in 2021: Sam Ehlinger is definitely not back, so it appears that it will finally be Casey Thompson’s turn to prove he can lead an offense. He’ll have plenty of weapons like intriguing sophomore running back Bijan Robinson.

Enter Steve Sarkisian who completely rehabbed his coaching career by transforming Alabama’s offense over the past two years. In his first head coaching gig since he was fired from the USC job in 2015, he steps into what could be a golden opportunity at Texas.

But the same could have been said for Charlie Strong and Tom Herman. Eight years later and UT is still looking to get back to the level it was under ousted head man Mack Brown.