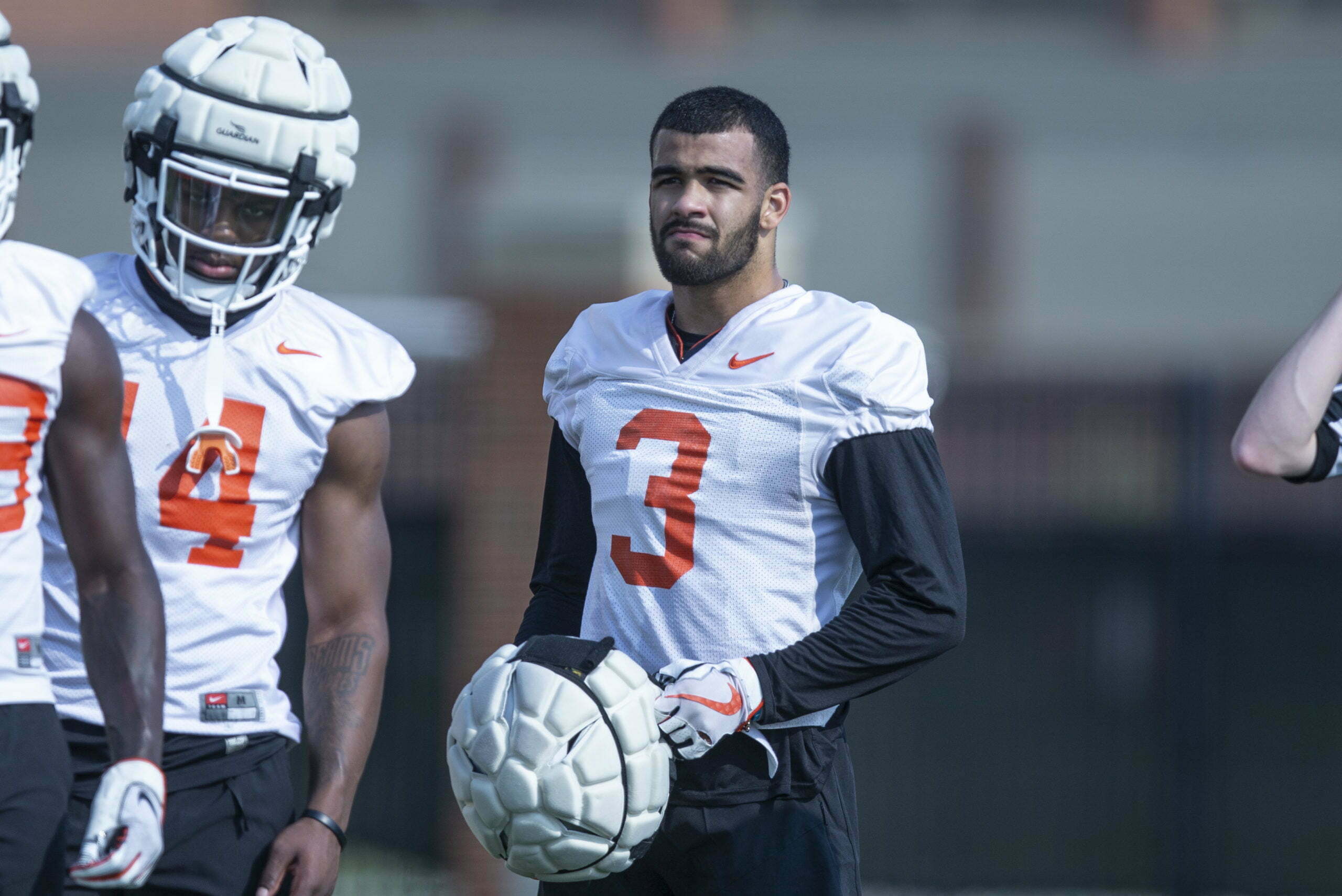 We already ran through some of the key characters to know from the Cowboys’ offense. Now let’s turn to the defensive side of the ball with a list of superlatives and quotes to get you ready for the Cowboys’ season opener this weekend.

With Rodarius Williams off to the NFL, OSU needs a new top cover man to step into the void, and it looks like the mostly likely candidate has been there for years. Safety covert Jarrick Bernard-Converse spent last year learning the ins and outs of cornerback and now looks set for a big senior year.

OSU defensive coordinator Jim Knowles called him “steady” and cornerbacks coach Tim Duffie even nicknamed him “Amazon” because he “always delivers.” Here’s Bernard-Converse on how he feels heading into 2021.

“I’m more confident than I’ve ever been before because I understand the job and I understand, like, more football,” Bernard-Converse said. “I’ve just been studying a lot more, so I feel pretty good about it. I’m ready to see what this year brings.”

Just because he’s the elder statesmen among Cowboy defenders doesn’t mean sixth-year linebacker Devin Harper can’t break out in 2021. When he’s been healthy, Harper has made the most of the snaps he’s earned, showing a knack for getting to the quarterback and for creating turnovers. Now that he’s the Week 1 starter, the expectations are even more lofty.

“Devin is one of the most complete athletes that I’ve been around,” OSU defensive coordinator Jim Knowles said. “He’s had some people in front of him, he’s had some injuries, but Devin has NFL numbers. He has all the markings of an NFL player in terms of height, weight, size, all the metrics, speed — his speed is fantastic.

It’s not your normal true freshman that is able to earn game reps during his first fall camp, but Oliver is not your normal rookie. Following in the footsteps of Calvin Bundage and Trace Ford, he’s the next Edmond Santa Fe pass rusher who’s ready to make a splash in Year 1.

“(Collin Oliver) is going to play. A lot based on different things, packages we use. I feel like he’s going to be in the game plan,” said Gundy.

He may not command the most headlines among members of OSU’s defensive front — he was designated with an “or” atop OSU’s DT depth chart last week — but regardless of when he sees the field, Evers is set to play a big role for OSU’s defense.

“He’s had his best summer ever,” said Gundy this fall. “I saw him in the weight room every day, even on off days, working on flexibility. He’s very mature. He’s been around a long time. His attitude’s great. I think he’s had his best summer, and in most cases, you’ll see that in the fall.”

Don’t Sleep On: Tre Sterling (Everyone else is)

Sterling is both criminally underrated, after being snubbed when the Big 12’s preseason all-conference lists, and the worst-kept secret in the league (especially if you read this site on a regular basis). He’s been a steady contributor on OSU’s defense for going on three years but had a breakout performance in 2020 — which apparently went unnoticed.

Sterling is one of the better cover safeties in the league, if not the country, and I have a feeling his name will end up on a few of those lists by the time we get into October.

He is just one of several veteran leaders on a salty OSU defense that returns almost everyone. He spoke about that at the start of fall camp.

“I don’t think I should’ve felt that comfortable for day one,” Sterling said. “It’s different than last year because we didn’t come in learning a new defense, we came in already knowing it so we were able to get right back to it. It feels good to be out there when we’re all working together, communicating and trying to help the young guys learn the defense and the playbook.”