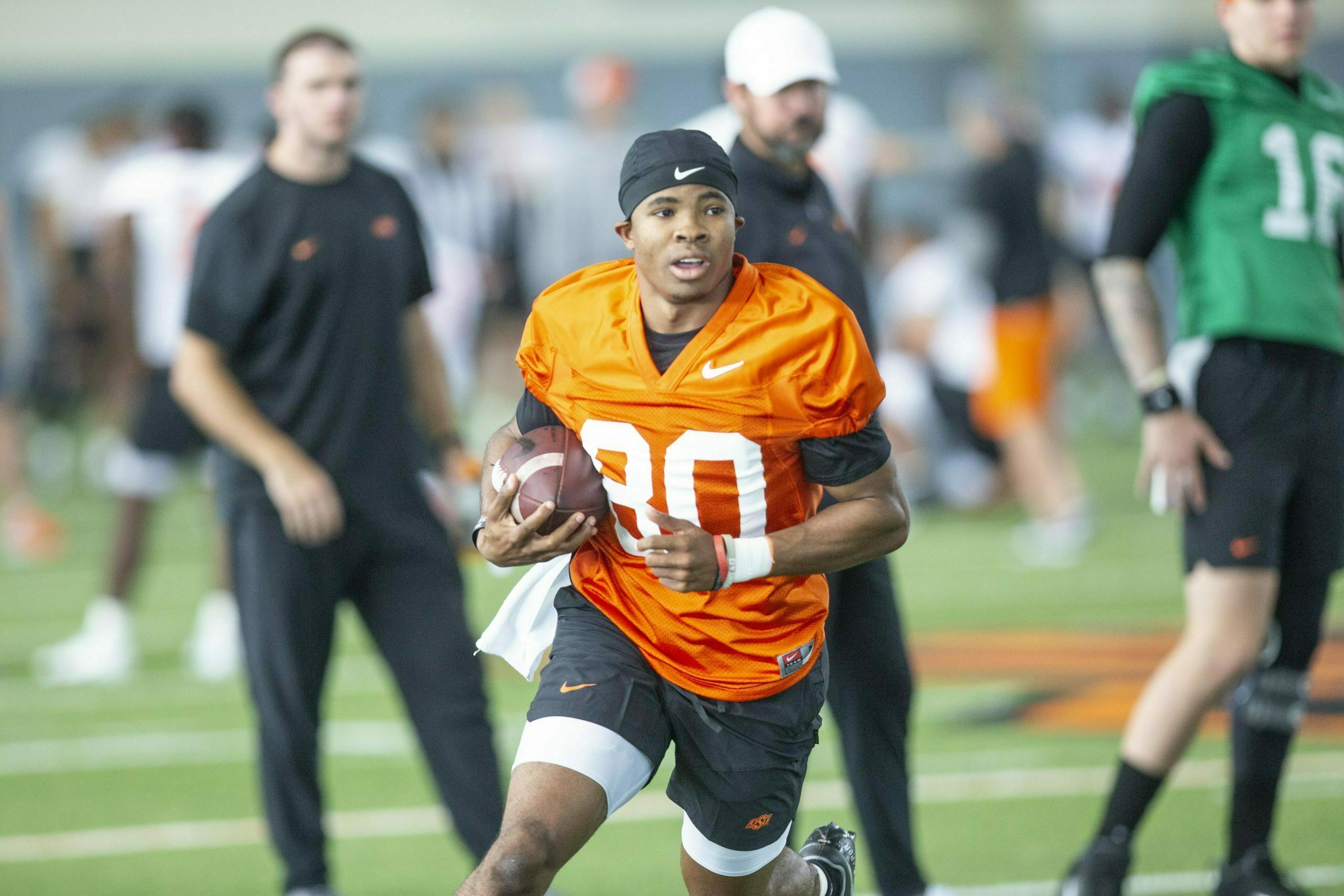 The long, arid college football drought will finally end this Saturday when Oklahoma State kicks off its 2021 season with a visit from Missouri State.

To wet your whistle, let’s take a look at some of the Cowboys set to make the biggest impact on the field this fall, with some insight from inside the program. We’ll start with the offense.

Next Man Up: Tay Martin

Tylan Wallace left some big cleats to fill, and they won’t be the best way to fill them isn’t by committee. But returning senior Tay Martin has a big frame and a big game and, from all we’re hearing out of fall camp, is up to the task.

Cowboys offensive coordinator Kasey Dunn called him “a hell of a player.”

“He’s playing great for us right now, taking over for Tylan. He’s taken on that role,” said Dunn. “When he first came in there was a little bit of ‘Ahh, I’m pretty good, let me play, I can do whatever I want to do.’ He’s bypassed that now, man. He’s all in.”

Presley had his coming out party, and a big one at that, with 118 yards and three scores in OSU’s bowl win over Miami. That’s left many ready to crown him the next great Cowboy receiver. Mike Gundy tempered expectations a tad but it’s obvious he’s excited to see 80 get the ball in space.

“He’s come a long ways,” said Gundy. “He started to get considerably better at the end of the year based on reps, settled in, started to figured out. You saw him improve, particularly in the bowl game. He had a month to prepare. Now he’s been here in the summers, and he’s kind of a guy that we’re used to. Once you know what direction you go, you can go really fast. Guys that are thinking, which is a young player at any position, they don’t play as fast. I think he started to take that next step. We’ll know a lot more in a couple, three weeks, but I would guess that his reps have gotten to a point where his comfort levels is getting pretty high.”

The role of most exciting Cowboy rusher — at least in my mind — seems to fluctuate weekly, which is a good sign for OSU’s depth. But I cannot get past Mike Gundy’s comments last week when he compared senior tailback Dezmon Jackson to one of the most underrated backs to ever play for him.

Somehow, the Pokes’ leading returning receiver has been relegated to a background character in this summer’s narrative. But the speedy home run threat might turn some heads this fall now that he’s finally back in his natural role.

“He’s a slot receiver. We’ve had to bounce him around a little bit at times with injury but that’s his strength,” said Gundy this fall. “He’s extremely fast, we all know that, and he’s very shifty. And he’s got enough strength to where he can block inside on nickel backs and safeties and such. That’s his spot. We’re expecting him to have a good year. He’s in good shape, and he’s very focused at this time. So if he’ll just stay the course, he should have a good year. If he stays healthy, and he’ll get a chance to play this game to the next level, all based on his work ethic from this point moving forward.”

Sanders has been nothing if not a polarizing franchise QB during his time at OSU. With eye-popping highlight plays set against head-scratching turnovers — and with injury limitations sprinkled throughout — it’s hard to know exactly how high his ceiling is, or how low the floor.

But benefiting from his first full year of coaching stability, his first full offseason — and what should be a much-improved offensive line — I think I’m more excited than skeptical for his third year at the helm, and where he could lead the Pokes offense. And Mike Gundy seems to agree.

“My personal opinion is last year the spring ball that he missed and summer conditioning because of COVID set him back,” said Gundy. “And I feel like in the two months that we watched him over spring ball, he’s developed more than he has in two years.

“So, we’ll find out once the season starts. There’s never been a question with his toughness, his commitment, and his competitive nature.”