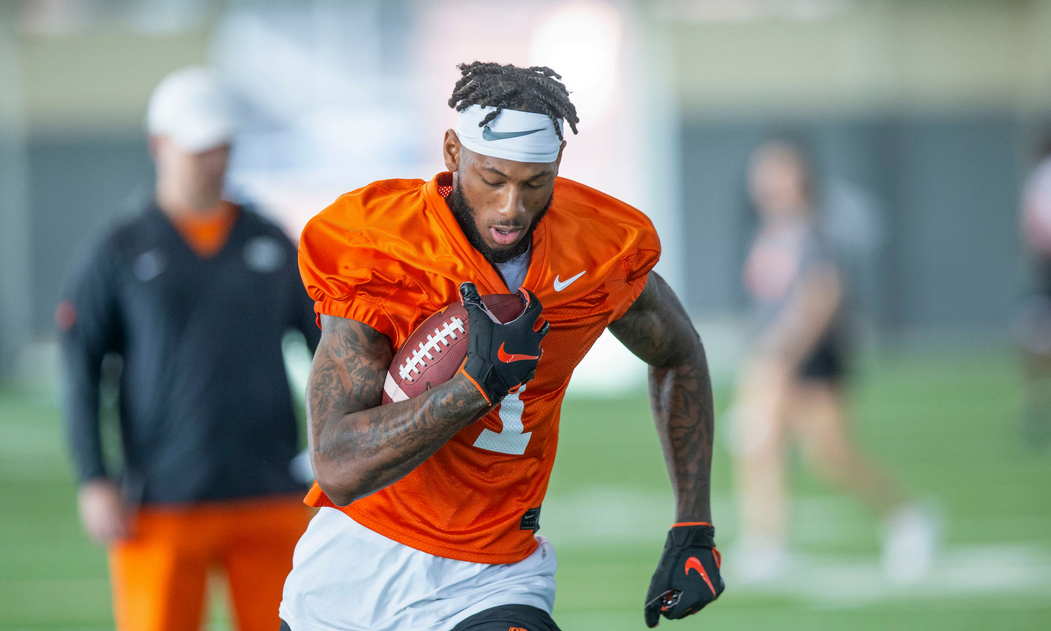 Everything about Tay Martin is big.

What you’ll first notice is his size: At 6-foot-3, Martin, Jonathan Shephard and Matt Polk all stand out as the tallest receivers in Oklahoma State’s position group. Big are Martin’s his talents, too, matching perfectly his big opportunity this season for the Cowboys to potentially emerge as the No. 1 receiver in one of college football’s best offenses.

“He’s a hell of a player,” OSU offensive coordinator Kasey Dunn said this weekend of Martin. “He’s playing great for us right now, taking over for Tylan. He’s taken on that role. When he first came in there was a little bit of ‘Ahh, I’m pretty good, let me play, I can do whatever I want to do.’ He’s bypassed that now, man. He’s all in.”

Martin arrived at OSU via the transfer route from Washington State last season. Behind Tylan Wallace on the depth chart, he didn’t record a stat the entire month of October and caught four total passes before the calendar turned to December.

It wasn’t until Dec. 29 — when OSU played Miami in the Cheez-It Bowl — that Martin fully announced himself as a force. With six catches for 73 yards, he emerged as a viable replacement for Wallace on the outside, and through the spring and summer he has solidified his standing as one of OSU’s best receivers by — how else? — doing everything bigger and better than before.

“He’s hitting the depths in his routes that we need him to hit,” Dunn said. “He’s catching the ball how we need him to catch it. He’s leading the other guys. I mean, it’s a full 180. He’s killing it right now.”

Big are Martin’s dreams, too. Excelling at OSU is on the to-do list this season, but he has the natural ability and the drive to be a football player in the big leagues.

“Tay’s got this vision for himself for the next 10 years,” said Dunn. “It’s playing NFL football. He’s driven right now.”

As a senior, this will be Martin’s big chance to showcase he’s worthy of a higher football calling. Mike Gundy said last month that OSU does not have a “marquee” player at the receiver position, and while Brennan Presley has no doubt earned hype as a potential star who has stepped into a leadership role, it seems under hushed breath that everyone is waiting, watching for Martin to make good on his big opportunity.

“It will be very interesting to watch how Tay Martin develops,” Gundy said in July. “We feel good about his development, after getting into our program. And he’s in really good physical condition now.”