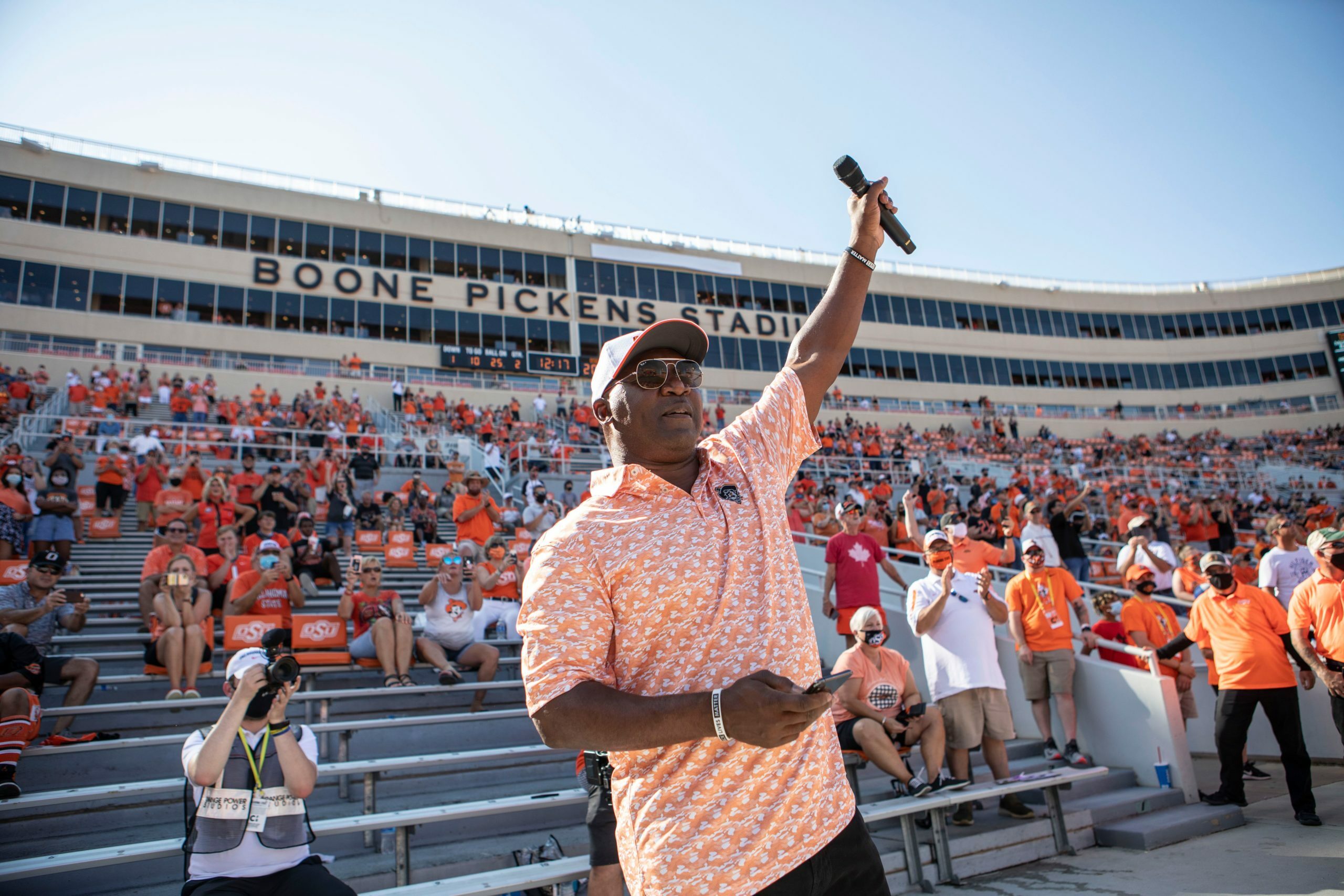 The man, the myth and the legend, Thurman Thomas, was inducted into Oklahoma State’s Ring of Honor at halftime of OSU’s eventual 27-13 win over West Virginia on Saturday.

Thomas is the first individual to be inducted into the group, expected to comprise only the most influential of OSU figures. To complete the honor, OSU unveiled his name on Boone Pickens Stadium’s inner border — directly above the stadium’s name.

“This is where my career began,” Thomas said Saturday in front of the crowd. “I can’t thank Oklahoma State enough for this honor. To be the first person, player receiving this is very humbling.”

For good measure, Thomas thanked his family, his friends, his OSU faithful. Then he hit the cabbage patch — an homage paid to his 1987 Sun Bowl performance.

And of course, LD Brown did the same after scoring earlier in the game.

OSU’s relations with its most famous alums have been a conversation point this week with Thomas returning and with Brandon Weeden bluntly speaking on the topic. By the sounds of it, former players want more contact, and want to feel more involved. So honoring a legend in Thurman is a huge step to resolving any tension that may be lingering because of that issue.

Thomas’ former quarterback, Mike Gundy, spoke about the induction on Saturday, and he made it a point to mention that the Ring of Honor idea was something he’d been pushing to have for a long time. Gundy is probably unfairly blamed for any alumni relation issues just because he’s the face of the program, but he nonetheless went to bat for his former Cowboys, and for Thurman, who earlier in the week expressed a desire to have a better relationship with Gundy and with the university.

“The ring of honor is something I’ve pushed for for a long time,” Gundy said. “We’ve got a number of really qualified football players that have come out of this place that can go on the ring of honor. We won’t be short with guys to put in the ring of honor. I told the team and other people my fondest memories of Thurman were against practice plays. He practiced harder than anyone I’ve ever been around. He went full speed all the time and took pride in it, which is why he played the way he played and why he was a tough guy.”