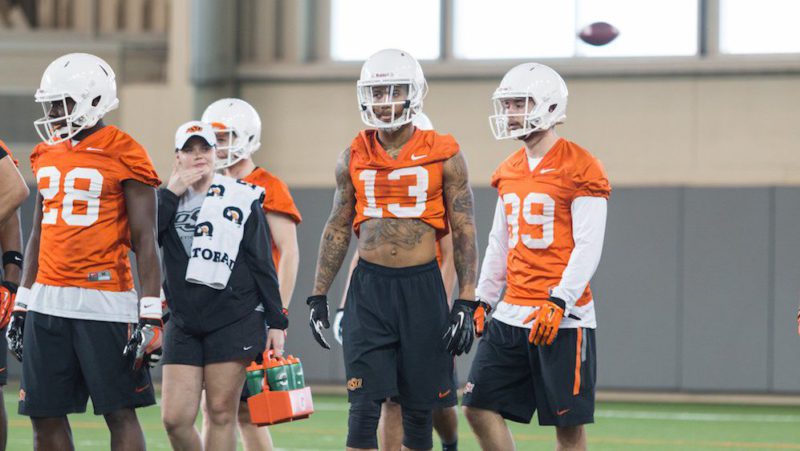 So much has been made of the 83 receivers at Oklahoma State this season, but that might not be the Cowboys’ best position by the time the highly-hyped 2017 season wraps up.

Here is a deep look at which position coaches have it made heading into fall camp and which ones might need to tinker with walk-ons by the time Tulsa hits the schedule Aug. 31.

Defensive coordinator Glenn Spencer is about to prove he either is a wizard of personnel or had far too much confidence in players who have hardly seen the field.

As mentioned, getting Adrian Baker was paramount. He has to start because who else will? A.J. Green is a name being thrown around. Rodarius Williams is another. But their dependability and leash for that matter cannot be high or long. Yet, with the first game of the season about a month away, there seems to be little urgency to fill that spot. Gundy brushed it off at Big 12 Media Days. Spencer seems confident enough, and to this point, none of the cornerbacks have gained any ground on the others to start.

But Spencer is a much sharper defensive mind than I.

If Gundy could have two players back from the 2016 roster, I think he might pick Blake Jarwin and Zac Veatch.

They were the prototype for what Gundy and OSU envisioned for the cowboy back position: one pass-catching tight end, one traditional fullback. Gundy has talked endlessly about the value those two brought to the locker room, the offense’s scheme and balance. Both are gone and will be replaced, as it seems, by Keenan Brown and Sione Finefeuiaki. Brown is a good player, and Finefeuiaki is a junior college transfer who hasn’t played yet, but let’s be real …

There will be at least four receivers on the field about 60 percent of the offensive snaps. And that might be a conservative estimate.

Earning his commitment as a fifth-year Cal transfer was perhaps the most vital, up there with Adrian Baker at cornerback. Without Cochran, Dylan Galloway likely would have been OSU’s starting left tackle protecting Rudolph’s blind side. Everywhere else on the offensive line is a reload. Center Brad Lundblade, guards Marcus Keyes and Larry Williams, and First Team All-Big 12 selection Zach Crabtree are all back. If one goes down though, things might get dicey. Quality depth is a concern.

Justice Hill is legit, but what would this team look like offensively if he weren’t on the field? I asked Rudolph that, and he said “We can play the ‘What if?’ game all day,” which is a rather bodacious way to go about a season in which reaching the College Football Playoff is a borderline expectation. Backup running back is about as locked down as the No. 2 cornerback spot, and that’s bad. Last year, Hill had the luxury of splitting time with Chris Carson, and Gundy talked at length about that throughout the season. He is with the Seahawks now, which means Hill will be backed up by Jeff Carr, Chuba Hubbard, JD King or LaDarren Brown. Lovely.

Hill holds the key to balance in the OSU offense. If he takes a vacation, so too does the entire offensive scheme.

OK, before you scroll to the comments, think about where this position will land on this list next season.

Mason Rudolph might be the greatest quarterback in OSU history, but there is virtually no one (right now) behind him. John Kolar, Keondre Wudtee and Jelani Woods combined to complete two passes in the spring game, and while Taylor Cornelius didn’t play poorly at all in that game, it’s a little worrisome to think about him potentially taking the opening snap in a Bedlam game next year. Luckily, Spencer Saunders is committed from Denton Ryan in Texas to the 2018 recruiting class. He is a four-star prospect, and Gundy has had a little snippet of success with those types of freshmen. But for now, this team is one Rudolph injury away from enigma.

The 3-3-5 defense is mostly why the tackles are above the ends (one fewer spot to fill), but the totality of the exterior of the defensive line is about as strong as it has ever been.

Cole Walterscheid started last season after Jordan Brailford suffered a season-ending stress fracture in his leg. Jarrell Owens started opposite and both played well, but neither are Emmanuel Ogbah or even Jimmy Bean. Another year in the system should help, but frankly, there just isn’t any one game-changer on the outside. That’s fine though because, like most of the roster, there is outstanding depth with Tralund Webber and Vili Levini (who will likely return at some point this season after a season-ending knee injury last year). Trey Carter could jump back outside, too.

Osborne had just 12 tackles as a backup for Vincent Taylor in 2016, but 5.5 of them (or 45 percent) were for losses. Although Daniels didn’t have as many drops for losses, he did rake in a few more total tackles. OSU also moved Trey Carter inside to tackle and signed Brendon Evers and Enoch Smith Jr., a junior college transfer.

Nobody knows for sure who the three starting linebackers will be in 2017, which is more of a good thing than a bad one.

I wrote a few months ago about the sneaky depth OSU has at linebacker this season, and I think there might be more now than there was then. Chad Whitener will undoubtedly start. The way Justin Phillips is being marketed makes me believe he will start, but that third spot is up in the air. Kenneth Edison-McGruder is the sexy choice but maybe not the obvious one. Star backer is a role Calvin Bundage played backup for last season and drew some eyes in the process.

With guys like transfer Patrick Macon, Kevin Henry, Devin Harper, Brendan Vaughn, Kirk Tucker, Gyasi Akem and Amen Ogbongbemiga there in the mix too, fresh legs will be the farthest thing from a problem in 2017. Right up there with receiver depth.

Tre Flowers was selected as OSU’s only representative on the First Team All-Big 12, but there is more to the picture.

Flowers is excellent in coverage. In fact, he might be the best in the conference at closing down on balls for pass break-ups. He is now paired with former cornerback Ramon Richards, who by the eye test, ticks all the boxes for what you’re looking for in a safety: quick, smart, athletic, fearless. At corner, he got caught on an island too often. At safety, he should have that added layer of protection from getting burnt downfield with a corner holding the receivers off the line for a few seconds.

Seniors Jerel Morrow and Darius Curry can play, and newly minted linebacker Kenneth Edison-McGruder can fall back, which makes for a nice-looking group potentially at the back end of the defense.

Tyron Johnson is eligible, and Marcell Ateman is back. Throw in freshman Tylan Wallace and add back Dillon Stoner, any way you slice it, this group is probably going to be phenomenal.

Coach Mike Gundy has given plenty of praise to receivers coach Kasey Dunn in getting high-profile guys like Johnson and Wallace on board while discovering relative no-namer Biletnikoff Award seekers like James Washington and Jalen McCleskey. The Cowboys two-deep is unparalleled and its three-deep is scary. The fact that either Wallace or Stoner will be McCleskey’s backup to the backup is mind-boggling.

I will be updating these rankings monthly as the season begins and wears on but with different metrics, so be expecting them at the beginning of each month this season.