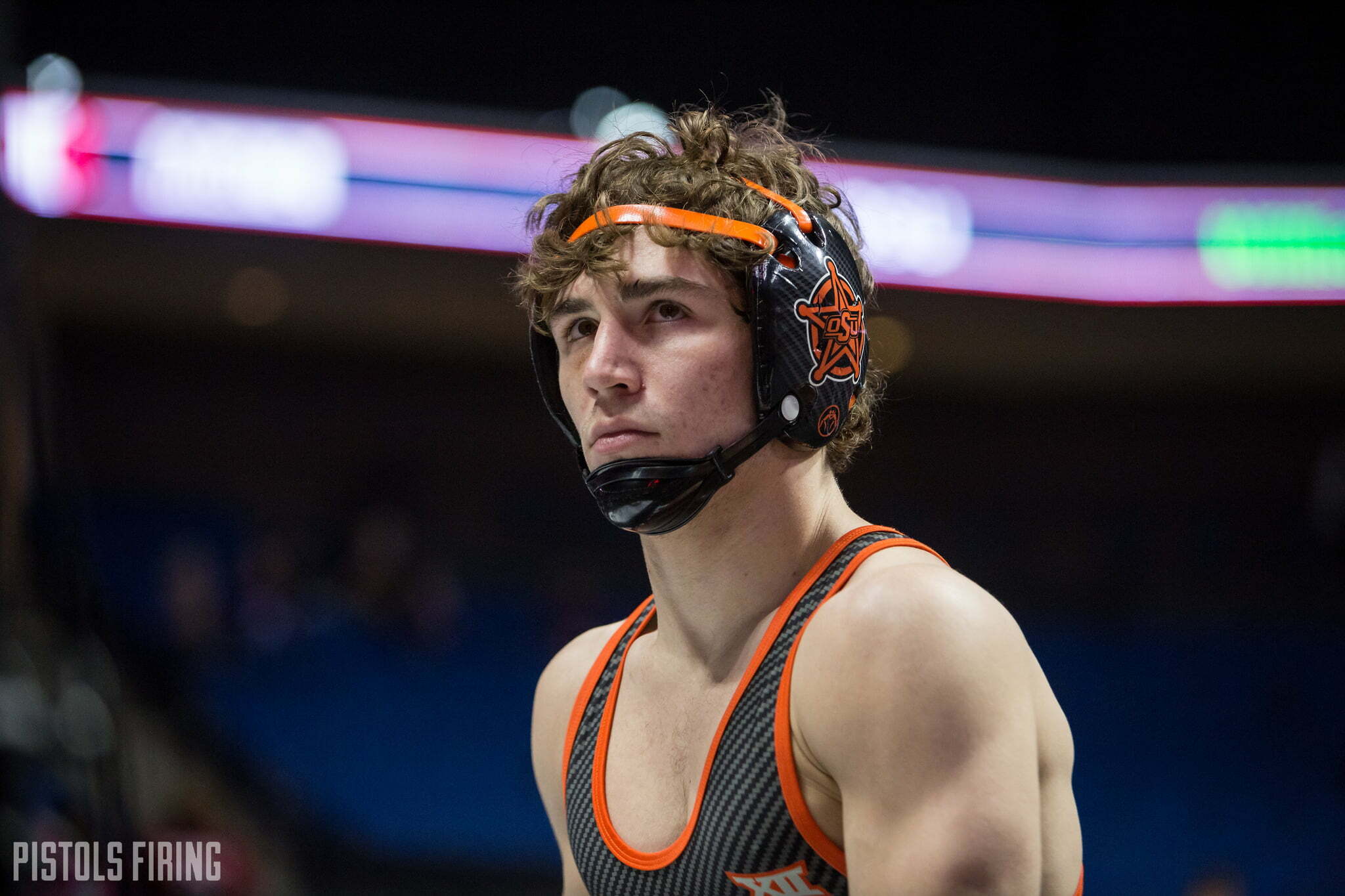 In Session 2 on Thursday, OSU got off to a good start with comfortable wins by Daton Fix and Nick Piccininni. Piccininni majored a pretty solid wrestler in Elijah Oliver, and Fix won 9-3 over Matthew Schmitt.

But then Kaid Brock dropped the first bout of the round for OSU as he fell to No. 2 seed Joey Mckenna from Ohio State 14-1.

With no entry at 157 and first round losses for the Cowboys there was a bit of a break before Jacobe Smith came up to wrestle Mikey Labriola from Nebraska at 174. Though seeded lower Labriola beat Smith in their only prior match. Smith got the first takedown and was up in the second period 3-1. A funky exchange gave a takedown and two back points to Labriola. This put Smith in a hole he couldn’t get out of. He opened up with a few shots trying to come back in the third and lost 8-4.

Dakota Geer got off to a rough start against Iowa State’s Sammy Colbray giving up two takedowns in the first. The rest of the match was fairly quiet until a late exchange where Colbray got a takedown and Geer got a quick reverse. Colbray went on to win 7-4. It was a tough loss as this bracket opened up a bit after a few upsets and it looked like he may have a shot to make a run. He’ll now have the No. 2 seed in his path on the consolation side.

Preston Weigel gave up the first takedown in his match with Eric Schultz. He got a quick escape and takedown of his own. He followed it up with a ride-out to lead 3-2 going into the second period. A quick escape in the second period gave Weigel a 4-2 lead he never relinquished. He got another take-down and ride-out in the third to win 7-2 with riding time.

Derek White picked up the first take-down then gave up an escape. The rest of the match was fairly quiet until a late take-down by White finished off the match 5-2.

All the heavy hitters won which is great. To finish high in this tournament you need some of your lower seeds to be winning in these rounds. Jacobe Smith took an early loss last year and fought back, as did Kaid Brock. The Cowboys will really need both of them to do that here along with Geer and Joe Smith. They all have tough roads back.

“Each round gets a little tougher, and it’s really important that as a team you get a little tougher,” John Smith told reporters. “It wasn’t the greatest round, but it wasn’t bad. We pushed four to the quarters.”

On the consolation side Kaden Gfeller went home early after a loss to Josh Maruca. That was a big hit for the Cowboys in the team race as Gfeller who was seeded 7th will score no team points at this NCAA tournament.

Joe Smith picked up a 3-1 win over Jonathan Viruet of Brown.

This next round is what pays the bills in this tournament for the team race. Each win on the championship side guarantees a placement of sixth of higher for the Cowboys and six additional team points with each win. The guys on the consolation side still have to fight through a few more rounds to have a shot to All-American.