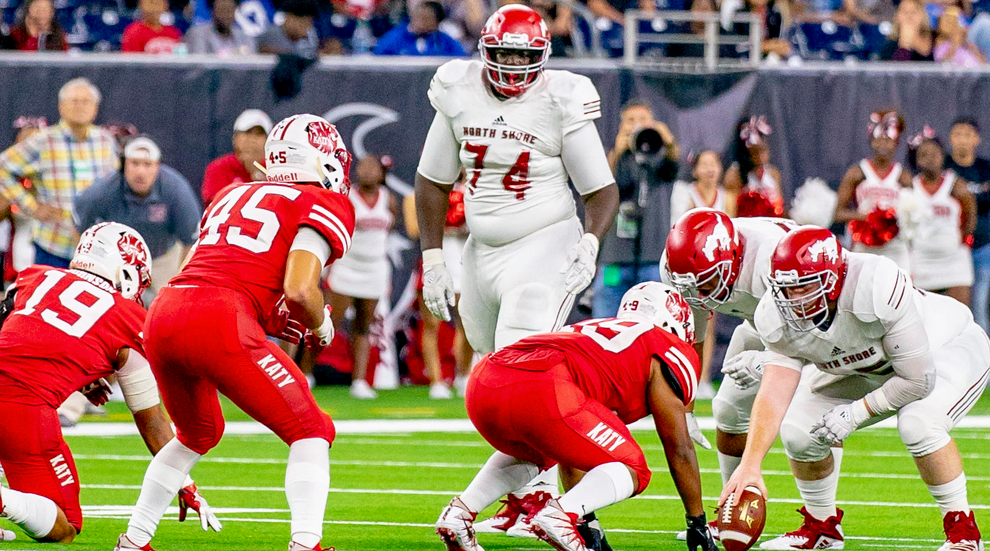 You’re probably thinking to yourself right now: “Why did Russell Okung return to high school to plow holes for North Shore?”

I regret to inform you that the picture featured in this article is, in fact, not Russell Okung. That is Damieon George — one of OSU’s biggest targets in the 2020 class. He is a junior in high school.

George included OSU among his top 10 schools over the weekend, trimming down from 22 total offers. He’s a big deal.

But he’s an especially big deal because of his relation to another 2020 target — Zachary Evans. Evans, a five-star running back ranked as the No. 2 prospect in 2020, also included OSU in his recently-trimmed schools over the weekend. Landing both would make for an OSU-sized coup. Mike Gundy wouldn’t have enough emoji space in a 240-character tweet if he were to pull them both. He’d have to create a thread!

George has offers from Alabama, Auburn, Florida, and a slew of other major programs. His top 10 in no order is Texas, LSU, Penn State, Texas A&M, Oklahoma, Alabama, Oklahoma State, Georgia, Ole Miss and Mizzou — nearly a mirror-like reflection of what his running back Zachary Evans’ top 11 looks like.

George recently said Texas is “at the top” for him, and while Evans’ crystal ball reads mostly Texas A&M, I’d say the same about him and Texas. A packaged deal may be in the works for both to land in Austin.

In any case, don’t rule out OSU just yet. Evans is a long shot in my eyes, but George is less so because of the presence of Josh Henson, who is a dynamo recruiter building OSU’s offense from the inside out. George fits the mold of a physical freak and plower who can play tackle with his mobility, but has versatility to probably play inside, too. Take a look at his highlights below from his sophomore season, and it’s no wonder he’s one of the top-ranked offensive tackles in the entire country.