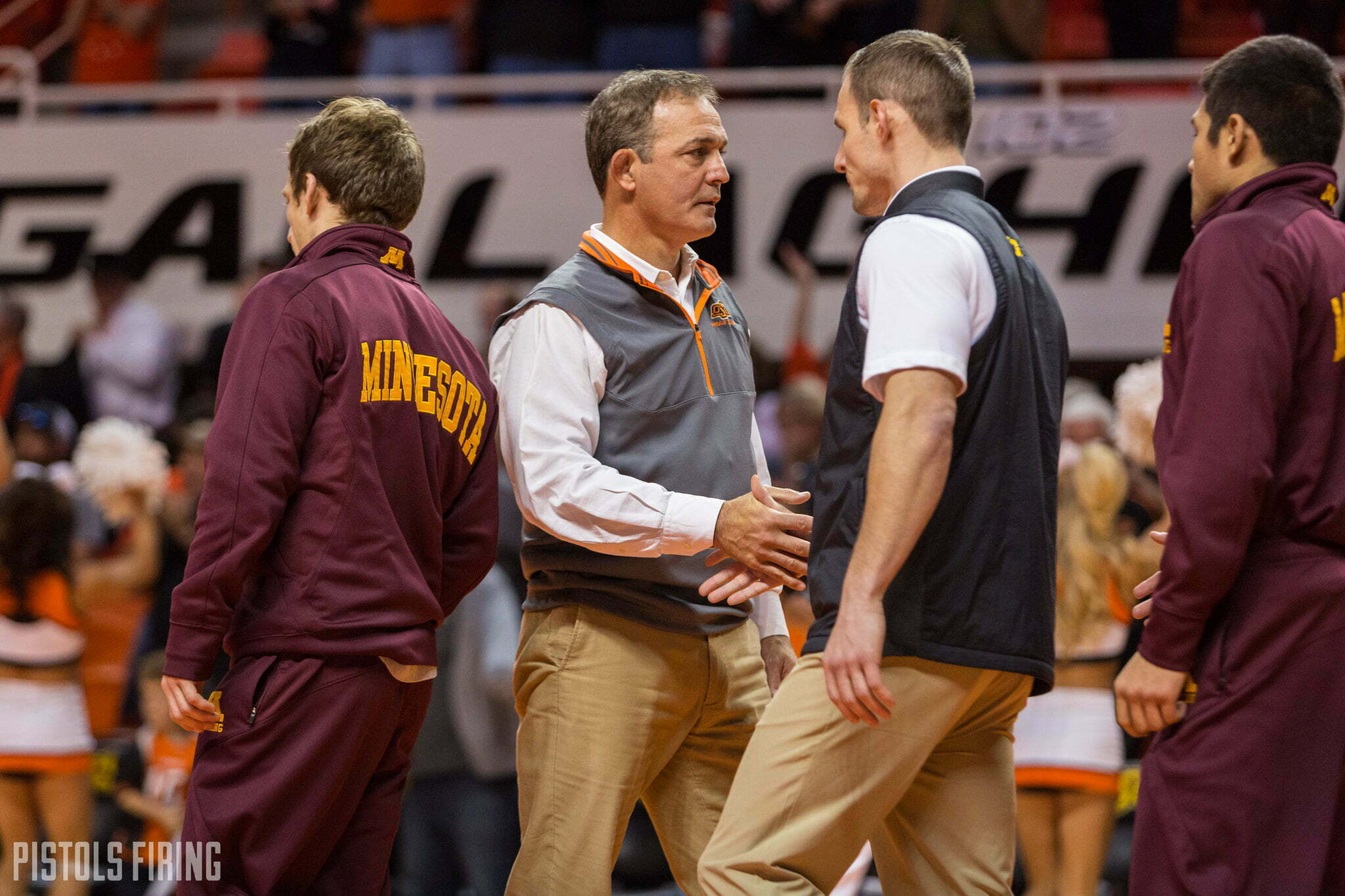 Oklahoma State went up against Minnesota in their first outing in Gallagher-Iba this season. Overall the Cowboys looked pretty good and picked up a solid 21-12 win over the Gophers. Here are my five thoughts on the dual.

1. Another pretty good crowd: Last year Oklahoma State averaged more wrestling attendees than any time in the past 18 years and possibly ever. Kicking off what is certain to be a bit of a rebuilding season, fans are still showing up.

OSU reported attendance of 5,324 on Sunday. With the Cowboys coming off a loss and this dual not being a big rivalry matchup, that’s a really solid crowd. It’s actually better than any home dual for the Cowboys last season, except for the sellout crowd vs. Iowa. The next closest was Bedlam with 5,238. That’s significant.

There seems to be a pretty direct correlation between crowds and recruiting as OSU landed one of their best recruiting classes ever this season while also setting a record average attendance. Keep doing what you’re doing fans.

2. Montalvo might be too small for 197: A big topic of conversation for Oklahoma State fans has been and will continue to be: What’s the best lineup for OSU at 184-197?  What they’ve utilized so far is Anthony Montalvo at 184 with Dakota Geer at 197. For the first time this season one of that pair has taken a loss as Montalvo fell 4-3 to Owen Webster. Webster is built like a truck, and Montalvo seemingly couldn’t physically move him like he has other 184s. Which stands to reason if he was to move up to 197 he would possibly have the same issue with a lot of the bigger physical guys there.

3. Great bounce back for Witcraft: True freshman Reece Witcraft made his first official dual start just last week vs. Drexel. He fell in that dual and didn’t get an opportunity to shake that off in the dual the next day vs. Lehigh after a medical disqualification.  To the delight of the crowd, he came back and picked up a huge fall in the second period that helped give a boost to propel OSU to win this dual.

Witcraft comes back from being down 8-1 to lock up a cradle and put the Pokes up 9-0 on the Gophers!#okstate pic.twitter.com/Oh23kNr3TK

The great thing about it was the way he came back. After finding himself down 8-1, he had two really slick ankle picks that showed a bit wider array of attacks in his offense than we’ve previously seen and really got the other guy off balance.

This allowed him to manufacture the cradle and get the pin, which is a very positive thing to see from a young wrestler who’s still cutting his teeth in his first season of college wrestling and his second true start.

4. Overall a good outing for OSU: I said it last week in my five thoughts, but the trend has continued here. Overall the Cowboys are wrestling well. The message board discussion on the team so far has been dominated by the skin-check controversy from last week and the unexplained absence of Kaden Gfeller and Joe Smith, but the product we’re seeing on the mat from the wrestlers that OSU is putting out is not a bad one.

Dusty Hone hung tough with Minnesota’s best wrestler, Boo Lewallen found a way to win against a tough, young guy and, most importantly, looks healthy. Travis Wittlake looks like the superstar recruit he was touted to be out of high school. Dakota Geer, Boo Lewallen, Nick Piccininni, and Wittlake are all undefeated. Overall this group looks pretty solid and has been wrestling well.

5. Pretty good product on ESPN+: This is the first year we’ll be seeing Oklahoma State home duals on ESPN+. They were formerly on FloWrestling, which has had streaming rights for the Cowboys home duals for years.

What OSU put together with ESPN+ was pretty good in my opinion. J Carl Guymon and Lee Roy Smith were the broadcast team, and these are two guys that have called televised duals for years and are very knowledgeable. I had no issues with the stream and haven’t heard much feedback from anyone that said they did. Fans got a post-match interview from John Smith and all the way around it seemed like a really good broadcast.