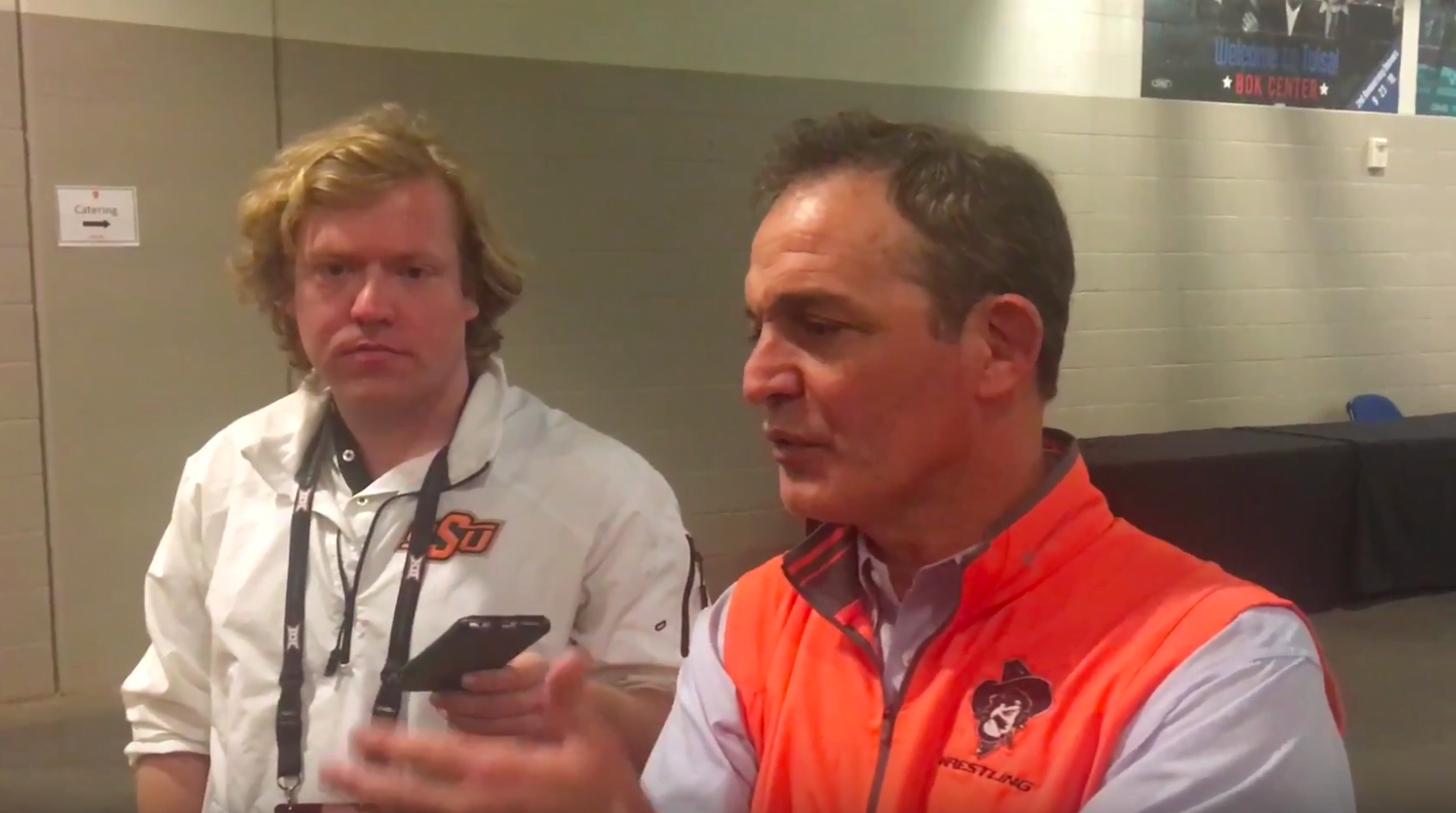 About five minutes after 197-pounder Preston Weigel’s record-setting match, he and the rest of the Oklahoma State wrestling team were the only men on the dimly lit, worn practice mat in the recesses of the BOK Center.

The Cowboys’ coach John Smith stood some 50 yards away talking with reporters about his team’s performance after sending a record 10 wrestlers to the finals of the Big 12 Championships. One for each weight class. Smith had just witnessed a feat that couldn’t even be accomplished with four teams in the conference, let alone nine others.

He had just witnessed perhaps the most dominant day in OSU wrestling conference history.

“I’ll say it,” Smith said. “I think we wrestled our very best we’ve wrestled all year long. There isn’t any question, and that’s what you want. That’s what you work for, but it’s not over.”

That about the highest praise a Smith-coached team will ever get. He is stingy with his compliments. He is the Bill Belichick of wrestling. Smith’s comment was still almost an understatement though. OSU wrestled 20 matches and lost none.

If the Cowboys and their Saturday opponents were in a dual meet setting, OSU would have won 94-0.

That is about as whipping a stat as you will ever find in the sport of wrestling. That’s against some Big 12’s best. The most points the Cowboys could have scored was 120 with 20 six-point falls. They didn’t get 20. They got seven. That’s 35 percent of the matches.

If you split the two sessions, the Cowboys would have won 53-0 in the quarterfinals and 41-0 in the semis. A 53-point win would have tied the fourth most lopsided win in program history.

That’s a signature, but Smith said it’s not a peak.

“You say the word, ‘Peaking,'” Smith said. “‘Peaking,’ is a state of mind. It’s not what you do. It’s not that you train differently. You tell yourself that, ‘I’m gonna wrestle better than I have all season long, and I’m gonna do it.'”

With sweat still fresh on Weigel’s brow after his 9-0 victory against No. 2 seeded Nate Rotert, he was on the mat. He wanted more. He clearly craved more. He didn’t even take his ear guards off.

That’s what makes orange and white ‘V’ on the front of the OSU warmups so special. It means more than a brand. As Weigel ran back to the practice mat, his warmup jacket didn’t only carry a history.

It carried that state of mind. And with the finals of the Big 12 Championships beginning at 1 p.m. Sunday, it’s hard to believe that mindset will fade between now and then. But with an 85-point team lead, they can probably afford to. Just don’t expect Smith to. He isn’t ready for this team to hit its peak.

“I don’t wanna get ahead of myself,” Smith said. “We’ve got 10 matches tomorrow that are real, real important for us as we go into the NCAA Championships.”