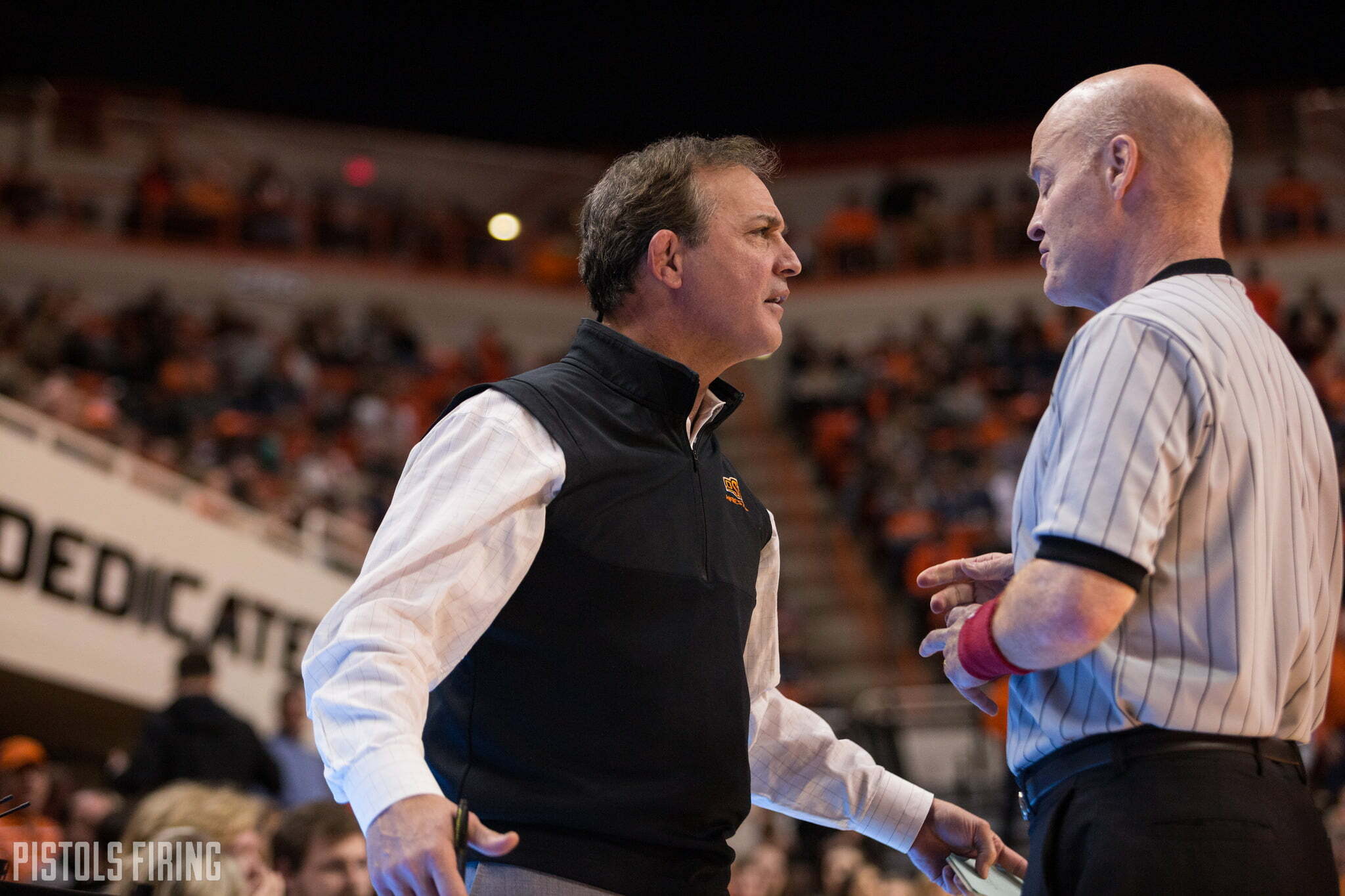 The Cowboys knocked off Wyoming 27-6 on Sunday in their first dual at Gallagher-Iba Arena this season. Here’s a complete recap of each match, starting at 141.

141 — Kaid Brock vs. Sam Turner: Brock started off with five takedowns in the first and takes a 10-5 lead into the second. Brock started on bottom in the second, and gave up a bit of a ride then got a reverse with about 30 seconds left and cut Turner loose to go up 12-6 heading into the third. After an exchange of a few more scores Brock win 14-10.

149 — Kaden Gfeller vs. Jaron Jensen: No scoring in the first. Wyoming got an escape in the second, but Kaden got a TD and turn to go up 6-1 at the end of the second. He then got a quick reverse at the beginning of the third to go up 8-1 and a ride out to pick up a major at 9-1.

157 — Andrew Shomers vs. Dewey Krueger: Shomers fought for position throughout the first pushing to set up shots. He forced two stall calls on Wyoming and went up 1-0 at the end of the first.

Shomers was on top to start the second and got close to a few turns, but no points. Shomers took top in the third and rode almost the whole period before Wyoming hit a funky roll and almost put him on his back. Shomers gave up an escape and won 3-1 with riding time.

174 — Jacobe Smith vs. Hayden Hastings: Quick takedown for Jacobe Smith then an escape for Hastings. No more scoring in the first. Smith went down to start the second. He gave up a ride for a bit then got a reverse with almost no time left to go up 4-1 going into the third. Quick escape for Hastings in the second. Hastings then got a takedown and ride again. Smith hit a gramby at the last second and got a reversal to go up 6-4. Final score is 6-5 due to Hastings riding time. Wyoming challenges call on the reversal and it does not get overturned.

Jacobe has ice in his veins! This reversal as time runs out gives him the victory over Hastings. Daton Fix up in 5 matches. https://t.co/EAAIhWoJsC pic.twitter.com/M3w06uQGsV

Geer pours in on in the third to secure the major. 3 more matches before Daton Fix makes his Gallagher-Iba debut. pic.twitter.com/yccrHhQaeK

197 — Andrew Marsden vs. Cale Davidson: Davidson gave up an early takedown and got a quick escape. Marsden hit a slide by to go up 3-1. Marsden gave up a reversal then got an escape. Started the second on bottom and got an escape and gave up a takedown. Marsden down 6-5 going into the third and was on top to start. He rode for a while and erased the riding time. Davidson got a reversal and took an 8-5 win.

Live by the spladle, die by the spladle. Davidson takes out Marsden and we are 2 matches away from Daton Fix vs Montorie Bridges. pic.twitter.com/l6aK6EEVIC

285 — Derek White vs. Brian Andrews: A lot of hand fighting in the first then White hit a single late in the period to go up 2-0 at the end of the first. Andrews down to start the first and got a quick escape. No more scoring in the second. White started down in the third and got a quick escape. He then got another takedown and gave up an escape. White closed the match out with a takedown to win 8-2.

Don't let the bulk fool you, Derek White is fast. 125 lbs is next, then Daton Fix's Gallagher-Iba debut. pic.twitter.com/ucNXTE7MKO

HWT | White gets a penalty point and takedown to round out the match. He gets the 8-2 decision. That locks up the team win barring a loss of team points. #okstate pic.twitter.com/p2yUKw6WQW

125 — Nick Piccinnini vs. Cole Verner: Piccinnini got the first takedown at about one minute into the match. Nick got two near fall then Verner escaped. Nick got a late TD to take a 5-1 lead into the second. Nick started on bottom and got an escape. Verner got a takedown to make it 6-3. Piccinnini got another escape to extend the lead 7-3.

Very slick takedown for Nick and he went up 9-3 heading into the third. Verner started the third on bottom, Nick rode for a bit and Verner eventually got the escape. Nick got another takedown and rode out the period to win 12-4.

Nick Pich is too slick! pic.twitter.com/Tnkhzn3Pfj

133 — Daton Fix vs. Montorie Bridges: Daton started his Gallagher-Iba debut with his standard methodical charges into Bridges. Took shots, pressured offense. Bridges got a stall call. Fix continued to push and Bridges got another stall call. Fix went up 1-0. Bridges started off the second on bottom. Daton rode for a bit, got both legs in at about one minute into the second period and rode out the period. Daton went down in the third, got a quick escape and went up 2-0. They exchanged some offense with no scoring and Daton got a 3-0 win in his first match in GIA.