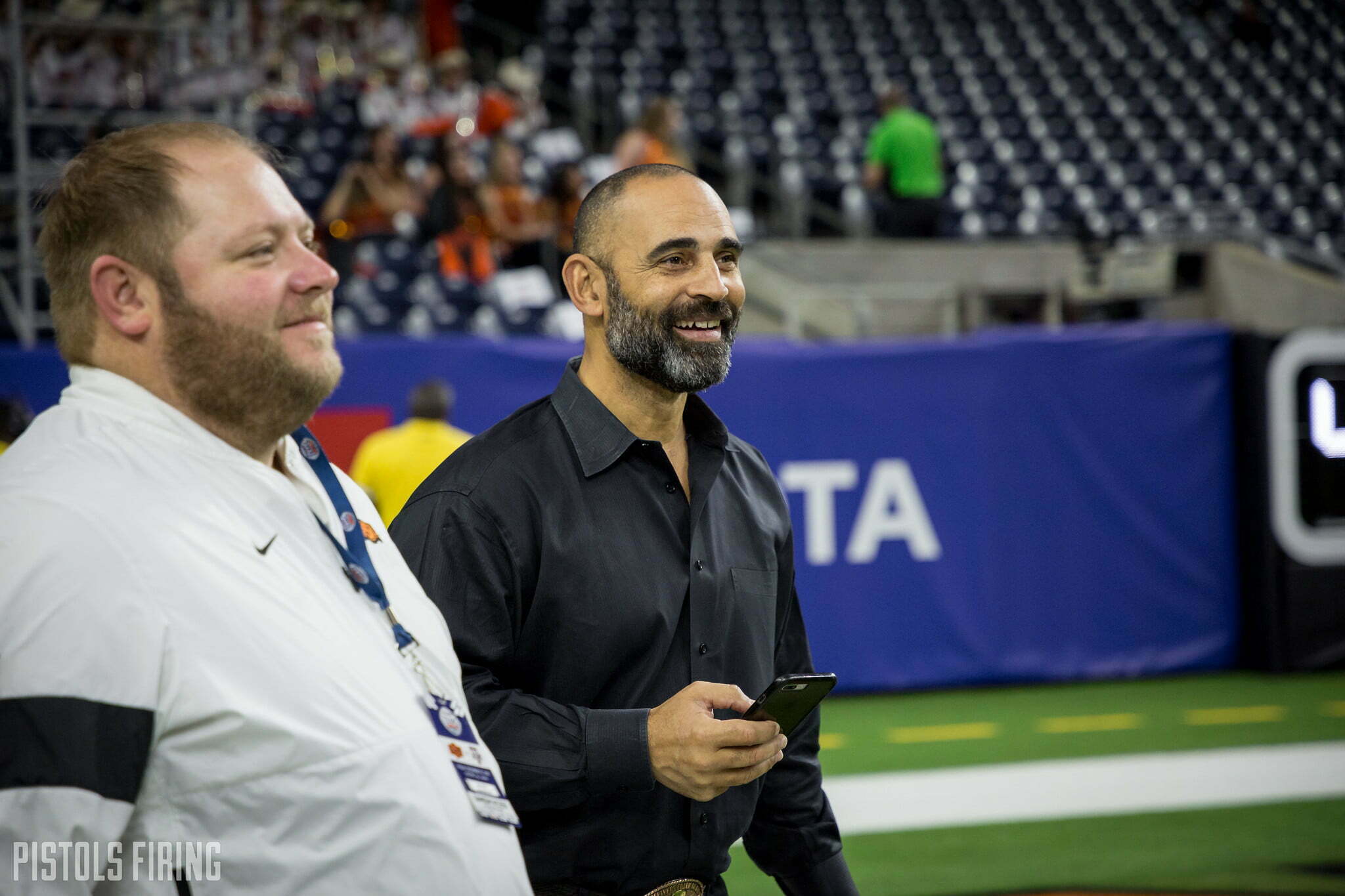 Last week in the PFB+ Forum, my guy Phil had a fun idea for a post. Phil suggested that someone at PFB break down Oklahoma State’s first drive of the second half against Oregon State. Why this particular drive? Well, during this offensive series, the coaching staff that’s normally upstairs, including former offensive coordinator Sean Gleeson, were all stuck in an elevator.  Due to this, recently promoted offensive coordinator Kasey Dunn was in charge of calling the plays.

Having been with Oklahoma State since 2011 as the wide receivers coach and not having any experience as an offensive coordinator before his time at Oklahoma State, there’s not much we know about Dunn’s offensive style. Now, I’m not saying this 10-play drive really tells us a lot, if anything at all, but it’s all we really have to learn anything about Dunn as a play caller.

Below I’ll show all 10 plays of this touchdown scoring drive and break down each one. Before I start, I did want to note something Adam Lunt of the Tape Doesn’t Lie Podcast mentioned to me when we were discussing this drive. A lot of teams will script the first 5 to 15 (sometimes more) plays of their opening drive of each half. It’s not always followed in order, but coordinators will also have a list of formations and plays they will run for that first drive until they get into a situation that causes them to deviate from the script, like if they get into the red zone or have a third and inches. Los Angeles Rams coach Sean McVay explains scripting in more detail in this article from The Ringer.

McVay notes that he comes into each game with 20 “openers” or “priority plays”—calls that “knowing we’re in normal down-and-distance, operating where you’ve got your run-pass balance, [that] we know at some point we want to get it called.” For most coaches, third-down plays have a separate section on the call sheet; in fact, many are broken down into subsections depending on the circumstance. “If things go great, you’re going to just go right down that list,” McVay says. “[But] it’s not realistic.”

I wanted to point this out because although Dunn was calling the plays, some of them may have been scripted by Gleeson. Although, I still think this drive does give us a glimpse into Dunn’s mind as a play caller. Okay, now let’s get to the drive.

Play One – First and 10 from the Oklahoma State 29

The first play of this drive is very different from the next several plays. The Cowboys come out in a 12 personnel look (two tight ends and one running back), with Cowboy Back Jelani Woods lined up on the line of scrimmage to the right, and Cowboy Back Logan Carter in the H-Back position next to Woods. After the snap, quarterback Spencer Sanders hands off to running back Chuba Hubbard on the Inside Zone run.

On Inside Zone, if an O-lineman has a defender lined up in front of him, he blocks him. If he doesn’t have a defender lined up in front of him, then he steps toward the side the play is going and either helps double-team block a defender or moves to the second level. The running back is normally looking to run off the outside hip of the guard, as opposed to the Outside Zone, where the offense is looking to stretch the defense horizontally. See the image below for further explanation.

Hubbard gets a decent push from his offensive line and picks up four yards. In addition, a facemask penalty gives the Pokes another 15 yards added onto the play.

Next, OSU comes out in a 10 personnel (one running back and no tight end) formation with two receivers split to each side. The receivers run a mirrored passing design on each side, meaning they are each running the same route concept. The concept here is a Hi-Lo Hawk Concept, in which the outside receiver runs a “go” or streak route up the field, and the inside receiver runs an out route. See below for a diagram of this concept. 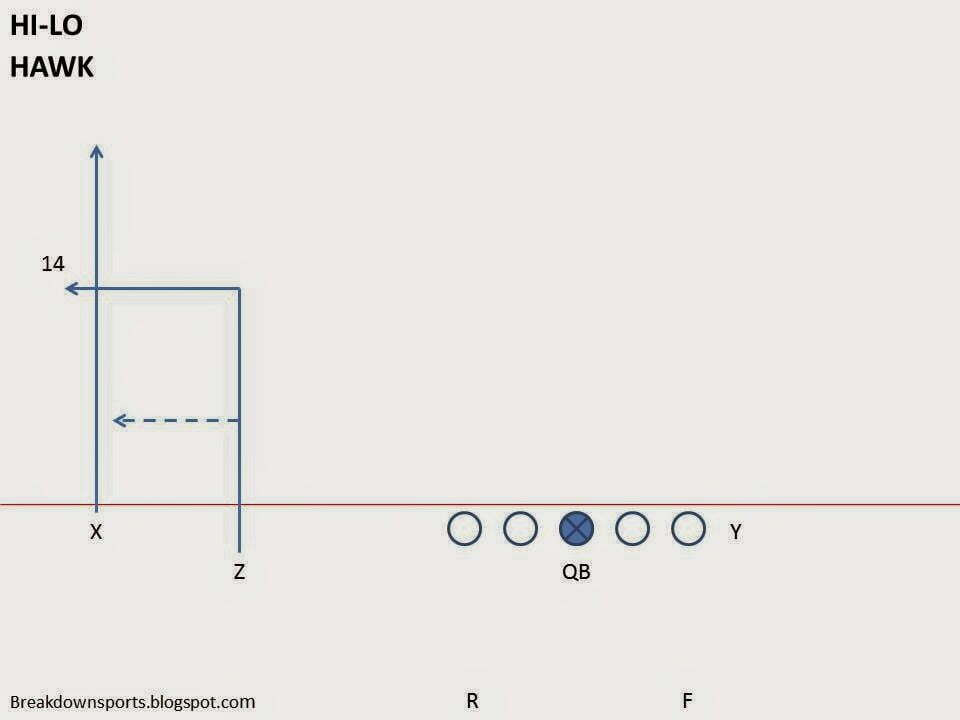 This concept is perfect for the play call here. As you can see, Sanders takes the snap, looks up field, then keeps it and runs on the QB Draw. The route concepts brings defenders to the sideline and down the field, leaving some room in the middle for Sanders to operate with his legs. As Oregon State sends a blitz from the second level of the edge, Sanders has nothing but open field and picks up 21 yards.

Now OSU is going with tempo, getting quickly to the line of scrimmage after the big gain by Sanders. That being said, they are in 10 personnel again and have two receivers split wide to each side. This concept is similar to the one above, only this time the outside receivers are running post routes. This “Depot” concept (shown below) is used to attack the defense both horizontally and vertically. 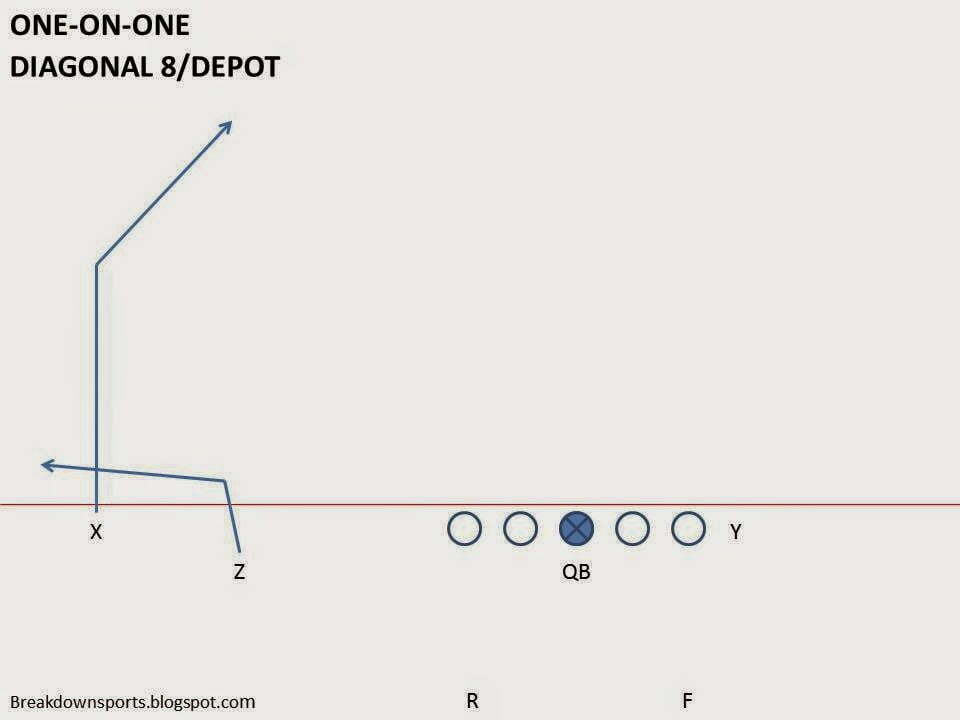 Sanders sees the Beaver defense playing off the slot receivers and makes the quick throw out to Landon Wolf for a five-yard gain.

Play Four – Second and Five at the Oregon State 30

Oklahoma State tried to keep with the tempo after the quick pass to Wolf, however, an Oregon State player goes down with an injury. After the stoppage, the Cowboys come back out in 10 personnel again, showing Trips to the short side of the field. The Trips look gets star receiver Tylan Wallace in single coverage to the wide side of the field. Seeing the single, loose coverage on Wallace, Sanders knows exactly where he’s going with the football even before the ball is snapped.

After the snap, you see the receivers to the Trips side execute a screen for Jordan McCray, but Sanders is already throwing the ball to Wallace on the hitch route. This results in a six-yard gain.

Here we see mirrored route concepts again out of 10 personnel. This time it’s the bubble screen, shown in the image below. 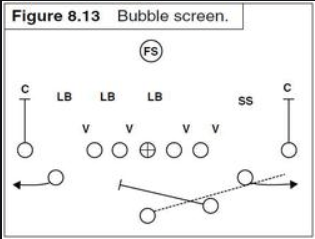 Wolf is the receiver here and picks up six yards on the play.

Play Six – Second and Four at the Oregon State 18

The Cowboys are now lining up for their first play in the red zone. After three straight passes, the Pokes go with a running play here. They continue with their fast tempo after the bubble screen to Wolf, and line up again in a 10 personnel Trips formation.  The receivers run the same route concept as they did above, a screen to the Trips side and Wallace on the hitch route on the other side of the formation.

On the previous play, the linemen blocked for a zone run, even though Sanders threw the ball, so the defense gets the exact same look here, as Dunn is building off the play shown before. Sanders decided to keep it himself on the zone read, but the Beavers play solid defense all around and stop this play for no gain.

Play Seven – Third and Four at the Oregon State 18

The Pokes now face the first third down of the drive. For this play, they bring a Cowboy Back back onto the field, as Woods lines up as the H-back to the bottom of the screen for an 11 personnel look (one running back and one tight end). OSU goes with another zone run, and this time Hubbard makes an excellent cut back to spring himself for a 12-yard gain.

Play Eight – First and Goal at the Oregon State 6

Oklahoma State decides to begin their goal line series with a pass play. Here they are in 11 personnel again, with Woods lined up as the inside receiver to the bottom of the screen. This play is designed for the back shoulder throw to Wallace to the top of the screen. Wolf runs an out route from his inside receiver spot, and Sanders tosses it up to Wallace in the end zone.

Wallace makes the grab, but his foot lands out of bounds for an incomplete pass.

Play Nine – Second and Goal at the Oregon State 6

Dunn goes back to 12 personnel for the first time since the beginning of the drive, with Woods and Carter lined up on the right side of the formation. Additionally, we see the first pre-snap motion of the series as Wallace comes across the formation on the jet sweep motion. The Pokes go back to the running game here with Power.

On Power, the backside guard will pull around to the play side to lead block through the hole. This is different from a zone run in that the offense’s point of attack is predetermined and the running back is not looking to cut back and find the open space. Marcus Keyes is the puller here as Hubbard pushes forward for a four-yard gain.

Play Ten – Third and Goal at the Oregon State 2

On the final play of the drive, the Cowboys run the exact same play as above. However, instead of following Keyes on the pull, Hubbard bounces it outside for the score.

There were several interesting things which stood out to me on this drive. First, Dunn went away from the Cowboy Back until OSU entered the red zone. Also, most of the passing plays involved quick routes or screens, and Hubbard primarily stayed in to block as opposed to running a route. In addition, there wasn’t much pre-snap movement until the final two plays of the drive.

As I mentioned above, a good majority of these plays could have been scripted, especially until the Cowboys entered the red zone. So, we may not be able to take much away in regards to Dunn’s play calling style, but it will definitely be interesting to watch as we move into next year.