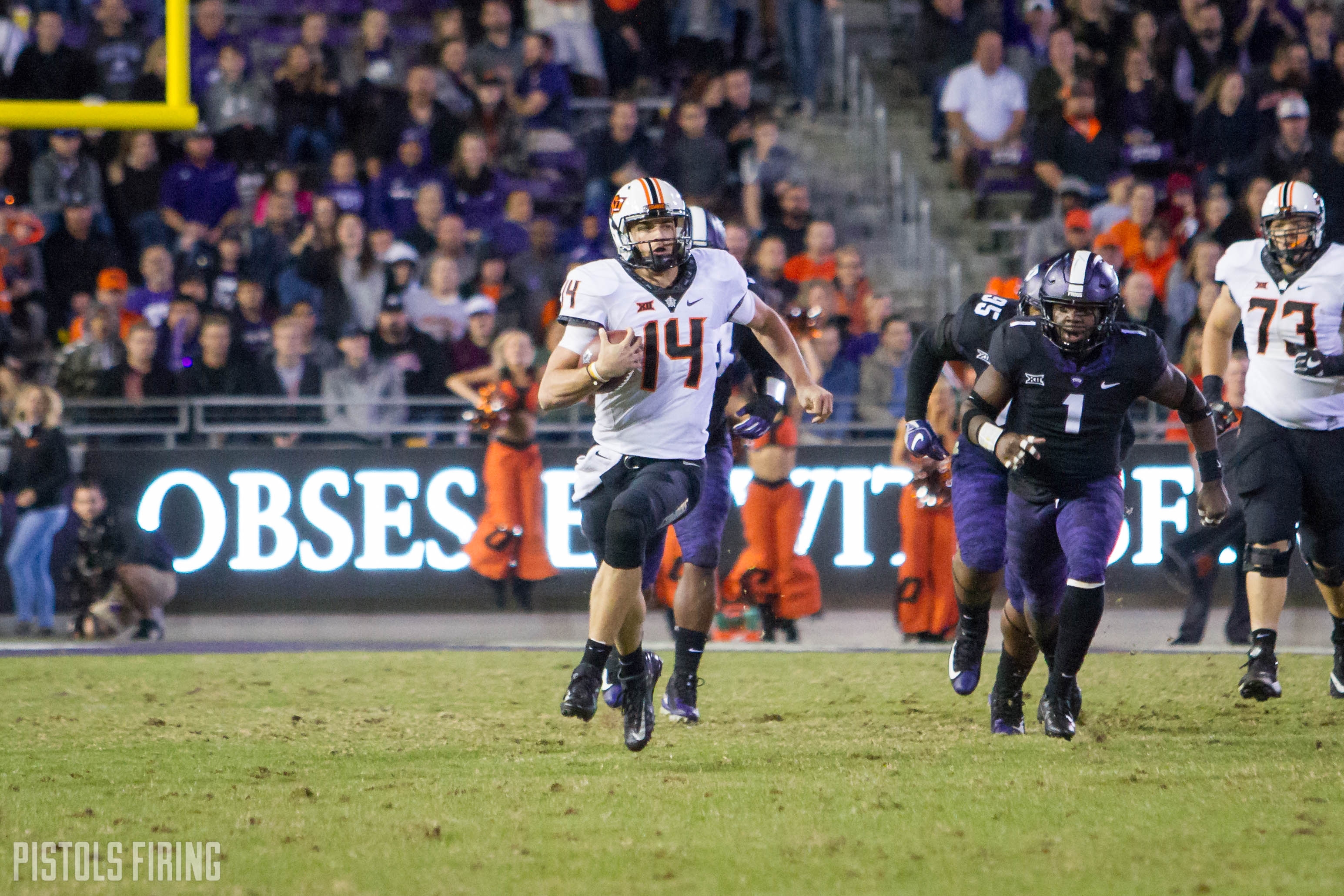 Oklahoma State’s regular season ended in familiar fashion on Saturday night, falling 31-24 on the road to TCU and finishing with a 6-6 regular season record for the fourth time during Mike Gundy’s tenure and with its worst Big 12 record (3-6) since the 14th-year head coach’s inaugural campaign in 2005.

To call this a roller coaster of a season would be an understatement. Tabbing this team as inconsistent is criminally positive. The only thing we have been able to count on from the 2018 Cowboys … is that we can’t count on them at all.

The highs have been high. Wins over ranked opponents in Boise State, Texas and West Virginia highlighted this apparent rebuilding year. OSU was one 2-point play away from taking a late lead in Bedlam.

But the lows have been even lower and more common. After besting Boise State in Week 3, the Cowboys were never able to string together consecutive wins again. In fact, after each of those three ranked wins, the Cowboys turned in a disappointing performance.

After Boise they were run off of their own field by Texas Tech. After beating Texas at Homecoming, they set a record for penalties and sloppy play in Waco. Now, after the West Virginia win, they looked downright unengaged for huge chunks of the game in Ft. Worth.

“As a coach, it was disappointing to watch,” said Mike Gundy after the game. “We waited until the fourth quarter to play on offense and make plays. It was essentially just a game full of mistakes for us, one right after the other.

“…The good news is that we get to play another game. I told the team that I would sure hate to finish the season like this.”

Mistakes have become commonplace for the Cowboys, even in some of their wins. On Saturday night it started on the Cowboys’ first possession.

After its defense recorded two sacks in two plays and then recovered a fumble, Taylor Cornelius and Co. started at the TCU 19-yard line with a perfect opportunity to score. Two passes late and Tyron Johnson was celebrating in the end zone. But a Tylan Wallace offensive pass interference penalty erased the score and OSU would settle for a field goal.

It was a pattern that would be repeated for a good chunk of the evening. A missed assignment here, a poorly-thrown pass there. Then you fall far enough behind that the heroic comeback is just a play late and touchdown short.

“It’s burning up inside,” said senior linebacker Justin Phillips. “I hate losing games, especially games that we are supposed to win. I just want to finish out the season well. It’s just another thing to learn from.”

The problem is that this team isn’t learning from these losses. That’s maybe the most damning part of it all. A team that is replacing as much leadership and experience from last year is supposed to have issues of focus and want to in Week 4 — or maybe it’s at least more understandable — but not in Week 13. That falls on coaches and players.

Kenneth Edison-McGruder was asked if a TCU team that was fighting to secure its own bowl eligibility was hungrier than OSU.

Chuba Hubbard was asked about playing with urgency with these slow starts, and he said something that was pretty telling, I think.

“I mean definitely not if you look at West Virginia when we were down 17-0 at half,” Hubbard said. “That is just something we have to address and take care of. We have to come out fast and finish strong.”

Bringing up the West Virginia games tells me that there was at least some feeling on this team that “Hey, we just beat the No. 7 team in the country last week,” that they took their opponent lightly, and that they really weren’t that motivated coming in. All of those are inexcusable.

I can infer all I want from what a freshman said, but we all actually saw it playing out before our eyes in much of the first half when the Cowboys had the ball.

In a season that has been defined by inconsistency, lack of discipline and focus and let downs, the TCU game served as a microcosm and the magnum opus for all of the Cowboys demons. Getting beat is one thing, beating yourself is another.

Let’s hope that the Cowboys can bring themselves to get up for whichever low-tier bowl game they land.