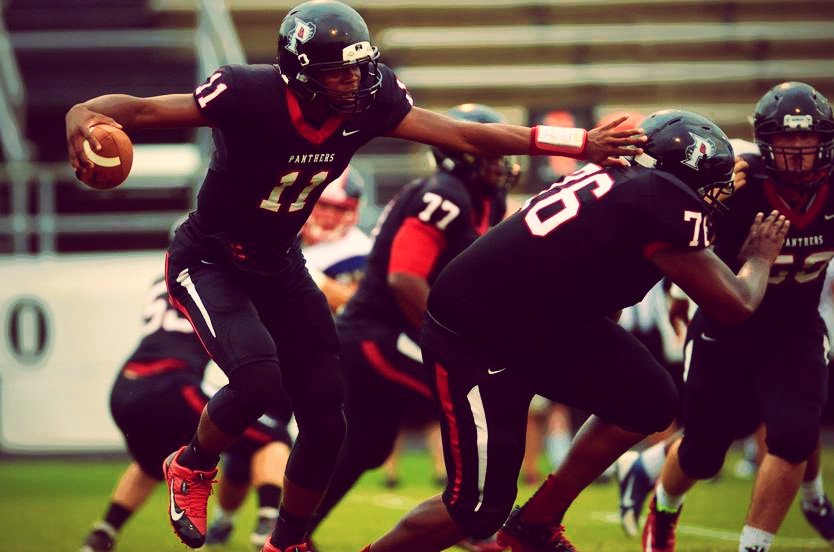 During his National Signing Day press conference, Mike Gundy gave us some insight into OSU’s quarterback competition of the future. Not the QB competition for the immediate future. There is none. But with the program stockpiling talented prospects to take over for Mason Rudolph next year, this year’s spring game should be all the more intriguing.

“It will be an interesting spring because Mason (Rudolph), we won’t work him a lot,” said Gundy. “We will work the younger guys. As we have our three or four thud scrimmages in the spring, the majority of them will be the young quarterbacks and we let them play.”

When talking about incoming freshman (and “big man”) Jelani Woods, Gundy seems to share our enthusiasm for his intangibles. And why not? At 6-foot-7 and 230 pounds, Woods stands literally head-and-shoulders above the pack.

“Yeah, he’s a big man,” said Gundy. “He is on campus now. He had a great year. I think they started out 2-3 and then they ran the table and won a state championship. We are excited about him. He’s in the program; lot of substance to him. Comes from a good mom and daddy.

“They understand commitment and the structure and discipline we look for. It will be really interesting how he develops.”

If I can read between the lines here, I’d surmise that Woods and his family are on board with his likely upcoming redshirt year, but that won’t keep him from showcasing his talents in the upcoming yearly exhibition game.

Given his frame and natural ability, I can’t wait to see what Woods come out looking like in 2018 — after essentially a year and a half in the Rob Glass’ program.

But Woods is not the only young QB I’m excited to see. All signs point to Keondre Wudtee being a baller. During fall camp of his redshirt year in 2016, Wudtee was already getting attention for his “quick release and strong arm.” And former OSU wide receiver Austin Hays talked about Wudtee’s feet.

“He’s obviously wearing a green jersey, so nobody can touch him,” Hays told the Oklahoman. “But you can just tell he’s very elusive and he’s got big moves.”

We would be remiss to skip over the Oil Baron, Taylor Cornelius who will be a redshirt junior next season and could be first in line as Mason Rudolph’s backup. He should get some snaps this spring as well as John Kolar, who will be entering his redshirt sophomore season this fall.

Tracin Wallace, brother of highly touted OSU receiver signee Tylan, is also listed as a quarterback. Whether he has completely recovered from last year’s knee injury in time for the spring game, he’ll be a player to watch in the future.

“We talked about Tylan and Tracin Wallace, who has played quarterback,” said Gundy. “He’s had the knee injury, but should be up and running in two months. We’ll get him in here and could do some things for us at the quarterback position. Obviously, he’ll probably redshirt with Mason being back. It will be interesting to see how he develops over the next couple of years.”

There are a lot of questions to be answered before Mason Rudolph’s successor is named in roughly a year and a half, and he may not even be on OSU’s roster right now. But on April 15, we’ll get our first look at a couple of the frontrunners.