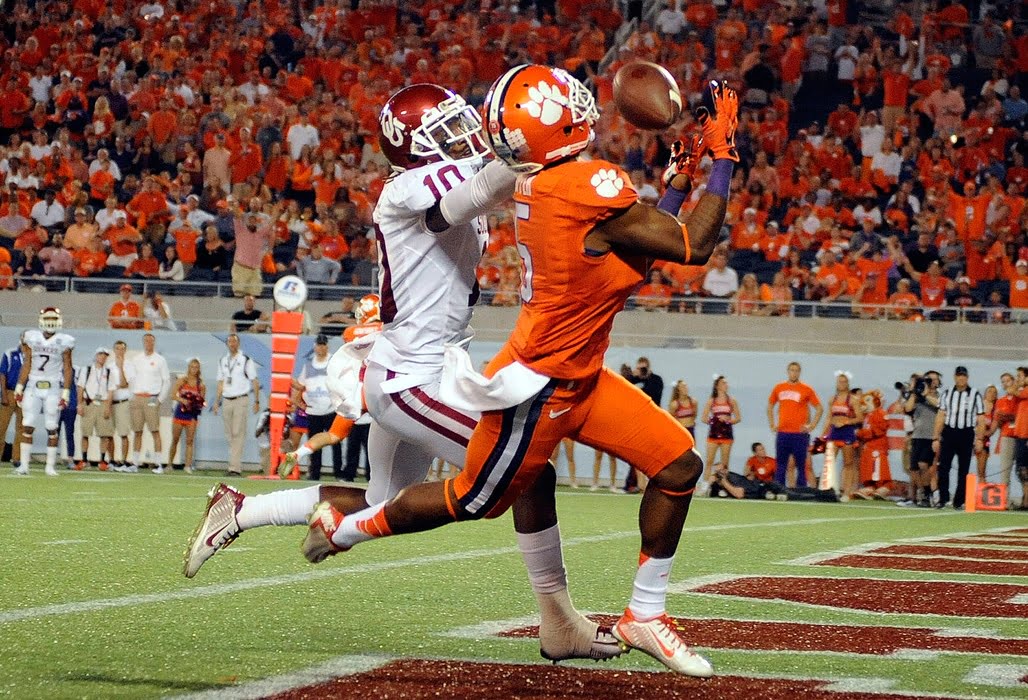 We haven’t enjoyed Clemson’s thrashing of OU enough, have we? (USATSI)

Little over a week has passed since OU’s disastrous appearance in the Russell Athletic Bowl, and the Sooners are still looking for answers.

After firing co-offensive coordinators Josh Heupel and Jay Norvell, fans and experts alike have wondered whether this change in staff will really solve what’s ailing the once dominant OU football program.

Though the offense needs work, the problem for OU seems to run deeper.

After announcing the staff changes, head coach Bob Stoops called a press conference on Wednesday to discuss this deeper problem with Sooner football. In this forum, Stoops revealed the ugly truth: OU is suffering from Chrysophobia.

“We’ve suspected for a while now,” said Stoops, “but we hadn’t had it confirmed. That’s why we called in Dr. Heinrich, an expert in phobia and fear diagnosis and treatment.”

Dr. Heinrich said he had begun forming his diagnosis the previous year (2013) following a 36-20 loss to Texas, but he hadn’t verified the condition until the final two games of the 2014 season.

“It’s tricky,” said Heinrich. “We didn’t want to cause further trauma by mislabeling the condition, but from my post Bedlam interviews, I was pretty sure. The signs were there.”

Heinrich said several players, whom he did not name, reported to him following Bedlam the Oklahoma State’s pants had been very unsettling for them.

“One player,” said Heinrich, “said, and I quote, ‘Those pants, man. I just… they were like a bunch of angry, giant carrots. I’d just get lost looking at them and miss a tackle. It was horrible.’”

Heinrich said his hopes had not been high when he heard that OU drew Clemson for their Bowl, but he had tried to stay optimistic.

Until he saw the uniforms.

“Once they took the field,” said Heinrich, “I knew it was over.”

Stoops noted that when Clemson stepped onto the field he saw several players break down and cry and one defensive back start eating grass to calm himself down.

“It was bad,” said Stoops. “At half-time, one guy asked me if he could swap places with the waterboy because it had always been his dream to waterboy a Bowl game. That’s where we’re at.”

One brave player, Trevor Knight, admitted that he had been badly affected by Clemson’s uniforms during the game.

“Every time I tried to throw or even thought about scrambling,” said Knight, “I just pictured this … ‘yellowish-red’ tidal wave rolling down the field. Man, it was truly terrifying. I mean, they couldn’t wear just a little more purple? Just a little?”

Heinrich said going forward they plan to remove all “yellowish-red” items from football facilities, especially a certain spherical fruit that can be peeled and broken into slices.

The football program is petitioning the entire campus to do the same and are even planning to meet with Norman city officials to ask them to switch out their traffic cones.

“We’ve compiled a brochure on the many wonderful colors of traffic cones aside from ‘yellowish-red,’” said Stoops. “We meet with them next week. We’re feeling optimistic.”

Heinrich noted that a trauma this deep and pervasive must be several years old, so it will take a while to treat.

“The initial event likely occurred sometime 2, probably 3 years ago, late in the year,” said Heinrich, “and hasn’t been dealt with up until now. We need to be careful we don’t allow further traumas or they may never fully recover.”

Despite the difficulty of the situation, Stoops says that there is reason for hope.

“I mean, we’re the Sooners,” said Stoops. “Besides, I’ve got everything under control. There’s absolutely no reason to panic. No reason at all.”