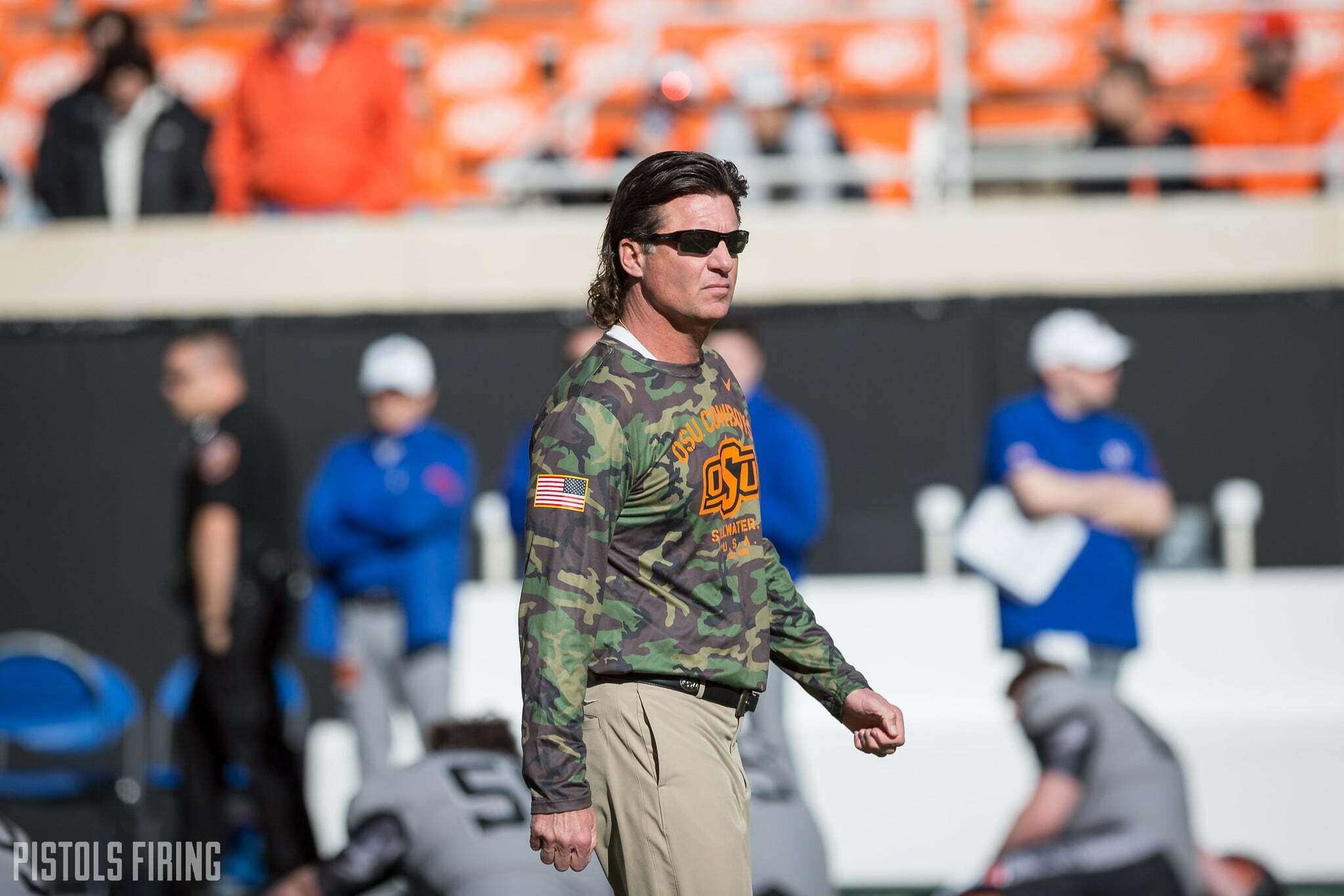 “This is going to be our Pearl Harbor moment, our 9/11 moment. Only, it’s not going to be localized, it’s going to be happening all over the country. And I want America to understand that. … This is going to be the hardest and the saddest week of most Americans’ lives, quite frankly.”  -Surgeon General Jerome Adams on April 5, 2020

Mike Gundy has always been a pull-yourself-up-by-the-bootstraps kind of guy. That’s to be expected from somebody who rose from high school hero to the highest-paid human in the same state where he learned to walk and talk. He’s not one to mope after losses or sulk after bad plays. He’s level-headed, calm and presses his organization forward in so many of the right ways.

His genius (which often comes off as luck given his fashion, grooming and hobby choices) is building an organization that runs itself. This takes sticktuitiveness, thoughtfulness and optimism. The kind of leader people want to follow.

It is what has led to 14 straight bowl games, a Big 12 title and a comfortable position as the second-best team in a Power 5 conference for most of the last decade. It has led to wealth beyond his simpleton farming needs and power that he mostly exercises in good and right ways.

On Tuesday, in a sprawling conference call that we did not participate in, Gundy — who has been mostly silent over the last three weeks of coronavirus pandemic chatter, opting instead to take a trip with his family to the mountains of Montana — stepped into the fray and said all the wrong things at exactly the wrong time. Even worse, he said them with the same machismo that courses through the sport that has made him and his entire aura quite famous.

On a day when it is expected that close to 2,000 American souls could pass because of this pandemic (just less than the number that died in Pearl Harbor), Gundy bloviated about the importance of college football. Though his intent may have come from a proper place, his delivery was an absolute disaster. His inability to look around and read the room, then hit any of the right notes (or come within striking distance of them really) is as tone-deaf as it gets.

“This goes back to the NCAA, the Presidents of the universities, the conference commissioners, the athletic directors all need to be meeting right now and we need to start coming up with answers. In my opinion, if have to bring our players back, test them. They’re in good shape, they’re all 18, 19, 20, 21, 22 years old and healthy. A lot of them can fight it off with their natural body, their antibodies and build-up they have … those that are asymptomatic. If that’s true, then we sequester them. And people say that that’s crazy, no it’s not crazy, because we need to continue to budget and run money through the state of Oklahoma.”

Whoooo boy, what a quote. What a week to drop that quote, too. The Pearl Harbor and 9/11 of this pandemic — the most crucial week of the most important event of any of our adult lives — and you’re out here talking about propping up teenagers so the coffers won’t be empty. The bigger problem here is that I honestly don’t know if given a do-over whether he’d say anything different.

That wasn’t all either.

Congrats on mastering Zoom, but that’s not what OSU deputy athletic director Chad Weiberg told me on our podcast last week.

“It’s part of a bigger picture,” said Weiberg. “The real decision in that regard is going to be made obviously at the advice of experts and what’s going on at the time. Then it will come down to university leadership — president Hargis, his leadership team on what’s going on on campus. Are we opening campus back up? Are we having classes? That will be the biggest decision-maker. It’s going to be difficult to have a football season if the university is closed.”

The difference here is striking. Weiberg spoke with humility, answering questions he could answer and deferring where it was appropriate. Gundy? He talked about blood transplants and how antibodies work.

“We get people that get the flu during the season, we quarantine them, we treat them, we make sure they’re healthy, we bring ’em back,” Gundy said. “It would be the same thing here, but at some point, we’ve got to go back to work. We’ve got to get these guys back in here. … From what I read, the healthy people can fight this, the antibodies make it better.”

From what I read is never a good place to operate from when you’re in the handful of the most powerful people in the state. From what I read is best left for mesh routes and trick plays, not the message from on high for a state that has lacked the leadership it has badly needed.

“They’re doing some blood transplants now with the people that have already gotten the disease, that have gotten over it that have the antibodies that can fight it. There’s a lot of people who can figure this out.”

Nope. You don’t get to be a doctor and an administrator and a football coach just because you went 10-3 a couple of times.

“May 1’s our goal. Don’t know if it will happen. Players will come in after that. Maybe they don’t come back, but the majority of people in this building who are healthy … and certainly the 18-, 19-, 20-, 21-, 22-year-olds that are healthy, the so-called medical people saying the herd of healthy people that have the antibodies may be built up and can fight this? We all need to go back to work.

“I’m not taking away from the danger of people getting sick,” he said. “You have the virus, stay healthy, try to do what we can to help people that are sick. And we’re losing lives, which is just terrible. The second part of it is that we still have to schedule and continue to move forward as life goes on and help those people.”

Gundy speaks often about his players staying in their world. He got so far out of his on Tuesday not even Elon Musk could bring him back.

“Let’s just say the medical community says we just don’t want 20,000 students here and we don’t want them crammed in classrooms for whatever reason,” Gundy said. “Okay, we go online distance learning. We need tuition money, we need the fee money that feeds the economy in Stillwater and Payne County and the state of Oklahoma. I don’t want people to say we can’t go to school and teach distant learning because we can. We’re doing it right now.

“Let’s not hamper ourselves and say that we have to be in school here. I’m not also saying that I’m taking away from the general student population. What I’m doing is trying to find answers and come up with solutions based on the situation that we’re in right now.”

Again, there is a time and a place for this impassioned speech — I’m not opposed to that at some point in time — but boy was today and this week not it.

Power is a tricky thing. Its less attractive cousin is isolation, and when there’s nobody around to tell you no or you refuse to listen regardless, you start veering off course in a way that both makes you and the university you represent look bad. Touting wildly extreme news networks (One American News Network, in this case) and unloading on the “Chinese virus,” are two examples, both of which Gundy touched on in his conference call.

Regardless of your political views or what you believe about any of this, if you are unable to strike a tone that is worthy of the position that you’re in and the power you hold, then you deserve to be eviscerated for it.

Which is exactly what has happened.

It’s been a bad day for Gundy in the media world, not that he cares. It’s also not been a great day for him with a large swath of Oklahoma State fans. As for players, one writer texted me and said: I have to think some of his players are going to read his quotes today and wonder what he’s prioritizing here. It’s not a good week for that to happen either.

In the end, all of this is incredibly embarrassing. When power leads to a worldview that is so out of touch with reality that not even your staunchest defenders have a leg to stand on, the cost of attaining that power comes fully into focus.

And there’s always a cost.

As one source noted to me a month or so ago, Gundy was so good and so amicable and so locked in to the people around him for most of his career. The last few years? Not so much.

I have seen firsthand the effects of this power — although that’s another story for another time — and it brings out the worst in us as humans. An inability to empathize. An inability to step into somebody else’s shoes and see things the way they see them. A myopic position that, even when you try, you cannot bend toward reality. This is what happens when every answer around you is yes.

They’re in good shape, they’re all 18, 19, 20, 21, 22 years old and healthy. A lot of them can fight it off with their natural body, their antibodies and build-up they have … those that are asymptomatic. If that’s true, then we sequester them. And people say that that’s crazy, no it’s not crazy, because we need to continue to budget and run money through the state of Oklahoma.

Where are we at in society?

Power is a revealing thing. When the chips are down — the real chips, not the fake plastic ones we’re normally playing with — we simply become more of who we are. Maya Angelou, right? When people show you who they are, believe them. There are many people about whom that could be stated in these days. Maybe Gundy most of all in the circles in which we run.

Even if the football is played in September and October and November, it won’t change anything about today, the day Gundy put his “this is who I am” stake in the ground. He bemoaned not having a stadium full of folks this fall in Stillwater, USA chanting his name and laughing at his antics.

In lieu of that — if we get football at all — we will likely get empty stadiums and silent arenas. I used to think that was a huge bummer — what is sports without the theater? Now, after what was said today, I think for Mike Gundy, not having anybody at the games to root him on might be the most fitting thing of all.