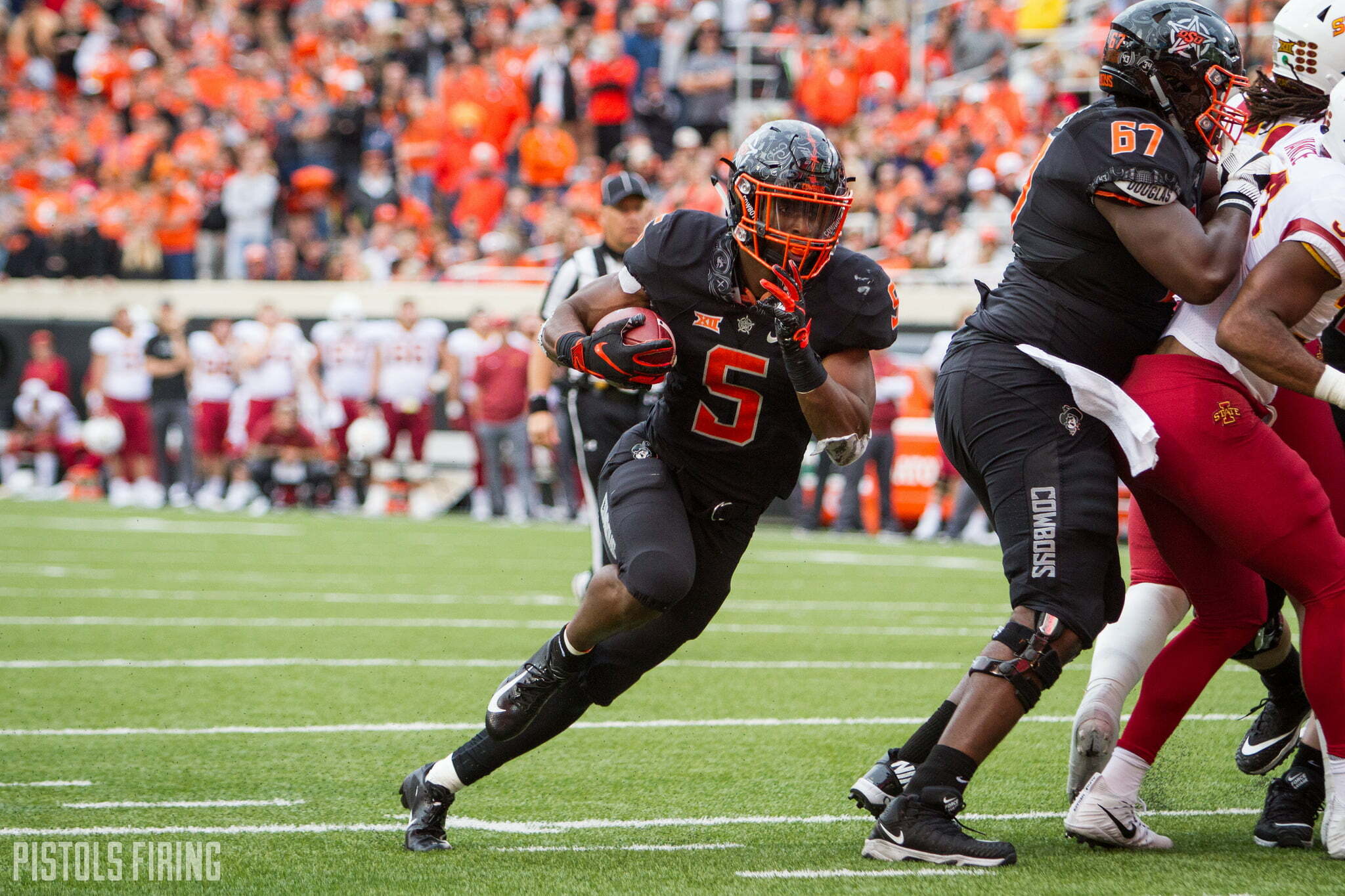 The NFL Draft is just a couple of weeks away so let’s take a look at a few of OSU’s draft-eligible departures, where they are projected to land and how they are viewed nationally as prospects.

As for Hill, who tested extremely well and seemed to raise his draft stock at the recent NFL Scouting Combine…

“He showed explosiveness at Oklahoma State with the pads on,” Kiper said. “He’s 5-9, under 200 pounds. But with a 4.4 (40-yard dash) with a 40-inch vertical, he gives you the kind of explosiveness that people want.

“Tomorrow I’ll have the top 10 running backs. He’ll be in that group. That puts him in the third- to fifth-round discussion. He’ll be one of the more explosive backs in this draft. Late day two (when the second and third rounds take place) or early day three (fourth through seventh).” [Tulsa World]

In Kiper’s latest three-round mock, he has Justice going to the Ravens with the No. 102 overall pick.

Chris Trapasso of CBS Sports recently took at look at this year’s crop of running backs and made pro comparisons for each, and he likened Justice to the former Heisman* winner.

Hill ran 4.40 in the 40 and jumped 40 inches at the combine. He’s part of a tiny fraternity at the position that’s accomplished such a feat. While he may not have the best vision — and tends to bounce things outside — Hill is a super-fluid home-run hitter with impeccable contact balance who flourishes in space. Sounds a lot like Bush to me. The team that drafts Hill needs to get him involved in the screen game right away — like Bush was as a rookie, when he caught 88 passes for 742 yards and had four receiving scores. [CBS Sports]

Not bad company to keep.

Justice Meets with the Eagles

The visits are not exactly public knowledge but in the world we live in (in my best Gundy impersonation), it’s hard to keep many things secret, especially during #DraftSZN. Bleeding Green Nation, an Eagles fan blog, originally reported that Justice Hill “seemingly” met with the Philadelphia Eagles on Wednesday based upon the all-Big 12 rusher’s one Instagram story.

But that visit was later confirmed by multiple media outlets.

Philadelphia would provide an interesting landing spot for Justice because I think he would fit well with the offense the Eagles run. They did just trade for Jordan Howard from Chicago and have a slew of backs on the roster, but it appears they may still be looking to add depth to their backfield via the draft. Justice could provide a value pickup for the Philly if he were still available at either fourth round pick (127 or 138).

According to NFL insider Ian Rapoport, Brailford met with the Steelers earlier this month.

It’s possible that Brailford makes it a trio of former Cowboys at Pittsburgh. The projected mid- to late-round pick could add value to a young, rebuilding Steelers defense.

One-year starter Taylor Cornelius was bound to get at least some pub this close to the draft. At 6-6 and 230 pounds, his measurables are enticing, but his stats demand a second look by draft evaluators and hopeful NFL fans alike.

SB Nation site Cincy Jungle listed Cornelius as a sleeper draft pick for the Bengals. The post did point out his sub-60 percent completion percentage and bemoaned OSU’s “non-NFL” system, but gawked at his impressive numbers.

Still, the kid can sling it, as evidenced by his 3,978 passing yards and 32 touchdowns. If on a team with a lot of weapons (which is usually the case at Oklahoma State) and pressed into action, he may surprise some people. [Cincy Jungle]

It’s possible that a team takes a flyer on Cornelius with a late round pick based solely on his upside. It’s more likely that he gets picked up as an undrafted free agent, but he would get a chance to prove himself during some team’s training camp.

#OklahomaState RB Justice Hill ran ahead of #Seahawks starter Chris Carson as a true freshman & posted the No. 2 SPARQ score among RBs at this year's Combine, including a 4.4-flat forty.

Ok State EDGE Jordan Brailford with some nifty hand usage to swipe and rip as he's bending the corner for the sack pic.twitter.com/5smIT9TqJi