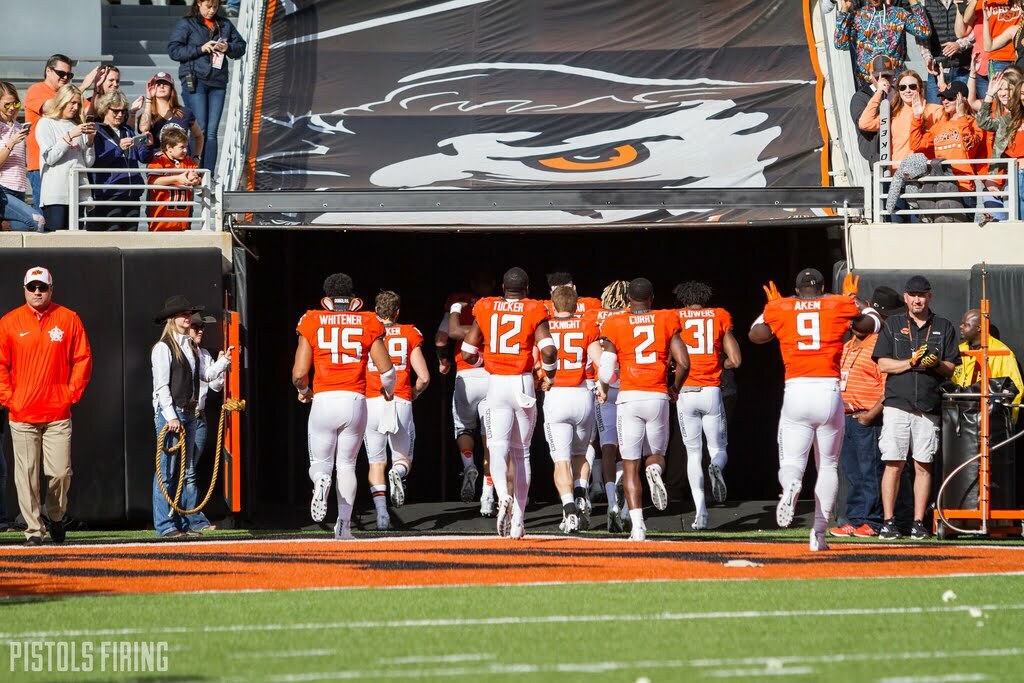 It’s not too late to lay out our season predictions for Oklahoma State ahead of its Thursday opener, so the PFB team is going on record with predictions for how we think this season will play out.

We’ll put out our more generalized college football #takes on Thursday, but for now, feast on our offensive and defensive MVP’s, bowl game predictions and more.

Porter: Justice Hill — I tried to talk myself into a hipster pick like Tyron Johnson or Dru Brown, but this one is pretty obvious.

Boone: Justice Hill — and you better believe I am selling tickets for the Hei5man campaign. Train takes off Thursday at 7p.

Cox: Justice Hill. I realize that QB is the “most valuable” position on the field and that there is quality depth behind him but Justice Hill is my MVP. It goes back to your definition of the award. If the NBA can’t fix it, then who am I to try. Only one player screams MVP on OSU’s offense and it’s No. 5.

Marshall: Justice Hill – It’s Justice’s time to shine without Mason Rudolph. OSU is going to need his production now more than ever even if Gundy wants to cut his carries.

Ragusa: Justice Hill – Even though Gundy has said he’s like to limit Hill to 15 touches per game, I just don’t think it will be possible to keep the ball out of his hands. He rushed for over 1,000 yards in both his freshman and sophomore seasons, and I expect him to do it again this year. Without a Mason Rudolph or James Washington to compete with, I think he’s the clear cut favorite for Offensive MVP this season… he might even be with those two on the roster.

Grant: Justice. While I see the possibility of No. 5 attracting enough attention that someone else could spring up, there is not another star like Hill.

Porter: Calvin Bundage — He looked like he was going to start at safety for the Raiders when I saw him at Stillwater Media Days. Fully subscribed.

Boone: Justin Phillips. He’s the heart and soul of the OSU defense, and his high-level production will be of utmost importance for the new 4-2-5 to work effectively.

Cox: Calvin Bundage. Again, I’m going with the best player or the one I will leave a game thinking is the best. Bundage has bulked up and will go from a safety playing linebacker to a linebacker playing linebacker. If another year of experience can curtail his mistimed blitzes — and there should be plenty of blitzes — Bundage has all-conference and big-play potential.

Marshall:  Justin Phillips – Phillips will be the rock at the center of this new defense. He’ll probably lead OSU in tackles and cause a few turnovers.

Ragusa: Jordan Brailford – Brailford, both a 2017 All-Big 12 and 2018 preseason All-Big 12 selection, ranked second on the team in both sacks (5) and tackles for loss (11) a year ago. I expect both of those totals to increase in 2018 with the amount of blitzing and overall aggressiveness expected from Jim Knowles’ defense. If this happens, there’s almost no way you would be able to give the Defensive MVP to anyone else on this roster.

Grant: Bundage. In the new scheme, the most aggressive should be let loose. Calvin fits that.

Yards and TDs for Justice Hill

Porter: 1,400 yards | 13 TDs — I do think other RBs will shoulder a little bit more of the load and vulture some of his scores.

Yards and TDs for Taylor Cornelius

Boone: 4,000 yards and 29 TDs. I’m kinda of the belief that Cornelius might be usurped by Dru Brown midseason, but if he retains his job, I think he’ll do numbers.

Porter: Stoner at 1,000 yards | 7 TDs — I don’t feel great about him posting this many yards, but I don’t really think anyone else will either.

Porter:  LD Brown — Chubs will get some run here, but LD is probably the correct answer. I’ll say he goes for 350 yards.

Boone: Don’t ask me to be rational when Dillon Stoner is an option. Of course I’m picking Stoner. And I can’t wait until he finishes runner-up in the Heisman voting as a return man in 2018, second behind Justice Hill. It’s going to be great.

Marshall: Dillon Stoner – The fun pick here is Chuba, but I think Stoner will have more attempts than anyone else leading to more yardage. We’ve generally put incredibly high expectations on Chuba, so this is me trying to calm that down. I’m trying my hardest to not say Chuba. I really want to say Chuba. Chuba is fast.

Ragusa: LD Brown – Even with the new kickoff rule, I think LD had a solid season in terms of return yards. I have a feeling he’s going to break a few long ones and maybe even take one all the way.

Freshman of the year

Boone: Jarrick Bernard. Already in the 2-deep at safety, going to be a problem in the back half of the defense for years to come. He’s turned heads in camp.

Cox: I’m going to go with Lamarcus Morton, the redshirt freshman who is in the two-deep behind Rodarius Williams, mainly because I think he will play a lot.

Marshall: Tanner McCalister – I’m not really sure other than I probably heard his name more than any other freshman in camp.

Ragusa: Tanner McCalister – There has been a lot of talk about McAlister coming out of fall camp. Hearing the news that A.J. Green has been banged up and Rodarius Williams has been held out of some practices for precautionary reasons, makes me think there’s a possibility McAlister gets a lot of action early in the season. With him getting this game experience early, I think the coaches will trust him heading into Big 12 play, and I think this guy has the talent to make some big plays throughout the season.

Cox: Justin Phillips. He will be the first non-DB to lead the Cowboys in tackles since Caleb Lavey. After moving from Will to Mike backer in place of Chad Whitener, Phillips will be all over the place and has a little more playmaking upside than his predecessor.

Marshall: Justin Phillips – He’s the leading returner from last season, and he’ll be on the strong side this season.

Ragusa: Justin Phillips – Phillips was third on the team in total tackles in 2017 behind Tre Flowers and Chad Whitener. Both of those two are gone, and he’ll have some competition from Calvin Bundage and the safeties, but I think it’s Phillips at the end of the year who claims the tackle title.

Grant: Justin Phillips – the linebackers will be freed up to make plays with this new scheme

Marshall: Jordan Brailford – Brailford will probably get a lot of offensive coordinators attention, given he led OSU in sacks last year among returning Cowboys, but I think he’s going to have a spectacular season.

Ragusa: Jordan Brailford – I covered this in my defensive MVP section, but Brailford was second on the team last year, and I think he improves this year.

Boone: It will probably be A.J. Green but I’m going with a youngster in Malcolm Rodriguez. Has a nose for the ball that’s drawn rave reviews in camp, and a Ramon-like knack for making plays in big spots.

Cox: A.J. Green will up his team-leading four INTs to six, just because I want that to happen. Three of those will come from Will Grier.

Marshall: A.J. Green – Did anybody not pick A.J. Green?

Ragusa: A.J. Green – Green led the team last year with 4, and I think with the increased amount of man coverage you will see in Knowles’ defense, he will get even more opportunities to make plays on the ball.

Surprise of the Year

Porter: LD Brown is more productive than Chubs. The Canadian speedster gets all the pageviews, but I’m not convinced they’ll figure out where to use him or how he fits in. Also, should maybe be a little telling that LD, not Chuba, is returning kicks.

Boone: J.D. King goes for 200+ in Bedlam. It’s still early, but as a freshman, he only had one game — against WVU — when he surpassed the 100 yard mark in a single game. And it was 142 on 36 touches. I can see OSU just grounding OU to a pulp on the ground in Bedlam the same way it did against WVU, using Hill and King as a thunder-lightning duo that nets something like 50 carries in the in-state rivalry game.

Cox: My surprise of the year is that Taylor Cornelius will start all 13 games. I know that’s not super compelling but it would probably surprise most who originally envisioned a Spencer Sanders Newcomer of the Year or Baker-Lite planting the flag in Norman. Both Sanders and Brown keep their redshirts tucked in and duke it out for QB1 next spring.

Marshall: I think Landon Wolf, a redshirt sophomore who just got put on scholarship, will have more than 20 catches. Cornelius speaks highly of him.

Ragusa: To build off my interception leader, I think A.J. Green has a shot to be First Team All-Big 12 when it’s all said and done. I go into more detail here, but I am really high on Green and love the way he fits into Knowles’ scheme.

Boone: I’m on record saying I think OSU opens the season 9-0. If that ends up happening, A) All hell will break loose and B) OSU will probably find its way into the top 10 with some wiggle room. My guess is No. 7 is as high as they get.

Cox: I think the Cowboys climb into the top 15, let’s say 12, after going 6-0 to start the season. Then November happens.

Marshall: No. 11 – I’ve got the Cowboys starting 6-0 before they go to Kansas State and lose a game they shouldn’t.

Marshall: 6-3, fourth after a head-to-head loss against TCU

What bowl OSU will play in (and against who?)

Boone: Give me Ole Miss-Oklahoma State in the Camping World Bowl.

Cox: I’ll go with one I’ve seen thrown around. The mullet downs Jimbo as OSU beats a (once again) overrated Texas A&M team in the Texas Bowl.