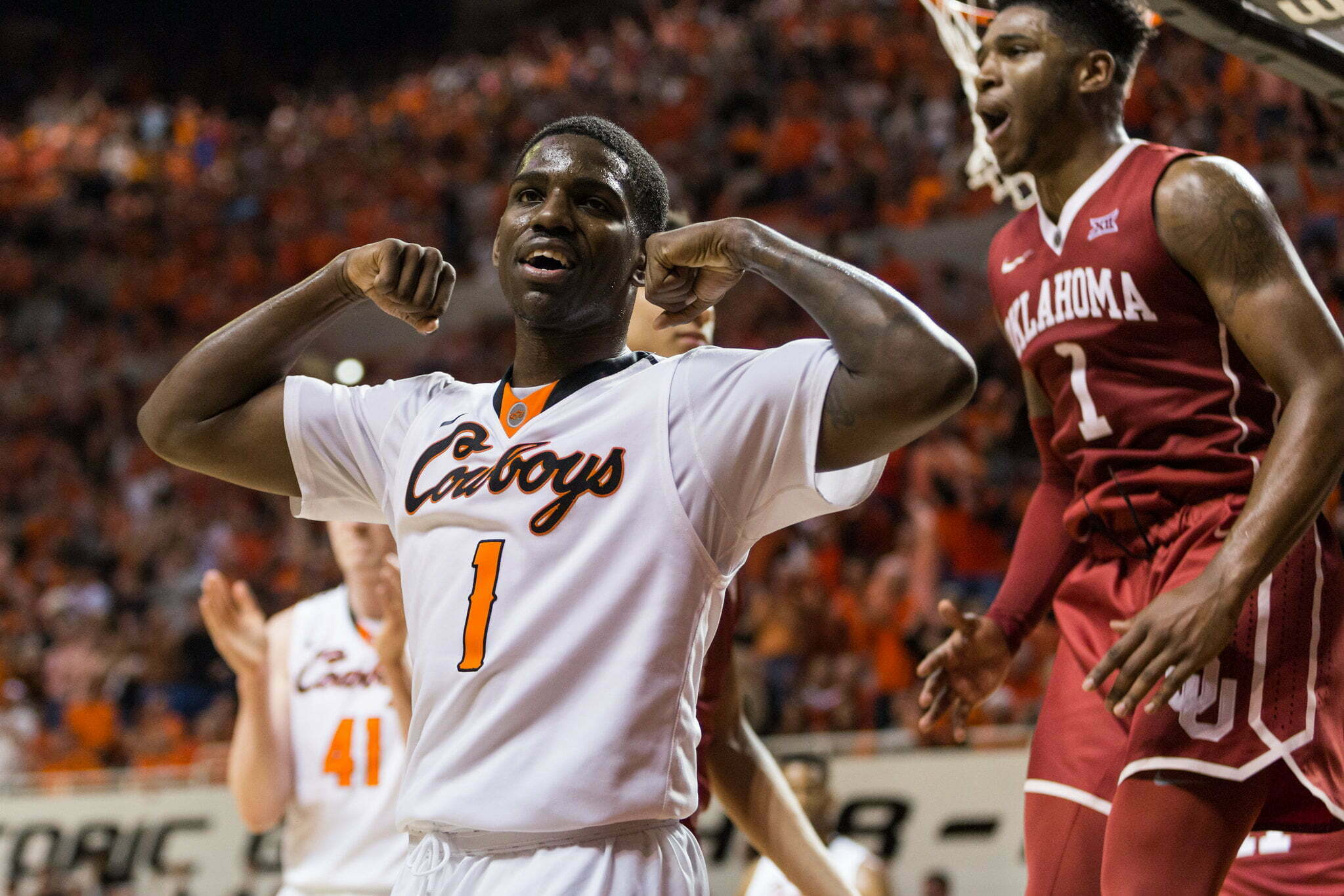 Maybe it was the countless hours we’ve all spent pacing our homes in quarantine over the last couple of weeks — or the fact that we all feel very strongly about our personal favorite all-time OSU hoopers — but this edition of the Pistols Firing Roundtable was one of the most cutthroat to date.

The idea is not our own, but it’s a good one. Come up with a starting five of OSU ballplayers, each in his “vintage” year. We limited ourselves to players from the Eddie Sutton era and onward (with the stipulation that four of us had to settle on just five).

Kyle Porter: Here’s what I think we should do.

Parameters: Sutton onward. We try and put together the best team possible by throwing out a player and a year. So 1995 Country is a lot different than 1993 Country.

So we start at PG, settle on one and move forward from there.

Kyle Boone: OSU’s offense was No. 1 at KenPom with Jawun. That seems like centuries ago.

Scott: I’m just really passionate about how good Jawun was.

Kyle Cox: I love Jawun. His game was so smooth. That being said, I think I have to go with John Lucas the Tre. Maybe I’m just sentimental.

Scott: What year so I can provide evidence as to why you’re wrong.

Scott: He had 135 assists that season and pros all around him. Evans did more with less.

Cox: Actually, never mind. Why did I skip Doug? Discussion over.

Cox: And that’s Doug in any of his three years at OSU.

You don’t have to mention Doug’s scoring @boone. He will have four alphas to dime up all day.

Boone: Your only valid Doug argument — and I do think it’s reasonable — is that his playmaking was insanely invaluable.

But he also shot 18.4% from 3. Russell Westbrook is even laughing at that.

Scott: I think Jawun was the best pick-and-roll point guard in school history. Are we putting Marcus with SG because it’s going to be disrespectful if we don’t even mention him?

Cox: You’re gonna need someone who can set up all these scorers and run the offense. Otherwise we’ll just have an all-star game.

Scott: But just imagine Jawun setting up some of the people that will be on this team and being able to score.

Cox: Doug will never take a 3. He might hurt you at the charity stripe though.

Scott: Jawun will d-up whoever he is guarding and not hurt you anywhere

Boone: Yeah, I think we gotta throw Doug out. Remeber: Jawun was a pretty tenacious defender, too. Everything he brought to the table was superior to Doug IMO outside the passing.

Boone: We need a Doug ruling from the boss.

Porter: It’s so tough. Doug is such a zero scoring-wise in a way that matters more now than it did in 2000.

Cox: I gladly will drift off on my #olds ice floe for Doug if it gets us moving.

Porter: Haha! You hate to see how little respect 2001 Mo Baker is getting!

Scott: Jawun was a point away from taking a team to the Round of 32 by himself.

Porter: Not to mention Andre Owens.

Cox: I know. I had others to throw out but I felt I was getting outnumbered.

Porter: If Doug is our PG, let’s get the 2-guard convo going.

Cox: Adrian Peterson. I have notes.

Scott: Wait how did this turn so quickly.

Boone: I’ll agree to Doug but he can only take a max of 2 shots per game.

Scott: I’m the maddest I’ve ever been, but fine.

Cox: 1999 Pete was the best all-around scorer I’ve ever seen at OSU.

Give him the ball. Get out the way. He can drive. He can knock down the 3. He can also defend. (My heart has taken the wheel.)

Scott: This is a pooh take. 1995 Randy Rutherford.

Porter: We can come back to Doug-Jawun depending on how the rest of it goes.

Cox: Randy was the best shooter. Pete was the better scorer/all-around player.

Scott: Rutherford scored 726 points the same year Big Country scored 797. That’s the No. 1 and No. 4 scoring seasons in program history in the same season.

Boone: The olds swear by Rutherford. So therefore I stand by the olds.

Porter: This starts to get problematic in a hurry because we run into a James Anderson-Desmond Mason-Marcus Smart-Rutherford-Peterson issue.

Scott: If we’re going all-around player at this spot, it’s gotta be Marcus.

Porter: You only get, what, three of those?

Cox: It is tough. But my 13-year-old self would be shaking his fist if I didn’t vote Adrian Peterson. My walls were decorated with at least four homemade posters that probably cost my dad half an ink cartridge each.

Scott: And while Phil Forte III isn’t going to get in with that stacked in front of him, he deserves an honorable mention.

Scott: Are we picking five guys? Do we have a bench?

Scott: Cox I’m going to drive down to OKC and run over your mailbox.

Boone: So where are we leaning then at SG? I think my vote is still up for the taking.

Boone: I think TA should be our wing.

Scott: I think he has to be the SF.

Porter: I do too.

But capitalize the D.

Scott: Which is why we need 3-point Rutherford at the SG.

Cox: So Desmond Mason can be the 4, then?

Porter: So that would be …

Scott: Until I argue for Jawun later, sure.

Porter: Can Tony play the 4?

I think he can.

Cox: He could in college.

Porter: Then you have a Byron Houston-Big Country problem. Man.

Cox: So… this should have been an Eddie Era RT

Which is still hard.

Cox: I would hunt down Marsh’s mailbox.

I looove Jawun, by the way.

So let’s go Jawun. My peace offering. Someone back me up with AP.

Porter: How do we feel about this?

I rest my case, and I’m not budging on Peterson.

Porter: Peterson can’t be on the team. He can’t beat out TA or James or Marcus. All Big 12 POYs.

I love Pete, but he can’t hang with that group.

Scott: I need someone to space the floor in that group.

Cox: I disagree with you, KP.

Cox: So my next blog post will be entitle Pete Island — Population: 1, and it might be 1,500 words long.

Scott: I think I’m taking out James Anderson from that group and putting in 1995 Rutherford.

Porter: I love this. This is what’s supposed to happen! Anger! Frustration! Vintage snobbery!

Boone: Keeping James Anderson for sure.

Scott: Defense can all just sit in the lane.

Porter: That’s all Rutherford did anyway.

Cox: I’m not balking at Randy, but my dad put a lot of $$ in that printer for a reason.

Boone: I was with you on the Jawun thing, but you’ve fallen off your la-z-boiiii.

Scott: James was a decent 3-point shooter, but you could zone that team up and watch them miss 3s.

Cox: But we’re putting him on this team.

Boone: Your blind spot is that you’ve always placed too much value on white men who can shoot the 3.

Scott: Where is the 3-point line in this scenario?

Porter: It’s a good question. I say just where it is now. I agree that there’s not enough shooting, but I don’t know if I agree enough that I’m taking 2010 James Anderson off the squad.

Boone: Shooters are great until they get attacked defensively and can’t stay on the court the entire game.

Boone: Why don’t we just say screw it and play TA at the 5?

He has to be on the team.

Scott: I’ll be that assistant on the bench looking at Rutherford shrugging my shoulders when the team starts 0-for-8 from deep.

Scott: Boone you’re worried about Rutherford not being able to hold up defensively on a team that has Marcus and TA on it.

Porter: I feel like we are actually further away from our starting five than when we started.

Scott: I didn’t realize I would be as passionate about this as I am.

Boone: It just takes one weak link defensively, Marshall. It’s like you in the media pick-up game. People just attacking you in pick and roll!

But still after AFH

I listened to the man explain to me why he is the best shooter in program history, I did research and turns out he’s right.

Cox: So I like the team so far, but I think it might lose two out of three to …

We are further away.

Porter: I agree. Jawun is now a lock for me.

Cox: My team will take on the PFB team… and win.

Scott: TA would be guarding Peterson at the urinal.

Scott: Porter this is your chance to get Cam McGriff as the fifth-best player on a team.

Porter: My only chance.

Boone: He’s a lock. We just gotta figure out the position. He can play 2-4.

Cox: He should be.

Boone: I agree. Country is a lock at C.

Scott: Now we get back to arguing.

Cox: I have a hard time with no D. Mase.

Boone: He can be our sixth man. There’s no room!

Scott: I think I also vote for that.

Cox: Oh, alright. (Would actually make me giddy to see.)

Porter: No shooting but fine. TA + Marcus would allow 0.8 PPG to their opponents.

Scott: Which is why we need Rutherford!

Boone: So who is our fifth? Picking between James or Byron?

Porter: If we take Rutherford over 1991 Byron Houston then this whole exercise is an embarrassment. This is why you should go James over Marcus.

Cox: I misunderstood the earlier Q. I vote Randy over Smart.

Boone: This is a bad look, but I’m going against myself and in agreement now that this has settled. Marcus is off.

Porter: Taking Rutherford over Byron is like Marshall saying he’d rather have Dizzy than Cade next year. Which he probably would.

Scott: That an option?

Porter: Is that our squad?

Scott: I’m still shrugging at Rutherford on the bench, but sure.

Wait Marcus and Rutherford got booted off? I’m mad again.

Porter: Marshall is going to roll out a team that looks like this and think he’s going to take our squad …

Boone: Marcus would take too many wild shots, anyhow. Then him and TA would inevitably get into an on-court beef somehow.

Scott: Have y’all seen this team called the Golden State Warriors that broke the modern NBA?

I’m open to replacing somebody with Marcus but I’m not taking any Rutherford votes. State your final case, Marsh.

Scott: For Marcus? I just think he’s a top-5 player in program history and leaving him off the team is disrespectful.

Porter: I don’t love it but I’m open depending on what @boone and @cox say.

Porter: I do think this team gives our team problems…

Scott: You’re telling me someone walks up to you and says, “Hey, you want Marcus Smart or James Anderson” and you’re taking James? Nostalgia is corrupting the decision making process.

Your recency bias is crippling you.

Porter: The problem is that if Marcus replaces James, our best shooter (by far) is Jawun. That’s not ideal. James might have to stay.

I guess TA can shoot it a little.

Scott: Which is why it should be Jawun, Marcus, Randy.

Porter: That was fun as hell.

Scott: Fine, it’s totally fine. When this hits the public, the people will back me up.

Boone: Basketball is so hard because the eras are so hard to evaluate. It’s great.

Boone: I watched hoops from a decade ago and it felt like the stone age 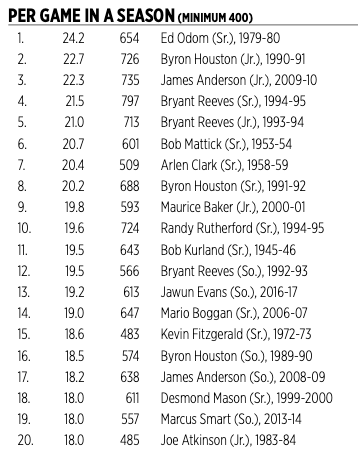