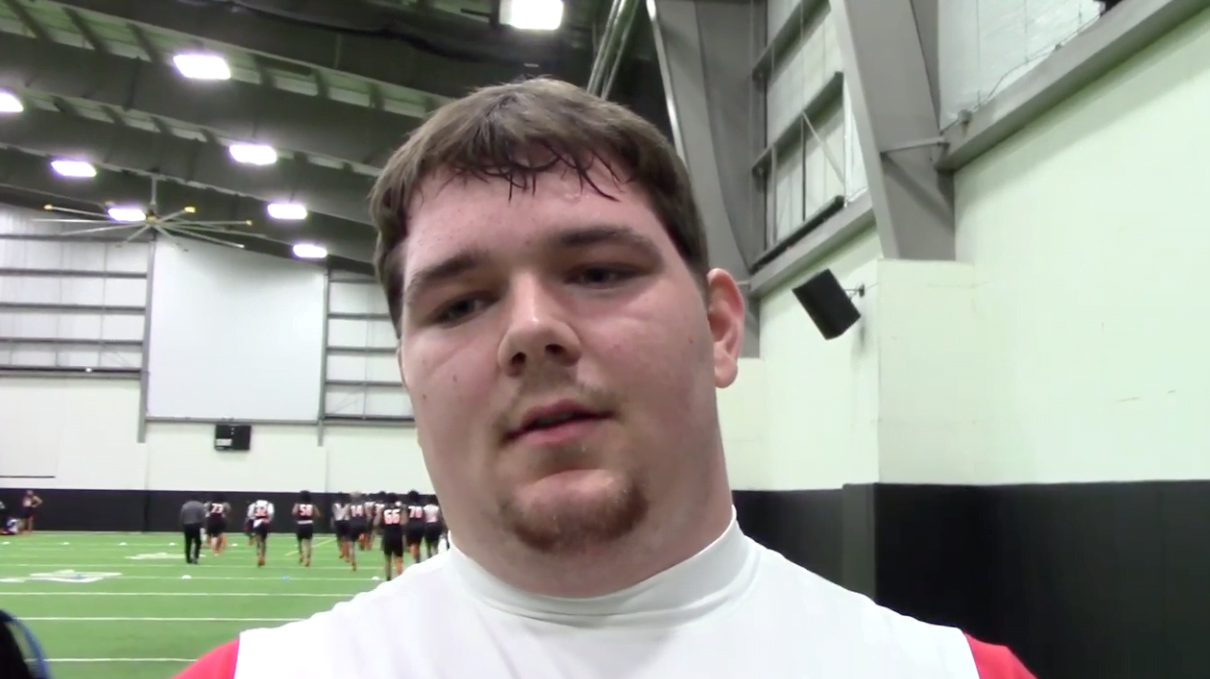 Next up in the 2020 recruiting class film study series is the third highest-rated player in the class, and second highest-graded offensive lineman, three-star in-state product Eli Russ. My first two breakdowns from this class can be found at the links below:

Before we get into the full film review, I wanted to provide some background on the 6-5, 305-pound lineman. Russ helped lead the Plainview Indians to the Oklahoma 3A State Championship game where they lost to Lincoln Christian 42-21. The big man primarily lined up at offensive tackle, on the right side early in his career and then eventually moving to the left side. He also saw some time on the other side of the ball as a defensive lineman.

I was able to watch two of Plainview’s games from his junior season against 3A opponent and playoff team Marlow, as well as their early-season contest playing up a class against 4A Elgin. In addition, I watched two games from his senior season, their second-round playoff matchup against Checotah and the previously mentioned championship game against Lincoln Christian.

Below, I’ll cover multiple key areas of offensive lineman play at the college level and analyze how Russ fares in each category.  In the videos, Russ is number 76.

Russ is an absolute monster in the running game. At the Oklahoma 3A level, it really isn’t even fair. The Ardmore native explodes off the ball, does a good job uncoiling his hips, extends his arms and drives the defender backwards, consistently opening up running lanes for the ball carrier. Here’s a clip from the Lincoln Christian game (again, he’s the LT).

In addition, he isn’t just looking to move defenders off the line, but he’s looking to pancake them into the ground. He does this by using his leverage and getting his man off balance as he explodes through them, as you’ll see in the following video.

Along with being a dominant force as a drive blocker, he also has the ability to cut block and makes great use of angles as a puller. Even in the 3A championship game in which they lost to Lincoln Christian, Russ was still manhandling defenders on a consistent basis.

There were some instances when Russ didn’t block through the whistle later in the games, but I believe once he spends some time training with OSU strength and conditioning coach Rob Glass, I don’t think this will be an issue in the future.

Russ has nice technique after the snap, doing a good job of getting into a balanced stance with a good frame to handle multiple different types of rushes. His length allows him to be an excellent protector on the blindside, keeping rushers at a good length, not allowing them to get in close and make a path to the quarterback. Additionally, he does a solid job of keeping the appropriate width of the pocket. This technique is displayed in the video below.

At the high school level, power rushers were basically no concern at all, as Russ’ pure strength allowed him to fend off pretty much everyone he faced with this rush style. However, his lack of lateral quickness posed problems at times. He would sometimes become flat-footed against speed rushers and would lose leverage, allowing the defender to push him back towards the QB. It would seem like in these situations a smaller defender was out-powering him, but in actuality Russ was getting pushed around due to being off-balance.

If he gets a few of these technical issues cleaned up in pass protection, he could be an elite pass blocker due to his overall size and strength.

The Oklahoma native was frequently asked to be a puller in the running game. The Indians liked to run “Dart,” in which the back-side tackle pulls and leads the running back through the hole, as shown in the image below. 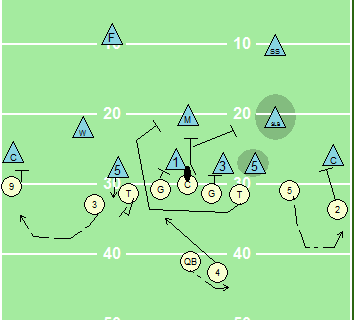 In the next clip you’ll see an example of Russ pulling.

Against Checotah, Russ looked lost at times when pulling and wasn’t able to find a man to block through the gap. The Wildcats were lined up in a three defensive linemen front for the majority of the game, and in talking to a friend who coaches in Oklahoma 3A, although the three-man front is becoming more of a trend, it’s not what every team is running.

In watching Russ’ film from his junior season against Elgin and Marlow, both teams were in four defensive linemen fronts. So, the confusion on the pull might have come from the defensive set, and it shouldn’t be held against him as he will have a lot more time to practice against this defense in Stillwater.

Overall though, Russ takes great angles and moves under control when attacking defenders at the second level. When he gets his hands on smaller defenders in these areas, they don’t stand any chance of making a play on the ball. He had a very high hit rate on these types of defenders when attacking them at the second and third level of the defense, as you’ll see a big hit in the following clip.

As I mentioned above, although Russ lacks some lateral quickness, this doesn’t mean he isn’t athletic for his size. He has the speed to get out and make a play in space.

I’ve mentioned it a couple of times already, but Russ needs to continue to work on his lateral mobility as he progresses in his football career. He has the foot speed to spring off the line and push up the field vertically, so I know he has the skills to improve on his side to side movement. In addition, he does a great job of driving his feet upon making contact with his defender.

An example can be found in this next video.

As Gabe Brooks mentioned in his analysis of Russ for 247Sports, “Balance and body control will be key areas for Russ as he matures and continues to grow into his size.”

Russ has a fierce hand punch which consistently lands in a great spot, inside the defender and then once he gets ahold of his man, it’s pretty much game over. I don’t think I saw him get his hands swiped away once in the four games I watched. Additionally, he rarely places his hands too far outside and, as I previously mentioned, does a great job of extending his arms and keeping the defender at a good distance.

I’m really excited about what guys like Pullen and Russ can bring to this Cowboy offensive line. Coach Dickey has some nice pieces coming in with this class and I think we will continue to see this unit improve in the future.