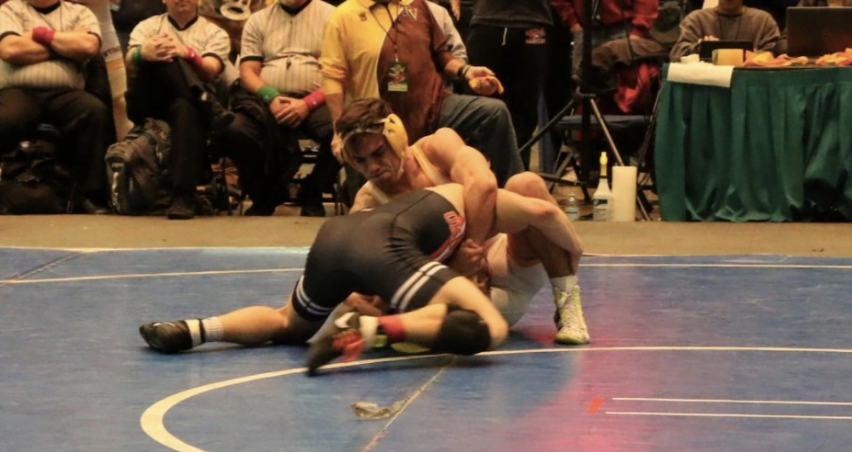 Oklahoma State did not send any starters to the Tournament of Champions. No Cowboys were expected to make a significant impact in the tournament following the much anticipated dual with No. 8 Cornell.

Due to weather, several other programs that had promised to send their top squads to Reno this weekend, including No. 2 Penn State, were not able to make the tournament. A snow storm moved through Denver causing several east-to-west flights to be cancelled, but fulfilling the wish of holiday break skiers for fresh pow-pow.

Regardless, 11 of 16 Oklahoma State wrestlers placed in the tournament which featured starters from other Big 12 schools. The team championship at Reno highlights the depth that Coach John Smith and staff has put together at Oklahoma State.

And your Most Outstanding Wrestler: @IPickAnkles1! His first collegiate event! #okstate pic.twitter.com/3KqO9wT8cA

Meredith wrestled Oklahoma State’s Dean Heil in the finals of the 2016 NCAA Tournament, a very tough 5-3 decision for Heil in his sophomore campaign that put an end to the Meredith underdog story. Meredith came in as the 14th seed at those NCAAs after losing to Heil in the 141 pound finals of the Big 12 finals as well.

The match on Sunday started with Lewallen putting a hand to the face of Meredith in a manner a bit too aggressive for the referee, but that “punch” set the tone for the entire match as Lewallen did not let up on the returning finalist for the entire seven minutes.

Lewallen scored in the first twenty seconds of the match with a wonderful single leg that led to a double leg and a takedown that nearly put Meredith on his back, but Meredith was able to get out of Lewallen’s hold quick. Lewallen proceeded to fight off every Bryce Meredith takedown attempt for the entire match.

Late in the third period, Lewallen got another double leg takedown resulting in a 7-3 decision win for Lewallen and the 141 crown in the Reno Tournament of Champions.

See what @IPickAnkles1 had to say about his big day in Reno! #okstate pic.twitter.com/WLyhk9dcDc

“It’s a good stepping stone,” said Lewallen. “Competing hard. There’s no other way to compete for me.”

Lewallen posted a 141-9 record and won three state titles in his weight class at Yukon High School. With returning national champion Heil only being a junior this season, it will be interesting to see if Lewallen waits until his time to lead the Cowboys in the 141 weight class, or moves to a different weight.

The Cowboys will be back in action on New Year’s Day in the Southern Scuffle in Chattanooga, TN. Their next home dual will be on January 15th against the No. 3 Iowa Hawkeyes.

Places are as follows: