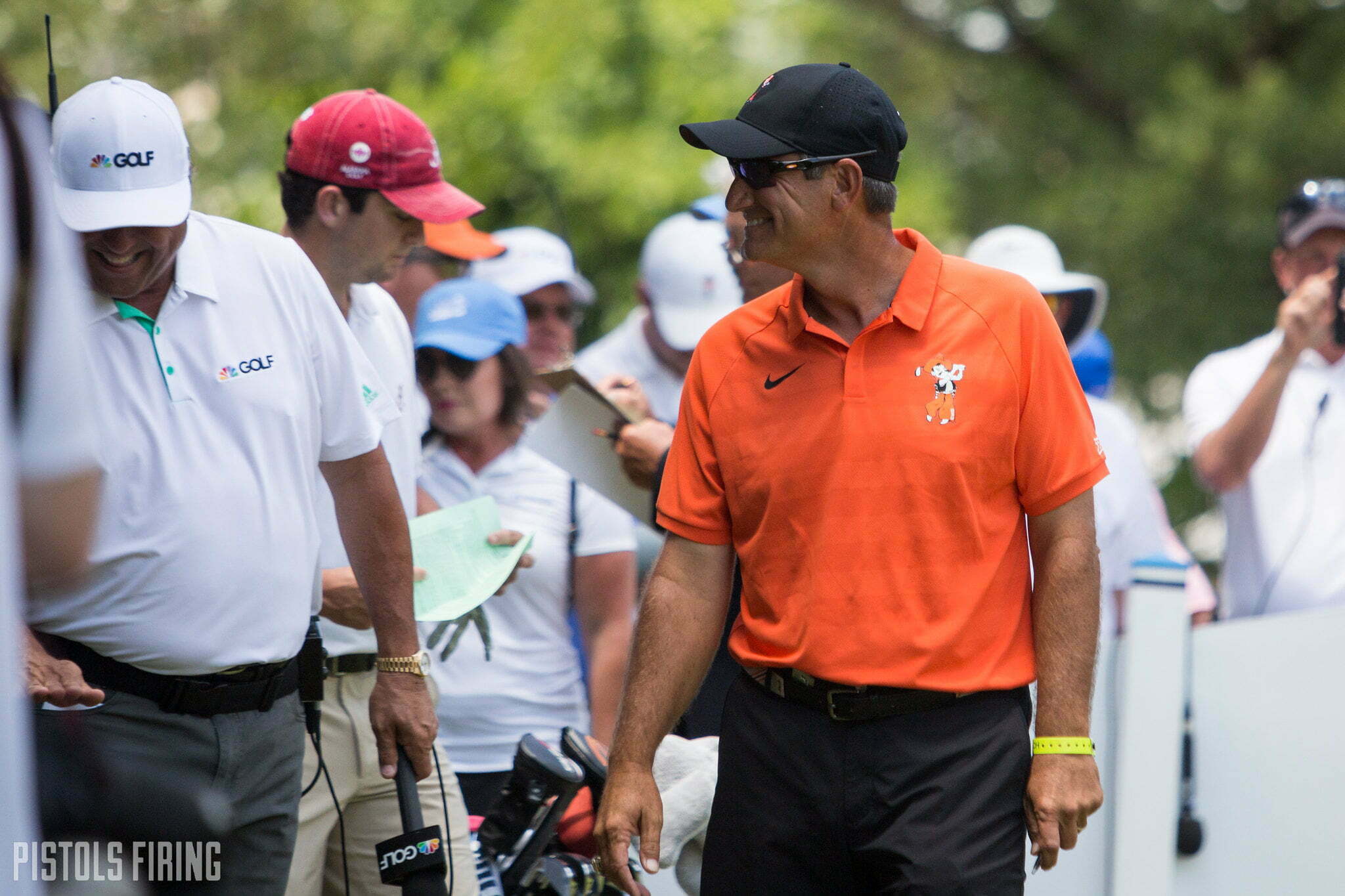 Stanford beat Texas on Wednesday. Cole Hammer shot 34 on the front instead of another otherworldly 30. Oklahoma State — while able to make a case as the best team — is still not the champs. I am bummed.

Here are five final thoughts on OSU’s 2019 postseason golf run, everything that went along with it and what they have in front of them in 2019-20.

1. Alan Bratton is rolling: Lost in all of this is the work Bratton has done as the captain of the S.S. Karsten. OSU’s finishes at the NCAAs since he took over:

They won one tournament combined in the two years before he took the reins in 2013-14. They’ve now had four seasons since then in which they’ve won five or more times. They took home 16 or 17 team events over the last two years (depending on how you feel about that 31-stroke win in stroke play), and he’s recruiting (and getting) the best players in the country. And doing it all with an even-keeled attitude under the watchful eye of somebody in Mike Holder who knows what success at a golf school looks like.

Look at this quote following the match play loss on Tuesday at a time when I would have been ripping NCAA signs and hollering about how much money Golf Channel is making off the format.

“We had a fantastic year,” said Bratton. “What good theater that was right there. Hate to see it end that way, you don’t see lip-outs like that very often, but there was no one on our team I’d want to end that spot other than Zach, that’s why he was in that spot. He has been a star for us. We had a fantastic week. It’s not hard to find positives at all. That is not the way we wanted to week to end but you’ve got to give Texas credit. They got three points and that is what it takes to win.”

Matthew Wolff is the best golfer in Oklahoma State history … and I’m not sure it’s even that close.

There, I said it. Feels good.

Most accomplished golfer? No. Best pro? We’ll see. But based on two years of play, 39 rounds in the 60s, the single-season and career scoring averages as well as six victories (including an individual national championship), I have no competing evidence that tells me he’s anything other than the best golfer to ever step foot in Stillwater.

There are innumerable ways I could make this point, but think about this one: Rickie Fowler is currently the No. 10 golfer on planet earth right now. In two years at OSU, he had 18 rounds in the 60s and compiled three wins. Wolff had 39 rounds in the 60s and six wins in the same amount of time. Does that ensure professional success? Of course not, but I hope that highlights just how preposterously good he’s been (also: read this asap).

3. Match play has cost OSU three titles: The Pokes finished first in stroke play in 2009, 2010, 2018 and 2019, and they only walked away with one of those trophies. I think I made my feelings on this idea well-known on Tuesday, but the inevitable fallout from both sides of the lightning rod match play issue has been incredible.

Before we get to that, though, here’s maybe the best take of them all.

OSU won by eight at Karsten last year and by 31 at Arkansas this year. But sure.

Look, I get the arguments. PFB Nate hollering about how it’s like a free throw contest or a game of three on three. Everybody up in my mentions about how the exploitation of the student-athlete is actually everything that’s wrong about all of this. Ok.

Here’s the reality: College golf, like all other non-basketball and non-football college sports, is not interesting. It’s not interesting because we don’t know the characters because nobody has time to follow it 12 months a year. And when you don’t know the characters in a golf tournament, there is no interest. And if there is no interest then you’re rowing or gymnastics.

So again, if the collateral damage of creating a championship that’s actually intriguing as hell is that sometimes the best team doesn’t win that championship then so be it. Sometimes (most of the time) the best college basketball team doesn’t win it all either. Fine, the collateral damage of March Madness. I’ll take it. It’s incredible theater, and I don’t see Kentucky hooting about how every round should be a seven-game series.

The folks making these decisions care less about how many banners are hanging in GIA and more about the future health of the sport as a whole.

It was done partly in an effort to try to better package it for television. Just about every other collegiate sport is televised except golf. This doesn’t make since considering the popularity of golf and the number of other golf tournaments that are televised. Since the mid-1960s we had a 72-hole medal event. Through all the years we rarely had spectators except for one year in the early ’70s when had a crowd of 10,000 when we hosted the championships at Stillwater and when Tiger was playing for Stanford in ’96 at the Honors Course. But, by and large, it’s been primarily friends and family who’ve come out, which is funny because I think you’ve got a great product. –Mike Holder (2010)

While golf will never stand on its own financially, the NCAAs being as big of a deal as they are could (and often does) matter when thinking about the future of athletic programs. Plus, whether you agree with it or not, it remains probably the third–most compelling championship in all of college sports despite not being the third-most popular sport.

In other words, not rowing.

4. The great thing about match play: I ranted about this on Wednesday on my golf podcast, but the best thing about match play is how exposed your team is. In stroke play, only the top four scores count, and a Hovland-Wolff duo can carry you pretty deep. In match play, though? It’s every man for himself, and when those men are simply college kids trying to make a par on national television with everyone they’ve ever known watching, well, what’s better drama than that?

5. The future: OSU loses a lot. Like, everything. Gone are Wolff, Bauchou and Wood (and likely Viktor Hovland, too) as only sophomore Austin Eckroat is probable to return (get back to me after he makes the cut at the U.S. Open in two weeks. Eckroat will anchor a team that will feature a ton of youth. Potential first-five guys include current freshman Aman Gupta (who actually won in 2018-19 but had a scoring average north of 72) and a crop of incoming freshmen who are headlined by the No. 15 amateur in the world, Indian Rayhan Thomas.

There are questions — like if Eckroat can be a No. 1 guy, how Thomas will adjust to life in Stillwater, USA, which of the other freshmen steps into the starting lineup, whether Rasmus Neergaard-Petersen or Ferdinand Muller (two other guys on the current roster) can show out and even *crosses all fingers and all toes* whether Hovland improbably decides to return.

But it’s been a two-year whirlwind in the hands of somebody in Bratton who clearly has plans on perpetuating the tremendous tradition of Oklahoma State golf many, many years into the future.