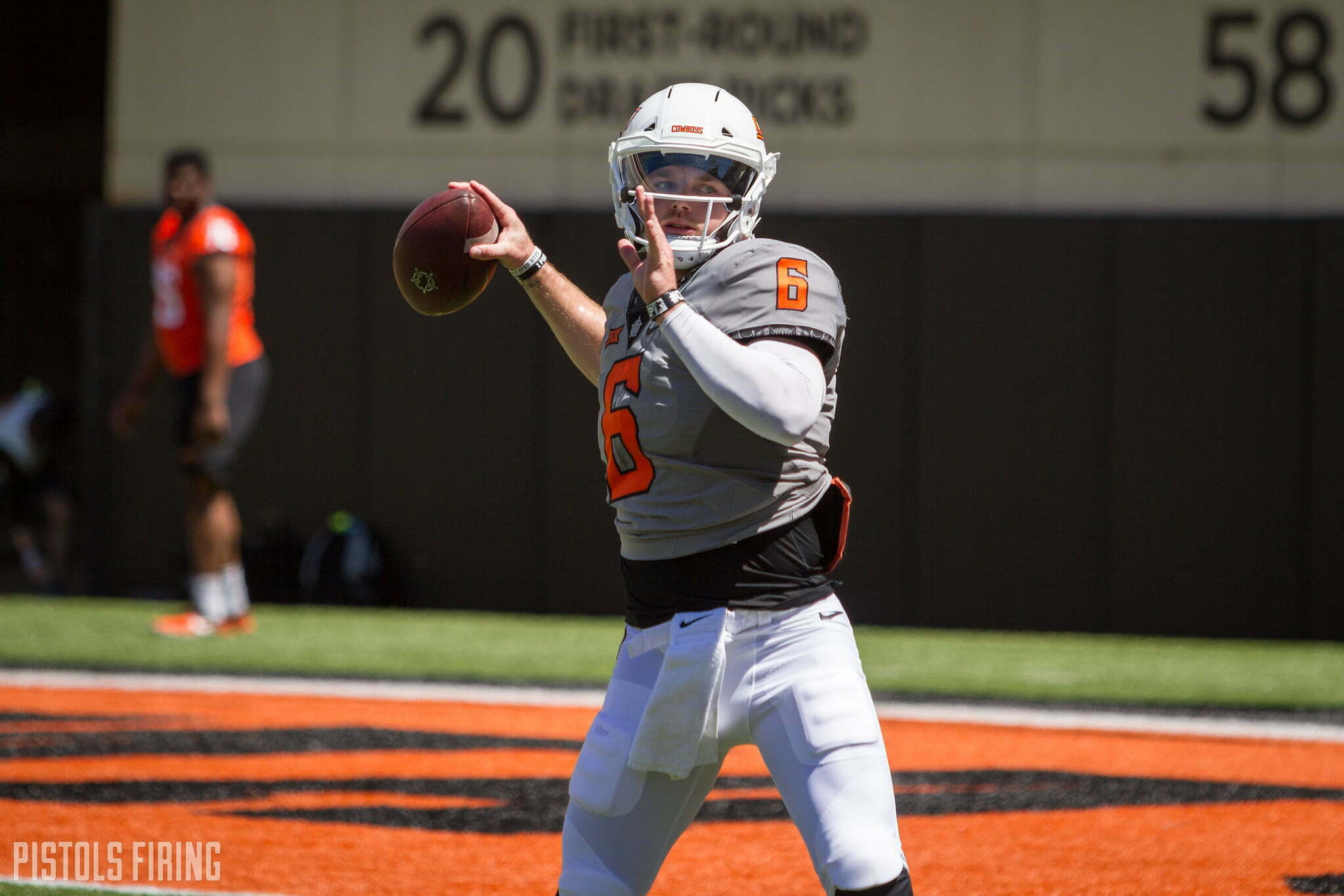 Good morning, my name is Kyle Porter, and I believe I still work here at White Maple Media, proprietor of Pistols Firing. I have emerged from a post-Masters, post-Cat fog, and this will stun you but I have some Oklahoma State quarterback takes.

Take 1: I watched the highlights that were available, and a couple of things became apparent. The first is that Dru Brown’s arm is magnificent for somebody that small. The velocity with which he flings the ball — especially from short to medium range — is almost shocking to witness (watch the clip below at 1:03). The other thing that stands out is how similar the two appear from a performance perspective. They’re both agile, able to throw on the run and seemingly capable of making all the throws (again, I’ve seen 200 seconds of film from an open practice so bear with me here).

Take 2: Based on people who were there — namely Marshall Scott, who covered the cotillion for us — Sanders and Brown are 1A and 1B when it comes to winning the job. It’s tight enough that a single INT or one impressive drive is enough to flip loyalties on whether No. 3 or No. 6 should be pulling the levers in Corvallis to open 2019.

Take 3: Take 2 seems inconsequential and obvious and has been a primary talking point by those who have been in attendance at practices all spring, but it’s actually quite revealing. The reason is the same reason I thought Spencer Sanders should have played in 2018.

If a younger quarterback is even 10 percent or 5 percent worse than an older quarterback — especially one with just one year left on his collegiate tenure — then the younger quarterback should almost always play in years in which a championship season is infeasible. Therefore, if Take 2 is true and you believe that Dru Brown is better than Spencer Sanders but not to the degree that it will result in any sort of meaningful title, then Sanders should be the starter because it will be better for the program in the long run.

Whether this logic comes into play, I don’t really know, but Gundy himself said last year that you don’t really understand who you are as a quarterback until 15 games in. Obviously Brown has already played 15 games of college football, but Hawaii is a different world than Morgantown or Norman, so much so that the concept might still apply.

And if it does but Gundy still goes with Brown then that will be three straight seasons (2018, 2019 and 2020) of a quarterback not hitting his 15th game in an Oklahoma State uniform. Therefore if the QB race is close — and it appears that it is — Sanders should (and probably will) be the starter.

Of course when has logic ever ruled college football’s QB races?

Take 4: Is C.J. Moore good enough that Tylan should think about transferring?

Take 5: Wanted to make sure you were still with us.

Take 6: Both quarterbacks are faced with a fascinating conundrum this spring and into the summer and fall. Take chances on impressing coaches and players with throws and, and you run the risk of turning the ball over, which Gundy hates more than I hate the rattlesnakes he hunts. Don’t take chances and you run the risk of not impressing coaches and players and leaving a thousand “what ifs” on the table. It’s an odd situation to be put in, and while I understand Gundy’s disdain for picks and not protecting the ball given all of OSU’s playmakers, it seems like some sort of a five-month grace period should exist for both of these guys.

Take 7: One of the interesting parts about no public exposure in a game setting is that the conversation about who starts ends with “Gundy’s got this” even though all the evidence we got in 2018 actually in fact said “Gundy does not got this” and Gundy himself did the “I did not got this” interview with Bill Haisten a few weeks ago.

Whether you believe this is problematic or not probably depends on how confident you are at evaluating football and football players. I am on the lower end of that spectrum so I am fine with existing in a “Gundy’s got this” world based on talent and performance alone. Where I get wary of Gundy and his decision-making is when it comes to logic and long-term decisions (see above). Would Dru Brown be better for Oklahoma State in 2019 than Spencer Sanders would? Maybe. But will Brown in 2019 and Sanders in 2020 and beyond be better combined for Oklahoma State as a program than Sanders going from here on out? I’m fairly dubious.

Take 8: Neither QB is going to transfer based on how things stand right now, which is a good thing for Oklahoma State because I think both are going to play in the fall. OSU has often been plagued by injuries at QB (because of how many plays it runs on offense?), and (though I disagree with the idea) Gundy has even insinuated that both could play off and on in the fall. So no matter how it happens, I think they’ll need both at certain points to be good for OSU to be great.

Take 9: I’m not sure there’s a better scenario for Sean Gleeson to use two QBs on the field at once. If it’s going to happen, it would be perfect for it to happen with a pair of fleet-footed, hard-throwing quarterbacks that Gundy may or may not be able to make up his mind about. And at this point if we don’t get a Brown-Sanders-Wallace 6-3-2 double play at some point in the fall I’m going to be extremely disappointed.