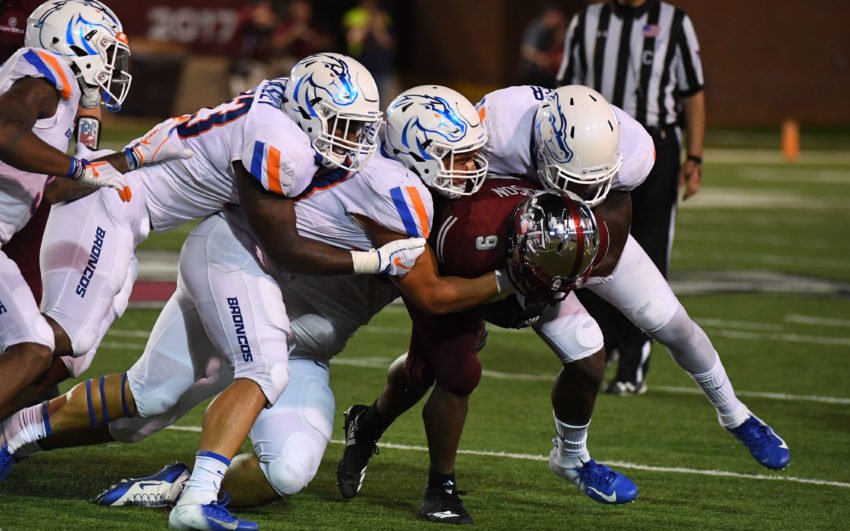 The Boise State Broncos enter Saturday at 2-0, and although their offense has exploded in both their season opener and most recent contest against UConn, their defense shouldn’t be overlooked. Boise State’s defense returns 10 of their 11 starters from last year, and their defensive line might be the team’s strongest position group. Here’s a quick primer on BSU’s starting front.

The Broncos return all four of their starters at their front four and many of their backups. Curtis Weaver had an 11-sack campaign as a freshman and returns to be an impact player at the Broncos’ “stud” position. Former All-Mountain West second-team selection Jabril Frazier and all-conference honorable mention Durrant Miles, who had two sacks and a forced fumble two weeks ago against Troy, also hold down the edges for BSU.

Sonatana Lui and legitimate NFL prospect David Moa are the Broncos’ star interior lineman, and with Moa expected to be fully healthy from injury on Saturday, Boise State could have its biggest advantage up front against the OSU offensive line.

The Cowboys should be able to match talent for talent on the interior with experienced lineman like Marcus Keyes, Johnny Wilson and Shane Richards holding the most experience. But tackles Arlington Hambright and Teven Jenkins will have their biggest challenge of the season to date keeping a clean pocket for Cornelius to throw from.

As far as the run game is concerned, the Cowboys’ ability to run the ball against the Broncos will be one of the game’s biggest determining factors. Their defense’s secondary is too good for the Pokes to try and pick apart without a ground threat. OSU struggled a bit in the run game against South Alabama last Saturday, as head coach Mike Gundy spoke about in his Monday press conference, and the unit will have to be better to take pressure off first-year starter Taylor Cornelius.