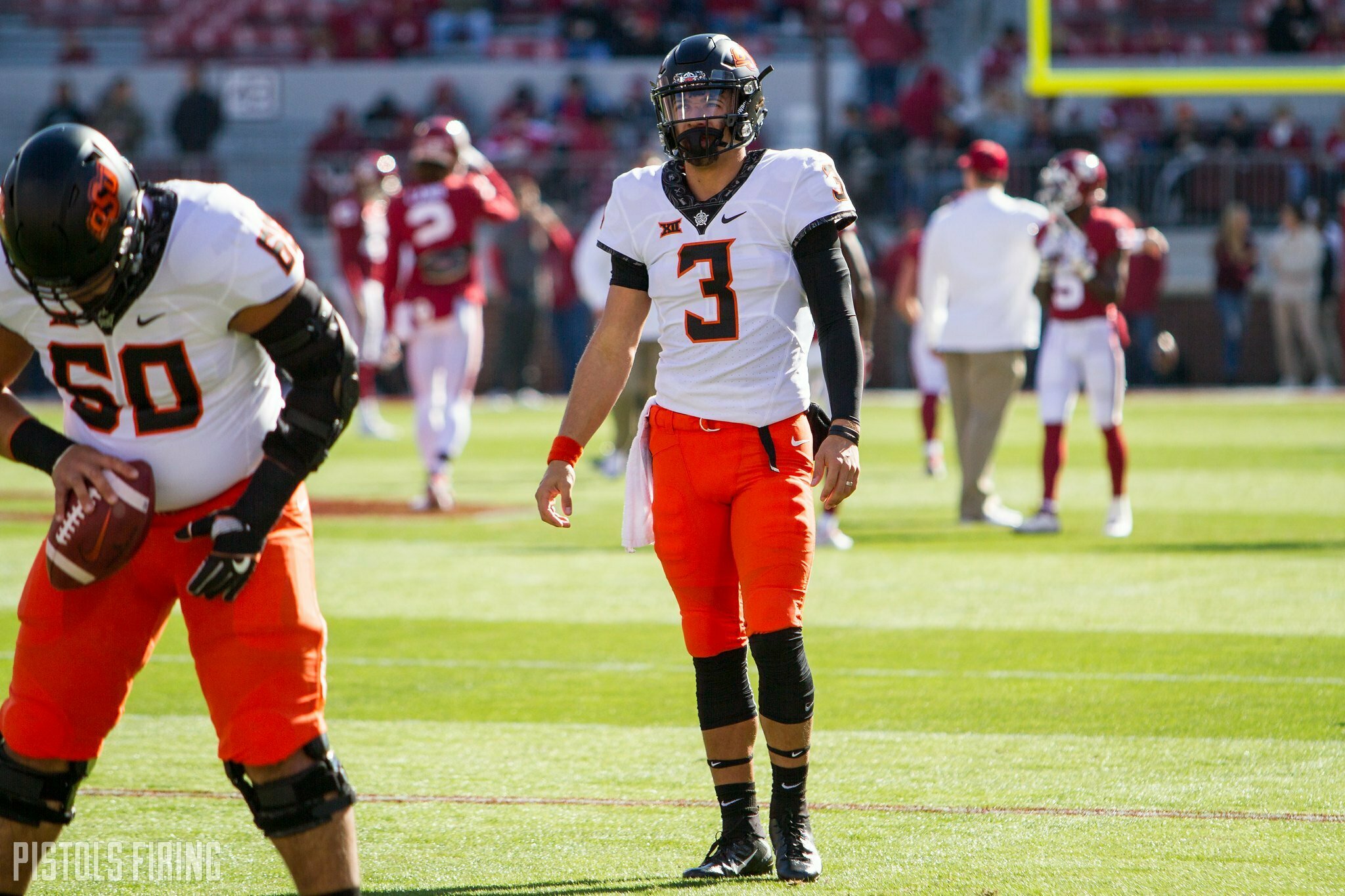 The college football season is about two months away.

As the country waits for its top amateur sporting season, PFB starts its position breakdowns. We’ll start with the most talked about position of any football team, but especially this one, as Oklahoma State will have a new gunslinger in the backfield in 2019.

With the departures of John Kolar and Keondre Wudtee, the Cowboys have only four quarterbacks on its roster as of now. If that number holds entering the fall, that’ll be one of the thinner groups of quarterbacks in recent years.

Dru Brown (R-Sr.): Dru Brown enters the season as the only quarterback on OSU’s 2019 roster to have played a snap as a Cowboy. It came as a handoff in the Liberty Bowl. A California native, Brown is at his third school after spending the 2015 season at juco College of San Mateo and the 2016 and 2017 seasons at Hawaii. Brown is obviously the group’s most experienced player, already having thrown for 5,273 yards at the FBS level.

Brendan Costello (Fr.): Brendan Costello’s decision to enroll early to a team without a returning starting quarterback was a smart one. Although Costello isn’t likely to win the job, the extra reps he got this spring can only help him going forward. Another California native, Costello hails from San Clemente High School, a school that has grown used to producing D-I quarterbacks. As a senior with the Tritons last year, Costello threw for 2,328 yards and 22 touchdowns while running for another 658 yards and nine scores.

Spencer Sanders (R-Fr.): The third-highest ranked quarterback to ever come to OSU, Spencer Sanders road the bench through all of OSU’s 7-6 2018 season to many fans’ chagrin. Sanders went 46-6 as a starter at Denton-Ryan (TX), as he was All-Texas everything. Sanders brings athleticism to the OSU backfield that hasn’t been seen in a while. As a senior in high school, Sanders threw for 3,845 yards and 54 touchdowns and ran for another 1,380 yards and 16 touchdowns.

Shaun Taylor (R-Fr.): The last time OSU walk-on Shaun Taylor was a starting quarterback, he put up some gaudy numbers. In 2017, Taylor threw for 4,153 yards and 60 touchdowns as a senior at All Saints Episcopal in Fort Worth. All Saints went 11-1 that season, scoring 46.7 points per game.

The two-horse race that started at the final whistle of the Liberty Bowl is still without an announced winner.

The consensus from the outside seems to be with Sanders, and that argument has some backing. Gundy talked extensively last year that it takes time for a quarterback to truly feel comfortable. Going with the redshirt freshman would build that experience, where as going with the fifth-year senior would force OSU to restart that clock again with a new quarterback in 2020.

With that said, if it’s determined that Brown gives OSU the best chance to win in 2019, going with anyone else wouldn’t make too much sense.

Apart from pregame warm-ups, Brown’s on snap in the Liberty Bowl and old film, the open spring practice is all the public has seen of the quarterback battle. At that open practice, the two performed fairly evenly. Both had good moments, and both threw interceptions. Afterward, Gundy said that’s how it had gone most of the spring.

At Princeton, Gleeson wasn’t afraid to use multiple quarterbacks, sometimes even using multiple quarterback at the same time. Although Gundy didn’t go to the extent of saying both will start at Oregon State, he said there is a possibility both play in 2019.

All D-I football players are athletes, but this quarterback room looks to be an extra athletic bunch.

All three scholarship quarterbacks are considered dual-threats, particularly Sanders. As a senior in high school, Sanders ran for 100+ yards in eight of his team’s 15 games.

As a sophomore at Hawaii, Brown ran for 306 yards, and Costello averaged 55 rushing yards a game as a high school senior last fall.

Mason Rudolph wasn’t much of a runner in his dominant tenure in Stillwater, but Taylor Cornelius showed his wheels some last season, rushing for 406 yards and 10 touchdowns.

Having that extra threat of attack in 2019 could be a big deal for an offensive looking for an identity with a new coordinator.

Experience is the unit’s obvious weakness, and rightly so.

Of the four quarterbacks on OSU’s roster, three haven’t played a snap of college football. The one who has, has played one snap at OSU, and the others came at the junior college level and in the Mountain West Conference.

Most Big 12 teams are like sports cars. If driven correctly, it’ll go fast and look awesome. If not, there isn’t a whole lot (of defense) that’ll protect you from whatever you’re about to hit. Brown and/or Sanders will get the keys to a bright orange automobile this year, one fresh out of driving school and the other used to driving lesser cars.