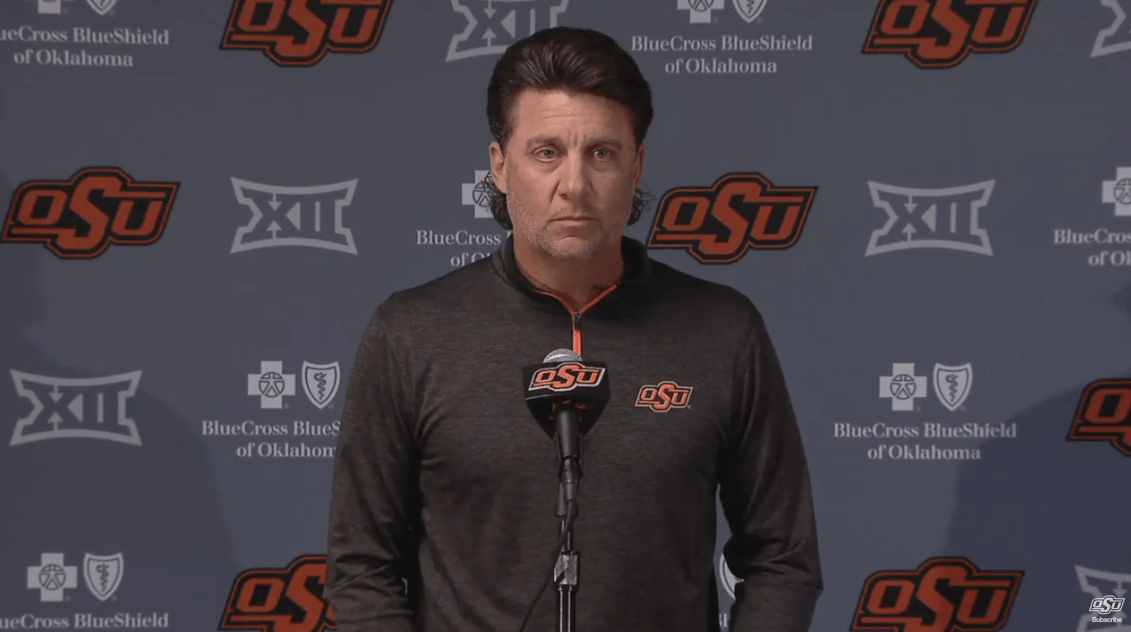 Mike Gundy talked stars, QBs and GPAs on Wednesday in Stillwater. Much to discuss here so let’s dive right in to some notes and thoughts on today’s presser.

• Signing day now is kind of anticlimactic based on the new signing period and most players across the country have been committed for six months.

• Try to match how many players are coming in with how many are going out. “As we start this process we know what should happen and how many should go out.” Only adjustment is filling transfers.

• “We think [the OL] are going to help us win. Otherwise we wouldn’t have signed them.” ?

• Interesting part about recruiting is you don’t know for two years what players are going to do in college.

• OSU was playing catch up at OL for years. “We’re caught up now.” Said Josh Henson has done a nice job of finding guys who fit OSU’s style of play.

• Players who leave OSU feel like they’ve had a good experience and were treated the way they were told they would be treated.

• JUCO players aren’t as high impact as they used to be. They now also need time to acclimate. Mentioned how GPA changes have affected the style of player you get from JUCO. Still, you’re getting a 20-year-old, not an 18-year-old.

• “We were talking in August about how we were set at the running back position for the next 20 years. If J.D. was here, we would not have taken a player from JUCO.” Wants to stay 3-4 deep at RB.

• Lost a lot from the DL, which is why they turned to JUCO.

• Much easier for somebody to qualify to get into school because of the “sliding scale.” Can score horribly on ACT but as long as your GPA is good, you’re in. And vice versa.

• OSU’s new kicker works in a paper mill 5-6 days a week, 10 hours a day. Gundy is in love. “A lunchpail guy.” Comes from same place as Texas’ old punter, “who almost beat us by himself.”

• On Mason Cox’s influence on the kicker: “You’re out of my league now. I didn’t even know who he was or where he came from.”

• Told OSU’s recruiting guy after he saw Texas’ punter from a few years ago, “We need to find a guy like that.”

• Brendan Costello is a late bloomer who’s got savvy and can make tight throws. “Not scared to turn the ball loose.” When OSU offered, his only offer was from Eastern Washington. “Good work habits, tough.”

• “We go after every eight-star, six-star, four-star and every star in the world we can get around here and they all go to other schools at this point so we go get whatever else is out there. Try to find the very best one that fits our system … We kind of work our way from here out, and we usually end up on the east or west coast somewhere. There’s a number of guys in this area that we tried to get in on and they didn’t have any interest in us so we just go to the next guy.”

• QBs will “go other places” from around the country. More common than maybe other positions because there are fewer spots regionally.

• Because of OSU’s success offensively they’ve been able to attract QBs and WRs from all over the country. ?

• Recruiting classes have maybe more communication than the coaches have with the players. Have a group chat going.

• Grayson Boomer should be 20 pounds heavier in 18 months. “I see a Blake Jarwin in him potentially. If that works, that will be good for us.”

• “We don’t branch out very much. We’re going to make our living in Oklahoma and Texas.”

• Louisiana has “the same kind of people” as Oklahoma and Texas. Blue collar. Salt of the earth. Et al.

• Gundy likes Trace Ford because he’s good at baseball. Won’t let him DH for Josh Holliday. “Then he wouldn’t be in the weight room.”

• “Guys who can play three sports are generally better athletes than guys who play one sport.” Rudolph is one of the few QBs OSU has had who wasn’t a multi-sport guy. Noted his awful first pitch at Allie P.

• “It’s a very anticlimactic day compared to the past. These guys are set. You don’t get a lot of comments one way or the other.”

• Three guys OSU is in on who haven’t signed. Aren’t hounding them like they would have used to.

• Said we’d be surprised at how little recruits know about your program, your team and its success. They come to campus in the spring, spend a day or two, investigate academics etc. Less about football than it used to be.

• “The relationship they have with their position coach is the most important thing now. More so than some of the other stuff people will talk about.”

• “We’re on three hard that I think will make a decision before the end of the day.”

• Kept referencing “the portal” re: transfers. It’s the database where coaches can recruit transfers. “You’ll probably have to have another recruiting service just for portal recruiting.” Lol!

• Said there are 29 guys outgoing.

• NCAA needs to adjust the rules of 25 players per class. Has to just go to 85 scholarships overall. “Got a little ahead of themselves.”

• Good relationship with Booker T. Demarco Jones has good cover skills and good feet. “I think there will be a trend in this league … where you might sign four corners a year and one safety.”

• Won’t take scholarships away because of high school injury. Even if they can’t play in college. “When we make a commitment to a young man, we keep our commitment.” Pretty cool.

• Early enrollment for Costello is “huge for him.” It’s not for everybody, though. Some people want to hang out their spring semester in HS, which Gundy confirmed he would want to do, too.

• Two out of 10 guys probably should have stayed home rather than enrolling early. Have to counsel them, they’re homesick etc.

• Encouraged by reps from young players leading up to the bowl game.

• Said the last game of the year probably doesn’t affect how guys feel in June. They’ve practiced harder and longer for this bowl than any bowl in a while.

• Playoff has to go to eight. Five conference champs, two wild cards and the Group of Five team.

• “I’m just throwing this out because I like to stir up controversy.” Issue with an eight-team playoff is academic calendar.

• Said Missouri is a top 10 team. Look at the numbers. Look who they played, who they lost to. Mizzou can play with any team in the country on any given day on a neutral field.

• Mizzou always has good defensive linemen that nobody else recruited.

• System allows QB-WR connections earlier than it used to. Across the board, not just at OSU. Happened with 5 and 1 in Norman, too.