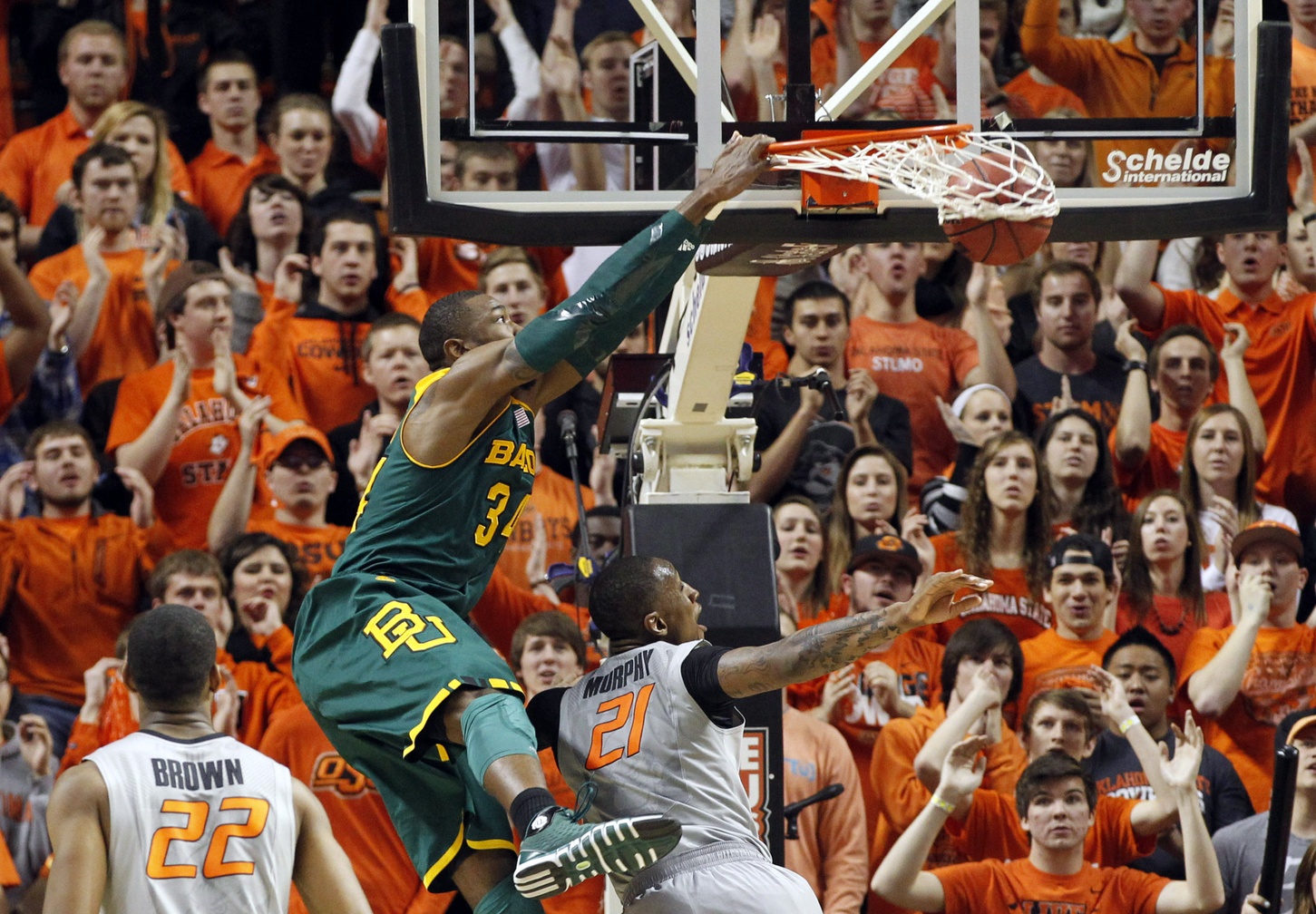 I officially dislike Fran Fraschilla. After devoting air time to chastising Marcus Smart for flopping and even comparing his efforts to that of an Academy Award winning actor (original!), he had the audacity to claim “far be it from me to determine who’s acting this season” after Tyler Neal reacted as if his orbital bone was obliterated by Markel Brown’s finger.

Perhaps that’s why Fran’s been a bit grumpy these past few weeks and refuses to come up with any new material. He’s basically on auto-pilot at this point.

“Phil Forte is missing Smart, who he’s played alongside since 8th grade.”

“Markel Brown came in just as an athlete, but he’s developed into a legitimate basketball player.”

“Travis Ford is really smart and his out of time-out plays are the best in the league.”

He’s probably a game or two away from openly campaigning to be fired so he can stop studying film of Ford’s teams. I hope to be the first to say ‘good riddance’.

That ended a 5-game losing streak for Baylor. At the time, OSU fans didn’t know how good they had it and complained about losing a fairly competitive game to a talented, if underachieving, bunch.

Now? I think everyone would accept a 6-point loss with realistic opportunities to win the game in the final minutes. Well, as realistic as it gets considering Travis Ford is calling the shots.

But, this is supposed to be about Baylor. That’s the worst part, one of the worst parts, one of the seemingly unending list of worst parts about this basketball season. We can’t make fun of Baylor for being a highly-talented, highly-ranked early season team with high hopes who’s now a longshot for the tournament. OK, we can, but it’s difficult without making ourselves feel bad in the process.

This game is in Waco, which I’ve never been to because I’ve never done anything that would make me hate myself that much, nor call for that strict of a punishment.

I guess that means I’ll miss out on what the Waco Wikipedia page considers attractions. Woe is me that I won’t get a tour of the Dr. Pepper Museum, Texas State Technical College, or the Waco Suspension Bridge. It’s entirely possible that Marcus Smart negotiated a third game into his suspension to keep from having to visit.

We’re all familiar with OSU’s season, yes? Well, replace the black and orange with green and yellow. That’s pretty much it. They’ve experienced less turmoil, but from the early expectations, to the questions about the head coach, to the women’s team overshadowing and outperforming them, Baylor and OSU are neck and neck.

The Bears are currently riding a two-game win streak, which totally counts as a streak even though it includes a win over TCU and is only two-games long.

They’re coming off a double overtime victory over K-State at the Ferrell Center, which is their first home win since January 11th.

Are we sure advertising that suspension bridge is such a good idea?

For some basic info/insults about the comparative top of the line Bears, go back and read the first Baylor preview. Today, we’re talking about the best of the rest. You could also call this scraping the bottom of the barrell. Either way, you’re right!

There’s a reason that Royce O’Neal comes into the game, but I haven’t yet figured out what that reason is. He’s fourth on the team in minutes and has turned the ball over more times than he’s made a shot. For each hour he’s allowed to play, he gets about nine shots up. It’s almost as if he’s the equivalent of a seat filler and Baylor’s actual player has been taking an extremely long bathroom break.

Gary Franklin was forced into increased minutes while Kenny Chery battled an injury. He’s turned it over more times than he’s attempted a 2-pointer. That’s impressive, but not nearly as impressive as the “sell job” that Scott Drew needed to convince Franklin that Baylor was worth leaving Cal-Berkley for.

Taurean Prince and Ish Wainwright don’t really do the same things, but they don’t seem to be allowed on the floor at the same time. Most likely because if they ever played meaningful minutes together, it would send Coach Drew running for the suspension bridge.

These two also don’t particularly impact a game at all. Wainwright does inexplicably make a couple of plays now and then. Consider him the Waco version of Tyler Neal.[1. Not a compliment.]

The Bears are the odd team that doesn’t seem to play better in front of their home crowd. After winning their first nine home contests against glorified practice squads, (sorry, Northwestern State, I just call them like I see them), Baylor has dropped four of their last five.

If you throw out the two overtimes against Kansas State, this team hasn’t scored more than 64 at home since their conference home opener against TCU, which again, doesn’t really count.

On the year, this team averages nearly 76 points per game, even with those dismal home performances in conference factored in.

It’s not just a conference slump, either. On the road in the Big 12, Baylor is averaging about 75 points per game with a low mark of 68.

I don’t mean to get your hopes up about a Ford coached team on the road, in conference, without one of their best players. I’m just trying to establish how embarrassed we should be should OSU lose.

These next three games are OSU’s best chances for wins the rest of the season. At some point though, the issue becomes how many times the players can lose before it starts to affect their preparation, attitude and commitment.

The past three road games have been complete embarrassments for the Cowboys, although for different reasons.

Travis Ford has never won in Waco. OSU hasn’t won there since Byron Eaton’s freshman season. That was 2006. In other words, Eaton’s lost 30 pounds and gained at least 200 since the Cowboys last walked out of the Ferrell Center victorious.

Is it possible for OSU to steal this one? Sure. But that involves unlikely scenarios like Brown, Forte and Sager going a combined 21-27 from long range. Murphy, Nash and Cox combining for 15 offensive rebounds. Or, Ford out-coaching the opponent.

I can’t call this one in favor of the good guys, but at least I can drink, swear and dance freely. Also, I never have to go to Waco.