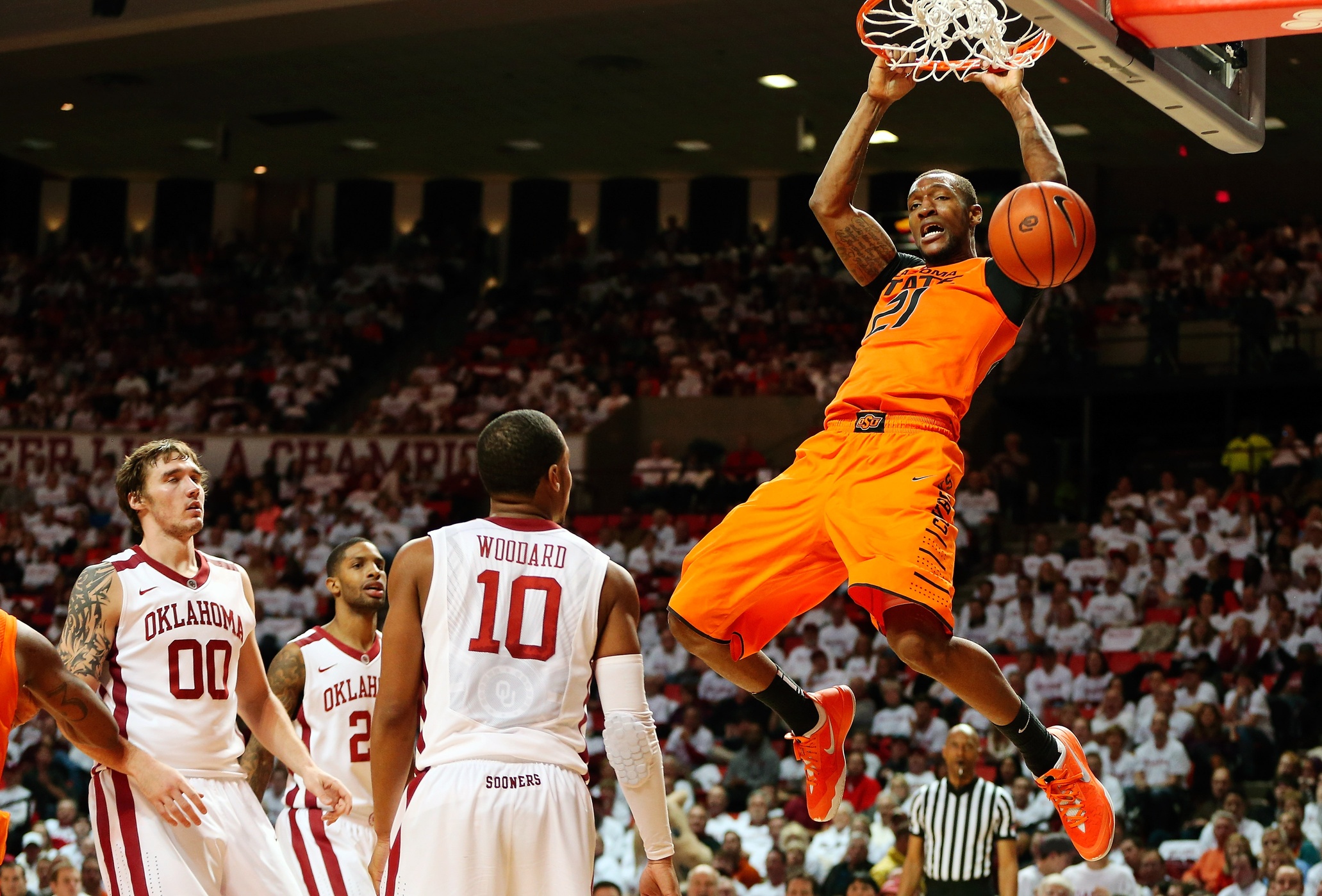 The dislike I feel toward most of Oklahoma State’s opponents is learned. I’ve been subjected to a team, a coach, or players that have left bad tastes in my mouth and conditioned me to forever feel ire towards an institution.

There’s no learning curve needed in the case of OU. My hatred isn’t developed over time, it was developed in the womb. It’s not that I was born with a hatred of crimson and cream. It’s that a concentrated ball of dense, dark matter hate existed and my body formed around it.

When Ryan Minor high steps or Kelvin Sampson rolls around on the floor, that little ball ignites into a towering inferno. My name is Dylan and during Bedlam, I spit hot fire.

I have friends who made a four-year mistake in Norman. Is that one of the low places that Garth sang about?

I even have a sister who chose to forsake her family. She’s not the black sheep, she’s the no sheep. She doesn’t get to be a sheep.

Even though I didn’t need help to know that the Sooners are evil, they’ve gleefully supplied me with plenty of evidence. Perhaps none as damning as forcing the Pokes to close the doors on old Gallagher-Iba with a loss. I hope the ghost of Mr. Iba has enjoyed haunting Eduardo Najera.

Their fight song is maddeningly simple and repetitive. In fact, they surely stole it from a mental patient who couldn’t stop humming that tune. Lambchop has had fewer people curse him for sticking a song in their heads.

They have as little hope of identifying what color crimson actually is as they have using the correct abbreviation for “University of Oklahoma”. Maybe Wal-Mart printed it backwards originally and the administration decided to go with it rather than force all of their fans to buy new gear.

And yet, for every yin there is a yang. Without the dark, monstrous presence of the Sooners, there could be no shining beacon of light called Oklahoma State without throwing the universe completely out of balance. I don’t know about you, but an unbalanced universe sounds like a utopia.

Head Coach Lon Kruger, who is confusingly hard to dislike, seemed to have the Sooners steadily improving, but the ship has sprung a leak as of late. OU has dropped three of their last four including their most recent debacle against Texas Tech in front of the home crowd.

Arguably, that’s not their most embarrassing defeat at Lloyd Noble this season. Instead, I’d give that honor to the overtime loss to Louisiana Tech in late December. Those Bulldogs had bite, except when they got waxed by 15 on a neutral floor against OSU.

The Sooners’ defense is regarded by many as the worst in the Big 12. Those that don’t regard them as such just haven’t seen them play, or have a kid on the team. One of those team dads will be calling the game, which means my poor mute button will be making excuses to the neighbors on Sunday.

Not only does this roster feature plenty of worthy booing candidates, it also features plenty of guys who should be around for seemingly an eternity.

The OU basketball jerseys aren’t anything special, but on most players they look official enough. Anytime a jersey hits Ryan Spangler, however, it immediately morphs into a cheap knockoff made by a company named Niko that’s embroiled in a legal battle with the NCAA. No one born after 1985 lived through a period when Spangler’s tattoos were considered acceptable, so he should have his eligibility retroactively exhausted to compensate.

Tyler Neal will hit at least one three on Saturday and it will be infuriating. He was much more fun when he had the Jew fro and didn’t even try to resemble a basketball player.

Cam Clark has waited three years to start living up to the hype he came to Norman with. The bizarro Markel Brown, Clark has seen his production steadily decrease since his freshman campaign. This season, he remembered that his major is human relations so he’d better get his basketball career in order.

The second best point guard recruit in the state in 2013 was Jordan Woodard. The top recruit can piss out of a moving vehicle, so Woodard must have been a distant second.

Buddy isn’t the only Sooner comfortable letting fly from all over the court. They’ve attempted and made more threes than any other Big 12 team during conference play.

They allow a better percentage to opponents from distance than they shoot themselves, however.

Add in that they have no one to protect the rim, evidenced by having fewer blocks in conference than all but one team, and you start to understand why this defense should be considered a hate crime in the once defensive minded state of Oklahoma.

The first meeting in Norman saw the Sooners connect on 8 of 17 threes and go to the line 42 times. It’s virtually impossible and statistically unlikely that a similar performance could happen again. Of course, virtual impossibilities are simplified by fans in various shades of red as “Sooner Magic”, which I believe refers to when Maury declares one of the alums as “not the father”.

I’ve lost a lot of faith in the Cowboys in the past couple of weeks. But, I can’t bear to pick against them in Bedlam.

I mean, Tyler Neal plays significant minutes for this team. Toby Keith is their version of Jeff Orr. In March, they’re lending their arena to George Lopez. I don’t care that this is basketball, that’s three egregious strikes.

The last time OSU played in GIA they exhibited heart and hustle that hadn’t been seen in weeks. Put that kind of effort in against the Sooners and the outcome will be different.

Would anyone be upset if we ran back screen alley oops every possession until Markel either dies from exhaustion or scores 100 points, whichever comes first? That would be a surefire way to make the lead story on SportsCenter. Not for the dunks, but for the fact that OSU ran an actual play.

I don’t know if anyone else has noticed, but the good guys haven’t won a game since this feature first appeared on PFB. So, you’re welcome for putting Travis Ford on the hot seat.

I’m riding with the Pokes in this one. If they lose, buy stock in Jim Beam.