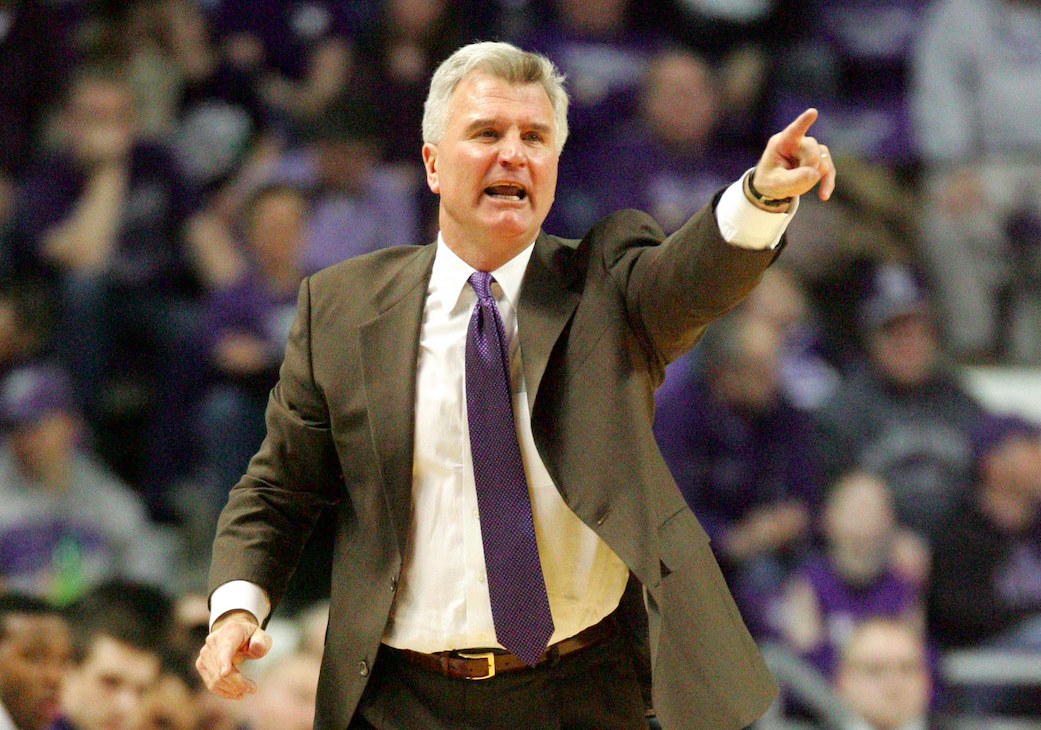 An overview of Kansas State hoops

EMAW. That’s where the insufferability stems from concerning Kansas State. For those of you fortunate enough to have kept your mind free of this poisonous drivel, EMAW stands for “Every Man A Wildcat.”

Clearly, the English department didn’t sign off on this open assault on the language.

Is it supposed to be an alert to every male in the area that a creature is near? “EVERY MAN! A WILDCAT!”

Is it a pioneer’s promise of what the prairie holds for each new homesteader? “Every man (gets) a wildcat.”

Is it a description of the fate that befell each member of a group of campers? “Every man? A wildcat.”

No. It’s just some short-sided individuals idea of a rallying cry that masks the fact that a team has never actually won anything. Allow me to help, Wildcat fans.

EMIAW: Every Man Is A Wildcat. Now we have a complete sentence with a verb and all the trimmings.

EMAWAW: Every Man And Woman Are Wildcats. Now we’re eliminating the sexism and really getting somewhere.

EMAWAWETWAFOOO: Every Man And Woman Are Wildcats Except Those Who Are Fans Of Our Opponents. Now that’s a rallying cry you can be proud of. When you scream it, you don’t have to be secretly ashamed at it’s nonsensical construction. Added bonus, Bramlage Colliseum will start to sound like a Zulu tribe gearing up for battle, which is nice.

With Wildcat gaffs in branding out of the way, we can move on to the fans themselves.

The last time K-State visited Stillwater was last year’s regular season finale. Crammed into an orange plastic seat into the stands that day was a particularly rotund fan dressed all in purple. With every made 3-pointer by the kitties that day, this gentlemen would raise his left hand high, hold up three fingers and shake his wrist as if he were trying to snake an imaginary drain.

This isn’t a cardinal sin of visiting fans, but as his hand danced, he’d turn around and look at the sea of orange behind him as if looking for approval that his fingers did in fact represent the same number of points just added to the scoreboard. Maybe he would’ve stopped if I’d slapped a giant gold star onto his forehead, but alas I had just exhausted my supply on my own shirt for holding in a barrage of fat jokes.

Listen, if you’d like to visit an opponent’s den and cheer for your team, so be it. But, the minute you turn around and try to get a reaction to your cheering is the minute those opposing fans are justified to start using their hate ray vision to bore holes in your face.

To make a long story short, K-State’s season has been a surprise. No one expected them to be decent after losing their entire offense, also known as Rodney McGruder.

Instead of being a free win, however, the Wildcats have been a tough out in Manhattan. They’ve lost only one home game this season. Granted, it was to Northern Colorado in the opener, but they’ve rebounded nicely. I mean, they basically had to if they didn’t want to forfeit the entire season.

The road for K-State, however, has been a different story. That story, in fact, has essentially been “The Road” by Cormac McCarthy. There’ve been few bright spots and plenty of grisly ugliness. At this point, facing cannibals would probably be less harrowing for the Wildcats than actually facing a Big 12 opponent in their home gym.

Bruce Weber’s squad is 5-7 away from the Little Apple this season. In conference, their only road conquests are at TCU, which is basically a spa day at this point, and at Texas Tech.

The win over Tech came about a week ago, however, and they followed that up with a big victory over Iowa State at home.

So, the moral of this story is unless you are content to be one of the Big 12’s bottom feeders, you should beat K-State on your home floor.

Considering this isn’t a team that anyone particularly fears matching up with, Kansas State has quite a few weapons at their disposal.

Marcus Foster is the first name on the scouting report. He’s K-State’s leading scorer, has been phenomenal for most of his freshman campaign and seemingly doesn’t have a glaring weakness in his game. I hope everyone is ready for Foster to be the next Big 12 player that seems to stick around for 9 years.

Thomas Gipson is big, wide and has been steadily improving since arriving in Manhattan. He’s basically the purple version of Rico Gathers of Baylor. So, I guess Gipson is the equivalent of McDonald’s Grimace, who was previously the only character who could be described as a “purple Rico Gathers”.

Will Spradling is getting by on reputation-alone at this point. He’s known as a great shooter, but the numbers suggest he’s actually fairly average. His skin has made steady improvements over the past few years, however, so at least his success rate with the ladies is likely better than this season’s three-point field goal rate.

One of the keys to OSU’s success against KU was their ability to get to the line and force turnovers.

Well, Kansas State is 9th in the conference in turnovers, averaging more than 12 per game.

They’ve also committed more fouls than anyone in conference play at over 22 per game.

These stats suggest that OSU will wear a hole in GIA’s white maple around each foul line and that Bruce Weber will be forced to field questions about his team’s turnovers during his halftime interview. If you’re wearing orange, these are both very good things.

While few teams shoot it well against K-State, their league leading defensive field goal percentage is much worse on the road. That’s evidenced by their latest trip to Oklahoma where the Sooners managed nearly 51 percent from the field in a romp.

Does anyone else feel a little odd about being confident and optimistic about this OSU team? You can always look at the roster and say that Markel, Marcus and Le’Bryan are perhaps the best trio in the country, but it’s been awhile since those three made you really believe with their on-court performance.

Let’s be honest. Kansas didn’t bring their A-game to Gallagher-Iba and the Cowboys’ defense didn’t have that much of a say in that. Even so, a win over the perennial conference champs does wonders for the confidence of both the players and the fans.

Could OSU stumble after such a big, relief-inducing win to a talented and hard-nosed K-State squad? Yes, without a doubt they could.

But, I prefer to believe that this team has taken on a Scrooge mentality. They’ve been reminded what they were and what they were capable of. They’ve seen the depths of their failures and where that course leads. Now, they’re motivated to ensure that the darkest timeline doesn’t play out.

I like Orange State to continue their resurgence in this one and set-up a monumental showdown in Ames to cap off this roller coaster ride, whose end hasn’t yet been determined.