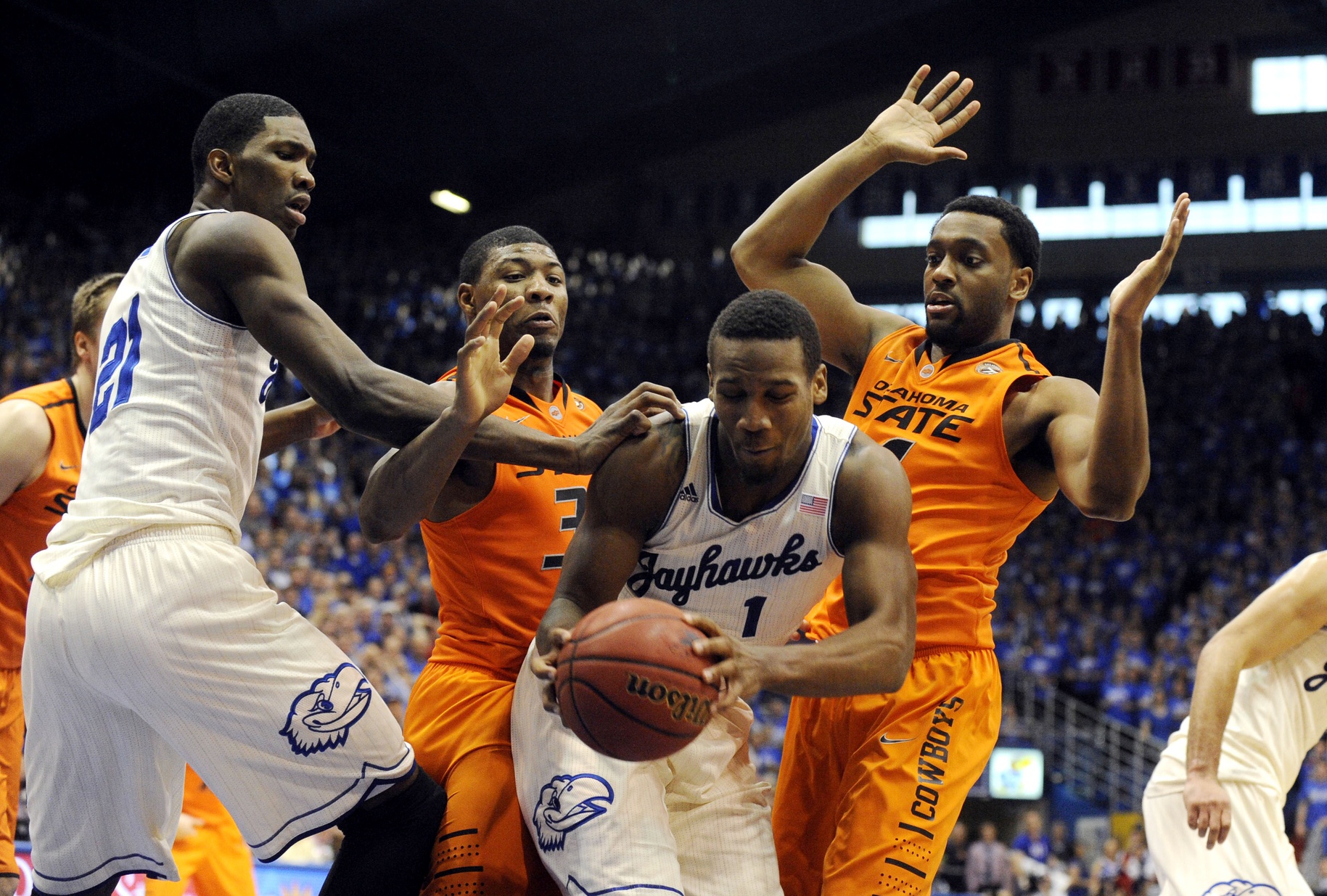 An overview of KU hoops

It’s difficult to insult the Jayhawks because anything you throw at them, they can just come back with “10 straight conference titles, Rock Chalk.” It’s that arrogance that makes them so insufferable. Well, that and of course the unending tradition of success.

It’s so fascist of them to not allow anyone else to ascend the rankings. Every other Big 12 team has been living under their regime for an entire decade. This is America. I demand a more democratic system. I’d settle for a socialist system where wealth is more evenly distributed. Specifically, the commodity of the best coach in the league. He needs to be shared with his alma mater.

Kansas basketball fans have been given the same reputation as Nebraska football fans. They’re regarded as intelligent, classy and gracious. Notice I didn’t say they earned this reputation.

I watched a Jayhawk fan erupt into a frenzied full body spasm at every single basket scored by the home team during OSU’s loss in Lawrence earlier this season. Usually, a performance like that in public would end with that young man being required by law to introduce himself to his neighbors. Instead, he was allowed to stay at the bar and continue not talking to any coeds.

Sure, every fan base has their embarrassments. (*waves) Even so, please spare us the holier than thou act.

KU didn’t invent basketball. They love to claim it because James Naismith started their program a full seven years after he invented the sport about 1,300 miles away.

Wait, does that mean that OSU invented science because Bill Nye gave a speech in Gallagher-Iba? I know Bill Nye didn’t invent science, but we don’t need to quibble over details when we’re adopting the Kansas tradition logic. Since George W. Bush also gave a speech in Stillwater, we can also claim the invention Texas, baseball and the U.S. government.

I’ll admit that Kansas has some nice traditions. My favorite being their tradition of early, embarrassing exits from the NCAA tournament. Can we stop savoring Phog Allen’s farts, though?

Kansas fans are the type that love to tell fans of “lesser, plebian basketball” about how they’re above storming the court. It’s no wonder when they’re forced to sit a full mile away.

The fieldhouse is also unplayable in the afternoon. Pay heed, all those that enter need sunglasses and SPF 45.

This game will be held in Stillwater, thankfully, which means GIA will be overrun with Kansas bandwagoners. The type of people who can tell you they cheer for OU in football and KU in basketball with a straight face. You know, morons. (*raises glass to Gene Wilder)

The Jayhawks have played, without a doubt, the toughest schedule in America. Ask any fan dressed in blue and crimson. They’ll be glad to tell you as soon as they finish talking about Naismith, Mario Chalmers, Danny Manning and how Joel Embiid is going to exhaust his eligibility because he loves being at Kansas so much.

That difficult schedule came with a few bumps. In the non-conference, they dropped one on their home floor to a very good San Diego State team and lost away from home to Villanova, Colorado and Florida.

In the Big 12, their only setbacks have been at Texas and at Kansas State. They did struggle in Lubbock, looked vulnerable against OU on Monday and only beat TCU by a combined 52-points over two games.

Currently, they’re riding a 4-game win streak and Bill Self is allowing himself to start looking at celebratory new hair pieces in anticipation of a big run in March.

If you’re a person who exists, then you’ve already heard too much about Andrew Wiggins and Joel Embiid. One has a broken jump shot, the other also has a broken jump shot and a flagrant disregard for goaltending rules (see below).That’s all I care to say about them, but Kansas fans will tell you that since they invented the sport, their players get to change the rules as they see fit.

The real engine that drives this team comes in the form of Naadir Tharpe. He’s quick, he’s got range, and according to his bio, he enjoys dipping his peanut butter sandwiches in milk. So he’s also a completely disgusting person. Who doesn’t love wet, soggy bread, said a sociopath.

Perry Ellis has always been underwhelming to me. He looked lost for most of his freshman season while playing sporadic minutes and shows the ability dominate games at times, but also disappears for long stretches. He’s probably worried that if he plays too hard and moves too fast, the rest of his hair will fall off. Don’t worry, Perry, Coach Self has a guy.

A less heralded recruit than classmate Wiggins and receiving less attention than Embiid, Wayne Selden, Jr., has proven to be a guy that’s good at almost everything. Thanks to KU’s website, I now know that he’s the son of Wayne Selden, Sr.

When you watch the Jayhawks play, they don’t seem to be a team that shoots it well from distance. They certainly don’t have one knockdown sniper that teams have to gameplan for.

Surprisingly, they still shoot it effectively. They’re about at the middle of the conference in three-point attempts, makes and percentage. That’s so shocking because Conner Frankamp is described as perhaps the best shooter on the squad and he’s been held to ten 3-point makes on the year. The bench has been doing most of the defending.

The M.O. at Kansas for seemingly ever has been depth and talent on the frontline. That’s no different this season as evidenced by a conference leading field goal percentage and incredible 56-percent mark on 2-pointers alone. They also lead the conference in free throws made and rebounds.

A team so successful in the paint shouldn’t have so much trouble eliminating offensive rebounds for their opponents, however. In conference play, they rank 6th in the league in opponent’s offensive boards giving up nearly 11 per game.

OSU must be allergic to Windex, unfortunately, because they’re among the league’s worst in rebounding their own misses.

The silver lining for the Cowboys comes in the turnover department. KU loves to give it up and has done so more than any other Big 12 team. The Cowboys love to take it away, and lead the conference in steals.

It’s not hard to see that OSU is playing better than they have in weeks. Even so, the Jayhawks have won the last two games they played in Stillwater, though it took two overtimes to do the job last season.

Since Smart and Forte got to campus, this matchup has produced consistent nail-biters, but two of those three battles have gone to the Jayhawks. Also, since conference play began this season, OSU has lost every close game that didn’t involve West Virginia.

Maybe they’ve turned a corner. Maybe Smart, Brown, Nash or Forte can summon a performance for the ages. Maybe Leyton Hammonds is ready for his coming out game. Maybe is about the best I can do when talking about the Pokes’ chances.

And, you know what?

Maybe is all I need.