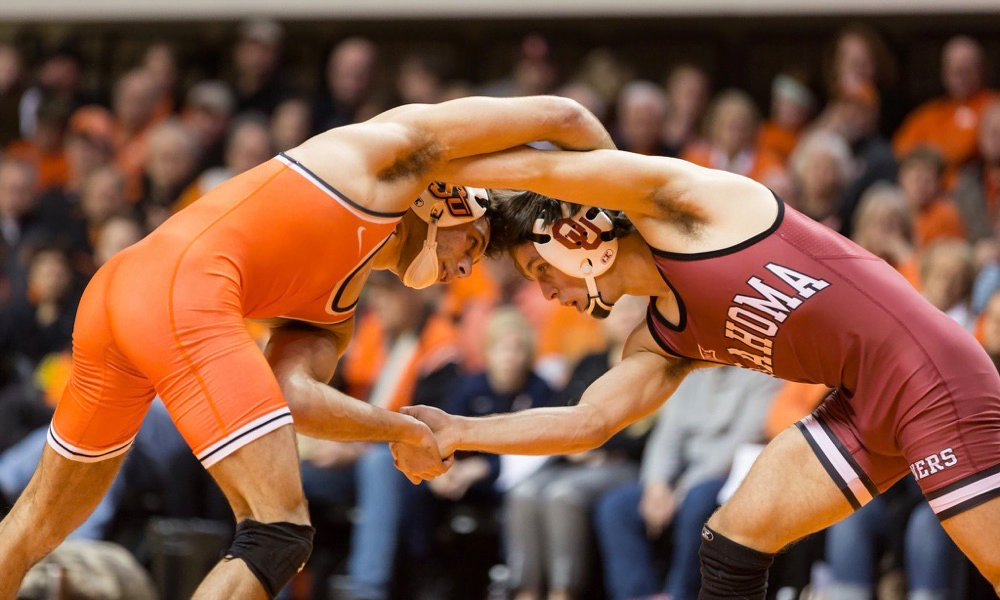 The Cowboys will be in action this weekend at the Big 12 Championships in Tulsa. The BOK Center will play host to the event, and the city is looking to make it a great experience for the teams and fans in an effort to play host to the NCAA Championships in the future. For Coach Smith, it is an opportunity to get his guys a little bit more experience before heading to nationals in two weeks.

“It’s nice.” Said Smith at his Tuesday press conference. “The conference allowing us to move it off campuses is something that I think was a good idea from the point of creating an atmosphere a little bit closer to nationals.”

In the past, the Big 12 Tournament was a must-watch for wrestling fans across the country. The conference boasts the three most successful programs in the history of the sport in Oklahoma State, Oklahoma, and Iowa State with support from great programs in Nebraska and Missouri.

When Nebraska and Missouri left, and with the departure of Cael Sanderson from Iowa State, the state of wrestling in the conference took a major hit. Oklahoma and Iowa State are not the dominant programs that they once were, and the conference replaced two power programs with an upstart in West Virginia.

The future of the conference, however, is very bright. Oklahoma coach Lou Rosselli is often cited as the reason Ohio State won a national title in 2015, and is one of the best technique coaches for heavyweights in the world.

Iowa State has let go of Kevin Jackson and hired Kevin Dresser from Virginia Tech. Dresser adopted a Virginia Tech program that was in a death spiral after Tom Brands left for Iowa, and has turned them into a perennial top 5 contender. South Dakota State, West Virginia, and Wyoming are all on the rise with great coaches (common theme is that they are all former Cowboy wrestlers).

In the 2016 NCAA tournament, the Big 12 qualified 41 wrestlers, 31 percent went on to become All Americans, and 53 percent made it to the Round of 12. The talent is there, and with the improvement in coaching this season it will only get better. Hopefully the Big 12 can continue to improve to the point to get on the Big 10’s level in the sport, which will help elevate Oklahoma State.

Nine of the ten Cowboy starters are slated in the one or two seed in their respective brackets, so nine of ten have a great chance to make it to the finals with the tenth also having a solid opportunity if he wrestles well.

No. 11 Nick Piccininni is the two seed at 125 pounds, and will face guys that he has defeated or can defeat in the first two rounds. In the finals, he will likely face No. 7 and top-seeded Josh Rodriguez of North Dakota State. The two have not wrestled this year, but have similar records against common opponents. A win against Rodriguez would help Picc’s stock going into Nationals.

No. 2 Kaid Brock is the two seed at 133 pounds. It is safe to assume that Brock will make it to the finals and get a rematch with the only wrestler that has defeated him this season in No. 5 Seth Gross of South Dakota State, the top seed in the weight.

No. 1 Dean Heil is the top seed at 141 pounds. Expect a rematch in the finals with No. 8 Bryce Meredith of Wyoming. These two are not strangers, and while Meredith has wrestled Heil well he has never been able to get an upper hand. This will be Heil’s third Big 12 championship with a win.

No. 2 Anthony Collica is the top seed at 149 pounds. Collica is looking to become the eighth Cowboy in program history to win four conference titles. With that significant of an accomplishment in front of him, expect Collica to make quick work of his opposition in this tournament.

No. 7 Joe Smith is the top seed at 157 pounds. Joe Smith is the only Cowboy wrestler that has not already qualified for the NCAA Tournament due to not wrestling in enough matches this year.

This means that Joe must be in the top 3 in the conference tournament to get a bid to Nationals. Fortunately for Joe, his road to the championship round should be easy for the sophomore from Stillwater. Smith is likely to face Clayton Ream of NDSU in the finals. The two have not met in competition before.

No. 7 Chandler Rogers is the top seed at 165 pounds. Chandler Rogers’ road to the finals at Big 12’s is not an easy road, as 165 may be the most loaded weight class of the tournament with five ranked wrestlers. If the seedings play out correctly, Rogers will have an opportunity to pin No. 13 Mejias of Oklahoma again.

No. 7 Kyle Crutchmer is the two seed at 174 pounds. Crutchmer won a Big 12 title in 2015, but sat the 2016 season out due to injury. Would be great to see the Cowboy senior from Tulsa take home his second title in front of the home town crowd.

No. 5 Nolan Boyd is the top seed at 184 pounds. Before his loss in the Penn State dual, Boyd had rattled off eight straight wins, six of those being bonus point victories mostly against Big 12 competition. Expect more of the same here for the Cowboy senior to pick up his third Big 12 title.

No. 9 Preston Weigel is the three seed at 197 pounds. The only Cowboy that is not the one or two seed faces stiff competition to win his first Big 12 title. No. 8 Nate Rotert, the only wrestler not named Cox, McCutcheon, or Pfarr to beat Weigel this season, will stand in Weigel’s way in the quarterfinals and No. 5 Jake Smith of West Virginia will be there in the finals if Weigel is able to get his redemption on Rotert.

It would be great to see Weigel, who seems to be in a slump lately, to show some toughness in this tournament. The Cowboy sophomore is well known as one of the strongest wrestlers in the sport and has the potential to be a very special talent over the next three seasons for the Pokes. His success will also be vital at nationals, where the Cowboys need him to get back to All-American status.

No. 6 Austin Schafer is the top seed at Heavyweight. Schafer has been phenomenal in his senior campaign with the Cowboys. The Edmond native does not need to wrestle, as he has already qualified and has been nursing a turf toe over the past few weeks, but Coach Smith thinks he will be a go this weekend.

All sessions can be viewed on FloWrestling, and the championship round will be televised on Fox Sports Oklahoma Sunday at 2pm. With the Kansas game on Saturday and this on Sunday, it will be a full weekend for Poke fans. Hopefully we can all walk into the office on Monday with our chests out.

You can see all of the brackets here. PFB will have a writer there covering the event.