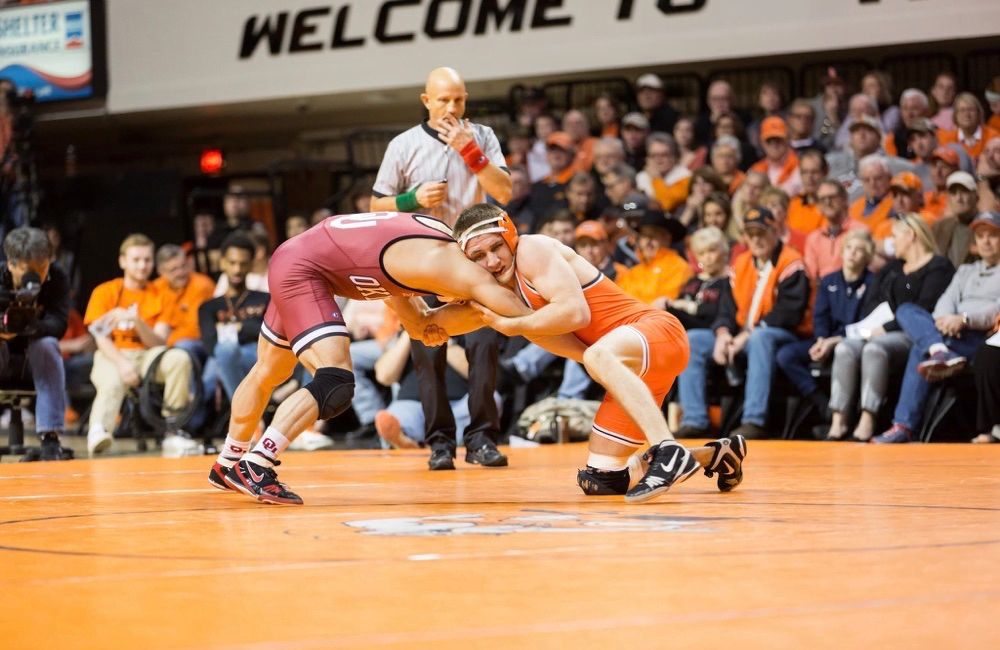 Imagine condensing the NCAA Basketball Tournament, March Madness, into a single weekend in a single venue. The venue could be any Final Four venue over the past several years, a football stadium with 6 courts laid out across the field.

Math checks out on this, as 6 basketball courts could easily fit within the dimensions of a football field. Think of the roller coaster of emotions for the spectators. Think of the sheer chaos of this kind of event.

This kind of event exists. It is called the NCAA Wrestling Tournament, and Oklahoma State has won more of these tournaments over the past 87 years than any other program.

Penn State has won five of the last six NCAA championships, and after their dominating win over Oklahoma State in the NWCA Dual Championship is the favorite to capture their sixth championship in the Cael Sanderson era.

An injury to star freshman Nick Suriano, however, set Penn State back at the Big 10 championship tournament. Penn State also saw no production from their wrestlers at 133 pounds and 141 pounds, leading to an Ohio State win at the Big 10s, and leaving the window open for both Ohio State and Oklahoma State to win the NCAA Tournament.

“The route for us to win the championship is going to be 10 guys. I don’t think 7 or 6 will get it done for us. What we’ve got going in is 10 guys ranked in the top 12.” OSU Coach John Smith told Kyle Fredrickson of the Oklahoman on Monday evening. “If we can get 10 of them scoring points, which we might be the only team that has that, that’s what’s going to win us the championship.”

Coach Smith raises an excellent point here. Nationally, most wrestling pundits are considering that Penn State is the favorite, and rightfully so!

Zain Retherford, Jason Nolf, and Bo Nickal are all super stars that scored enough bonus points last season to come in eighth place in the team race on their own. There is also a great supporting cast behind those three that are capable of achieving All-American status in their own right. However, with Suriano hobbled by what appears to be a high ankle sprain, it is difficult to speculate that they will receive any points from 125, 133, or 141.

There is also precedent for having 10 All-American wrestlers being a great path to the championship. In 2001, Minnesota won the championship with 138.5 total team points on the back of 10 wrestlers placing in the top 8. Not a single Minnesota wrestler was an individual champion that season; none even wrestled in the finals!

This season, only Chandler Rogers is seeded outside of the top 8 and could easily wrestle himself to All-American status. Penn State’s all-stars may rack up a lot of bonus points, but it will be hard to overcome having no production at three different weight classes when the Cowboys have three wrestlers that should be finalists and five more that should All-American.

Listen, I will not deny that I am an Oklahoma State homer and an optimist (much to the chagrin of my boss, who wants my sales projections for my team to be accurate, not hopeful).

I thought for sure that Coach Gundy would lead us back to the Sugar Bowl this season, even after the Central Michigan and Baylor loses. I have Brad Underwood’s squad in the Sweet 16 in every single bracket that I have created. I even stated that I will name my first born son “Brad” if this dream turns into a reality. If you want objectivity, find your wrestling coverage from somebody else! (Please don’t… I enjoy doing this).

Below are my predictions for how this weekend will shake out. Pokes highlighted.

This works out to 143 team points for the Pokes on placement alone. This does not take into account that Dean Heil started pinning guys at the Big 12 tournament, or that Chandler Rogers is capable of putting just about anybody on their back.

This weekend will be exciting. In spite of coming up short the last several years, the Pokes have a real shot at bringing home number 35 on Saturday night.

All of the matches will be broadcast on ESPN, and I will be providing live coverage on Twitter @leecothran.