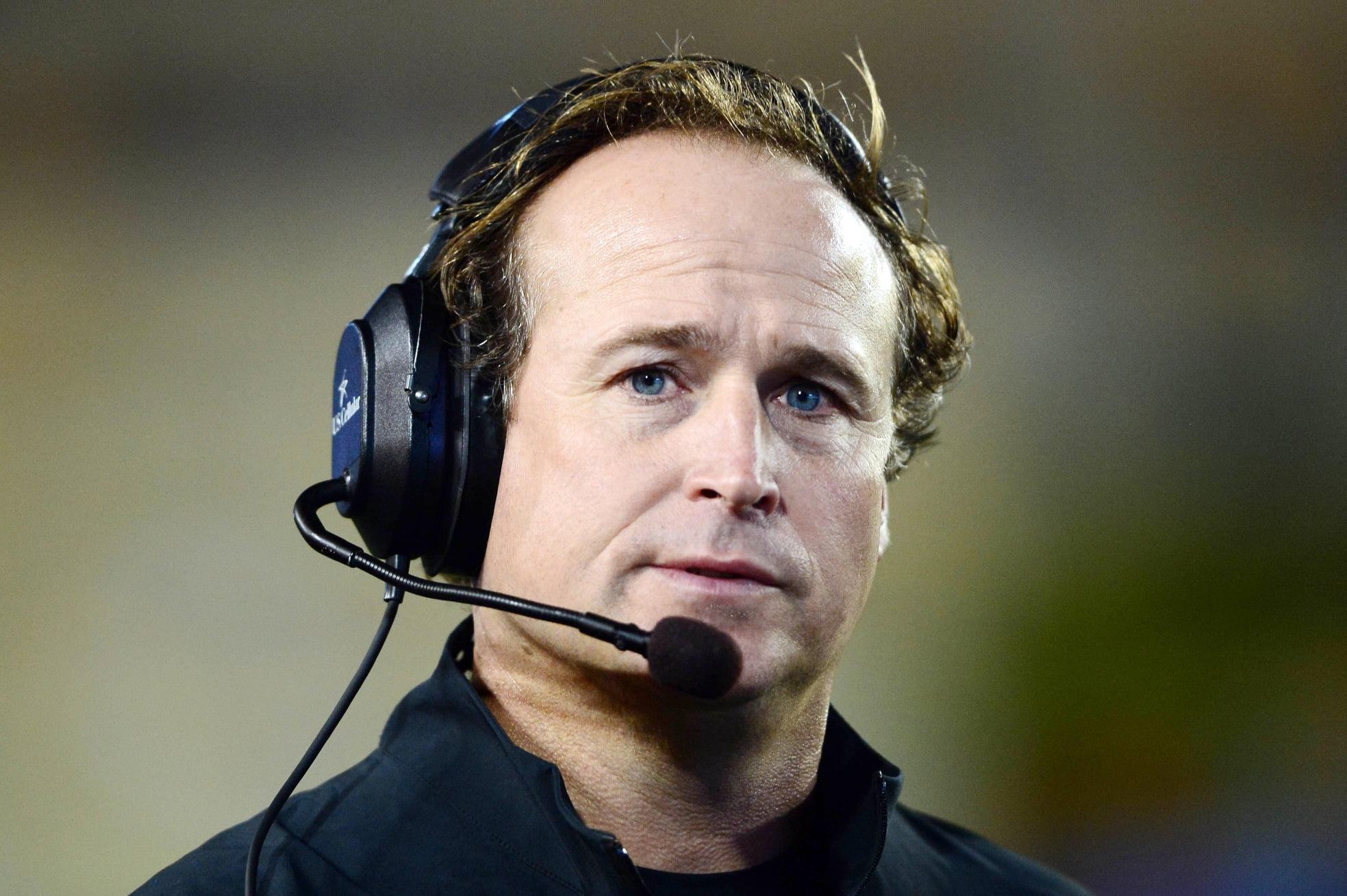 Sorry everyone. That was probably the meanest thing I’ve ever done. Mike Yurcich didn’t evaporate into the atmosphere to make questionable play calls for the Ozone.[1. Side note: Did you know OU has a bursar type office called the oZONE? They’re the worst.]

The Mountaineers have had Rich Rodriguez and Dana installing innovative, groundbreaking offensive schemes while their fans stumble out of the stadium and into the hills to darn their own socks. Quite the dichotomy they have in Morgantown.

They also have the ability to score a lot of points, so that’s a bummer.

Nobody misses Holgy at OSU more than me. I miss the crossing routes, the unpredictable flea flickers and the genesis of plays that the rest of the nation would soon adopt. But what I miss most is the double barrelled, ref-abuse spewing plasma guns of Gundy and his OC.

Dana gets fired up at the drop of a hat [1. That signifies a player went out of bounds so this is a very clever joke you aren’t appreciating enough] and Gundy seemed to be fueled by the Holgy hulk outs.

Since Yurcich has come to town, Gundy has taken on more of a calm, apathetic demeanor that just doesn’t cut it. I’m not saying a dangerous caffeine addiction and terrible hair cut would make our current coordinator into a defense devouring machine, but it couldn’t hurt to try because, um, nothing else has worked.

As for the Mountaineers, or ‘Neers, or ‘Eers, or Veers, which Matthew Mcconaughey taught me is an offensive style that originated at WVU…or was popularized there…or murdered there. I’m not sure I fell asleep pretty early on.

I do know that Bobby Bowden used to coach in Morgantown before blasting into superstardom with the Seminoles. Nicholas Lou Saban Jr. was also born in the mountain state, which probably explains the middle name ‘Lou’. He eschewed his home state’s largest public institution for Kent State, however.

By the way, nothing says ‘literally anything is better than WVU’ than voluntarily going to Kent State in the early 70s instead.

The state also looks like a diseased liver, which makes sense considering their unofficial state song is a prayer for the country roads to guide the drunken residents home instead of those dirty city roads that guide them into the ditch and county lock-up.

Clint Trickett, senior QB. All these years after losing Bowden to Tallahassee, Florida State finally sent something back. Trickett is a pocket passer, which in this case means he actually fits in your pocket. I realize he’s not that short, he’s just slight. He gets blown over when Holgy screams at him.

Kevin White, senior WR. This transfer student has burst onto the scene and is making a case for the Biletnikoff award. He transferred from Lackawanna College, which is why most coaches passed on him. I prefer my recruits to have Lotsawanna.

Injuries, the great equalizer. The Mountaineers leading rusher and arguably their best defensive back are questionable for Saturday. You certainly can’t root for injuries, but these injuries already happened. It’s probably fine if you want to root for one more week of rest for the young scholars.

The West Virginia state motto is “Montani semper liberi” because I’m sure there are lots of West Virginians who speak Latin. It translates, however, to “Mountaineers are always free”, which seems ominous.

Cut to an exasperated John Holcomb late in the 3rd quarter:

“I don’t know how to explain it, Dave. Mountaineers are always free. That’s Kevin White’s 3rd touchdown on the day.”

There have been plenty of free runs through the OSU secondary as of late and now we go up against a coach who specializes in exploiting weaknesses in defenses and a WR and QB capable of making good secondaries look foolish.

The WVU defense has been better than average in many instances this year also. And I don’t mean in the same way that a girl in a Morgantown bar is “better than average” because she’s conscious and not related to you. That’d be called a West Virginia 10.

It’s Homecoming! OSU never loses during the world’s biggest homecoming celebration. Except for all of those times.

I will say, a talented, Holgorsen led WVU squad came into Stillwater before and looked sub-par against the Cowboys. If Tavon and Stedman and Geno could get shut down, maybe Kevin and Mario and Clint can too.

Gundy has always found a way to improve his teams as the year progresses, so this could be week one of a steady upturn.

Boone Pickens said he had a big surprise to unveil. I realize he did that officially, but maybe he also gave Glenn Spencer the Mountaineers’ play sheet and highlighted the best ideas for Yurcich to use with the Freek.