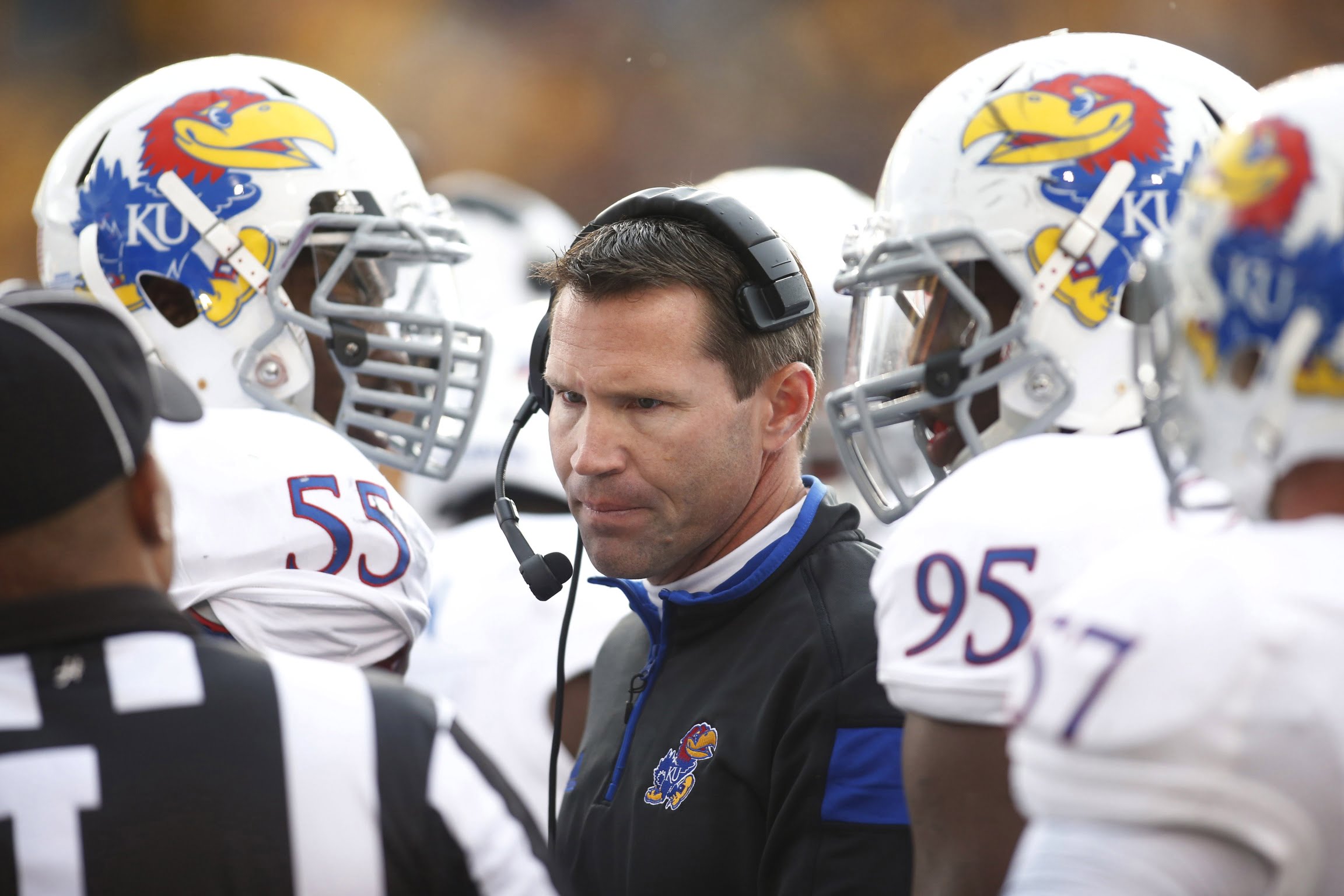 It’s going to be another long season for Kansas (USATSI)

Oh Kansas football. It’s the anecdotal proof that the universe must always have balance. Want to win 10 straight basketball conference titles? Your football team is going to foot that bill.

The fallout of that deal with the devil is Memorial Stadium earning its name every two or three years. This season, Kansas football claimed another victim, which means OSU will be hosted at Charlie Weis Memorial Stadium this Saturday.

The Jayhawks’ ineptitude has conditioned the students to support the team by no longer attending games. While hosting Texas two weeks ago, the game that proved to be the final nail in Weis’s XXL coffin, students decided witnessing yet another loss was a poor excuse to miss out on three hours of prime Saturday drinking time. They should add that to their university commercial.

“The University of Kansas, number one in time management.”

Now it’s former defensive coordinator Clint Bowen’s turn to run out the clock on this season while he peruses Monster.com on the sideline. He may even conduct phone interviews on his headset. Again, that’s just good time management.

What do we know about Bowen? According to Wikipedia, he’s an American football coach, which is an important distinction that previous Kansas coaches may not have earned. He’s a local boy who played a Kansas and has spent most of his career patrolling the sidelines and press box in Lawrence.

This makes him an ideal candidate for the job considering he’s obviously an old pro at zoning out during bad football games. While suckers like Mike Gundy are having to stress over every detail, Bowen can formulate a plan for where to meet Bill Self and his entourage on Mass St. after the game.

The moral of this story is that almost anything is a better use of time than Kansas football. Just ask the smartest man in Lawrence, Kevin Short. The cornerback cut his losses and bailed on this team in early September and his life is richer because of that decision.

Most likely, your life won’t be richer for watching what’s either going to be a blowout or a contest so ugly, it would make last week’s first half against Iowa State look like Miss America at sunset in front of a waterfall.

Playing at Kansas is like playing in a sewer. You’ll almost definitely survive but you’ll never understand why you did that in the first place.

The unnamed QB1. What better time than after the 5th game of the season to open up the QB competition. Montell Cozart has started each game so far and performed up to Jayhawk standards. That means he’s completed less than half of his passes and thrown more interceptions than touchdowns. Mike Cummings could be the next man up and since he’s already completing less than half of his passes in limited duty, he seems poised to grab the reins.

Corey Avery and De’Andre Mann, running backs. Their alternate position is listed as ‘offensive bright spots’. Avery, a true freshman, leads the team in rushing and total touchdowns. Mann averages better than 6 yards per touch. These two have been pretty good this season, but perception might be skewed by the fact that most of their plays don’t involve a KU quarterback trying to throw the ball.

The defense. Another group managing their time wisely. They only defend 69 plays per game because they give up more than 6 yards per play. That’s working smarter, not harder. There’s not really one individual to single out here, but they’re all true American heroes in my book.

They just beat West Virginia for a half. You might say Clint Bowen is 0-1 in his head coaching career, but I say he’s got one half won, one half lost.

Still, coaching changes have been known to inject life into teams. I’m not sure if that applies to teams that are already legally dead.

It is Daxx’s first game action away from Stillwater, however. Let’s imagine that the OSU run game continues to be stuck in the mud and Daxx doesn’t recover from another first half interception party. Even against Kansas, that all too possible scenario is worrisome.

They’re better at every position, their coach has actually won a game, they may even have more fans in the stands.

At the current position of these two programs. an OSU loss to KU is unacceptable. Whether you’re playing at home, on the road, on the moon or even in Montell Cozart’s mind.

It is, however, an opportunity for youth to gain experience and for a struggling O-line to grow as a unit. There’s a chance growth in the KU game sets the table for a strong finish when the schedule gets tougher. So, maybe, just maybe, a game against Kansas isn’t the worst way to spend your time.