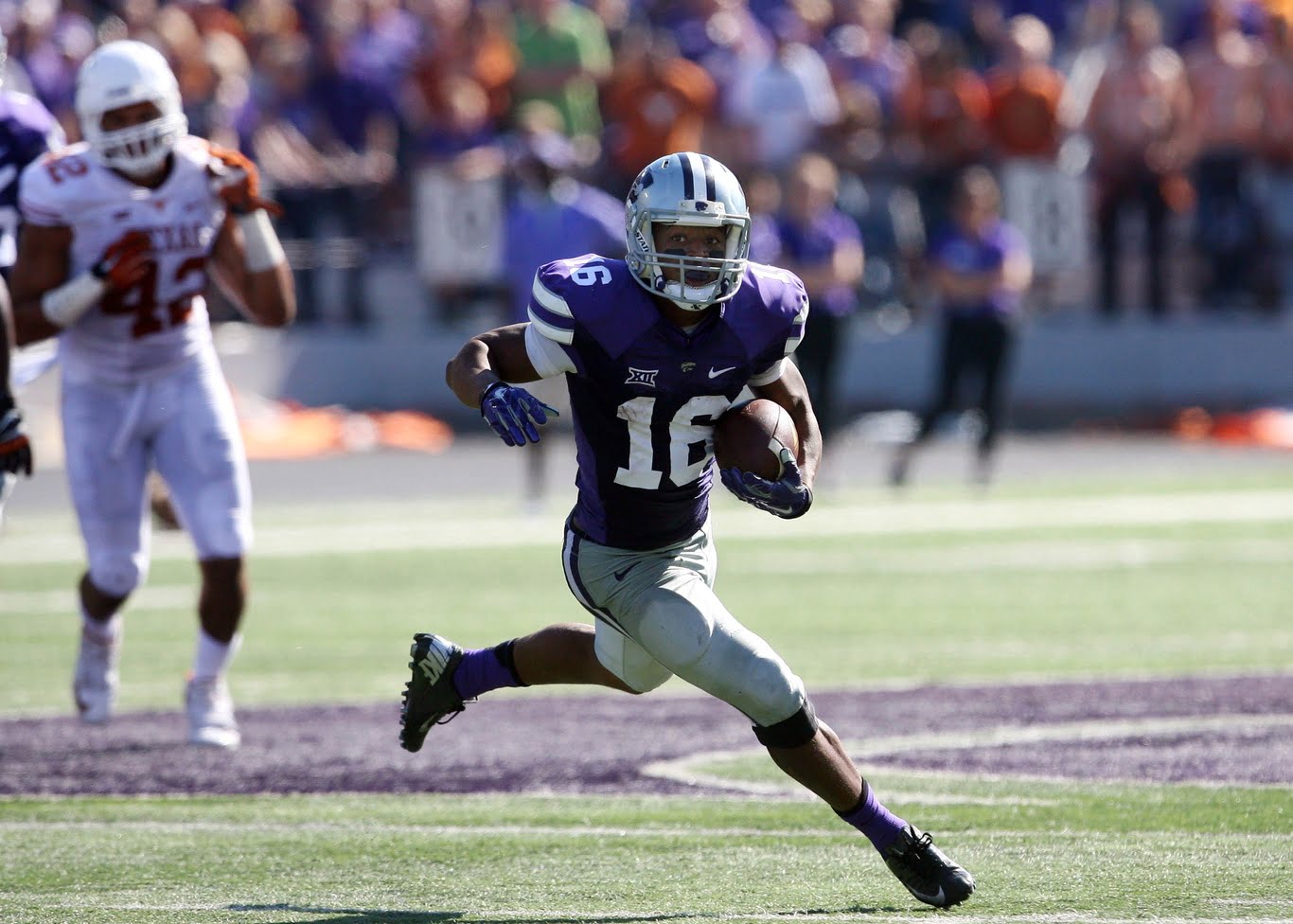 Can Tyler Lockett be stopped? (USATSI)

Good news, everyone! That ABC primetime broadcast is regional, not national. I’m not saying the Pokes can’t shock the world, but just in case they don’t, it’s nice to know that the entire country won’t be watching us get embarrassed.

There’s always a lot of talk about the influence of the crowd when you take the trip north to the Little Apple, but the real X-factor is the wind. The wind in Manhattan wears purple. It isn’t the 12th man; it’s the 6th and 7th on defense.

In 2002, Kansas State tried to kick it deep, but the wind decided it was an ideal time for an onside attempt. Apparently the wind is a better tactician than Bill Snyder has even dreamed of being.

You know those sports movies where a ghost or angel invisibly controls the ball? If not, ask Travis Ford. He’s an expert. Well, that’s what playing Kansas State is like.

Playing K-State is also like taking on your wily grandfather. Your gut is to take it easy on him, but the moment you do, he’s building hotels on Boardwalk. And you thought you were playing checkers.

The Wildcats playbook is filled with the type of plays that delusional fans would come up with, except they work.

“Hey, what if we threw it when we ran a QB draw? All the receivers are wide open!”

The downside of that is you can’t shake your head and chuckle to yourself when purple-clad fans exclaim after a play that they should’ve thrown it on that designed run because no one covered a receiver. The next play, that designed run turns into a pass.

I don’t know what’s going to happen, but you can count on a few things when your team takes on the great white wizard.

The announcers will gleefully point out that Snyder’s teams “don’t beat themselves”.

The wind will blow in the opposite direction of your offense.

I’m assuming you’re already familiar with senior QB Jake Waters, who in one season went from sharing time with a running quarterback, to being the best dual threat QB in the conference.

You probably also know the continuation of the biggest recruiting mistake OU and OSU has ever made. Tyler Lockett is once again an electric playmaker much like a couple other K-State receivers whose name escapes me. So let’s dig a little deeper.

Glenn Gronkowski, el esta fiesta! Gronk’s little brother hasn’t been the unstoppable force his brother has turned into, but he is a decent tight end.

That means he has all the ingredients needed to wreak havoc on the Cowboys. Fairly average player that announcers will fall in love with every time they make a play. Prepare for the Gronkining.

Joe Hubener, QB 2. He’s thrown 6 passes this season. Can he double that number on Saturday? He has three younger brothers, which means he’ll not only plague OSU for the next couple of years, but his brothers will be superstars too.

The Wind, gamechanger. Have I beaten this point into the ground yet? No I haven’t. I tried but the wind took it and returned it for a touchdown. Wow, that joke really blew…GET IT? WIND!

Because the first three letters of ‘wind’ are ‘WIN’.

OK, seriously if you’re reading this section legitimately this might be the first football game you’ve ever watched. So, welcome!

Kansas State might win because they are well coached and quite talented. They’re good at running, good at catching, good at tackling and those are all essential skills required in this sport.

They’re also playing in front of their home crowd, which tends to make a difference. For these reasons and more, K-State is likely to win.

By win, I mean score more points. Even so, you’re really in for a treat. I hope this first experience doesn’t spoil football for you forever. It’s really a very entertaining sport.

OK then, let’s get started.

In all seriousness, even though I do think OSU getting a win on Saturday would be as surprising as the basketball team winning the conference, I do think there are some fairly realistic ways it could happen.

While the Wildcats have a disciplined defense, I’m not sure that they have any unbelievable athletes. They’re more sound than spectacular.

And while the coaching staff will surely gameplan for Tyreek Hill, sometimes freaks or freeks defy schemes. If the Freek finally gets fully unleashed, maybe he’d be enough, along with an inspired effort from the defense, to win the day.

I make jokes because otherwise the recent results hurt too much, but I do expect this team to continue to grow up and put together a couple surprising performances before the end of the year.

It may not be this weekend, but you’ve got to believe there’s one or two wins left on the schedule. No really. You have to. Otherwise, it’s basketball season.