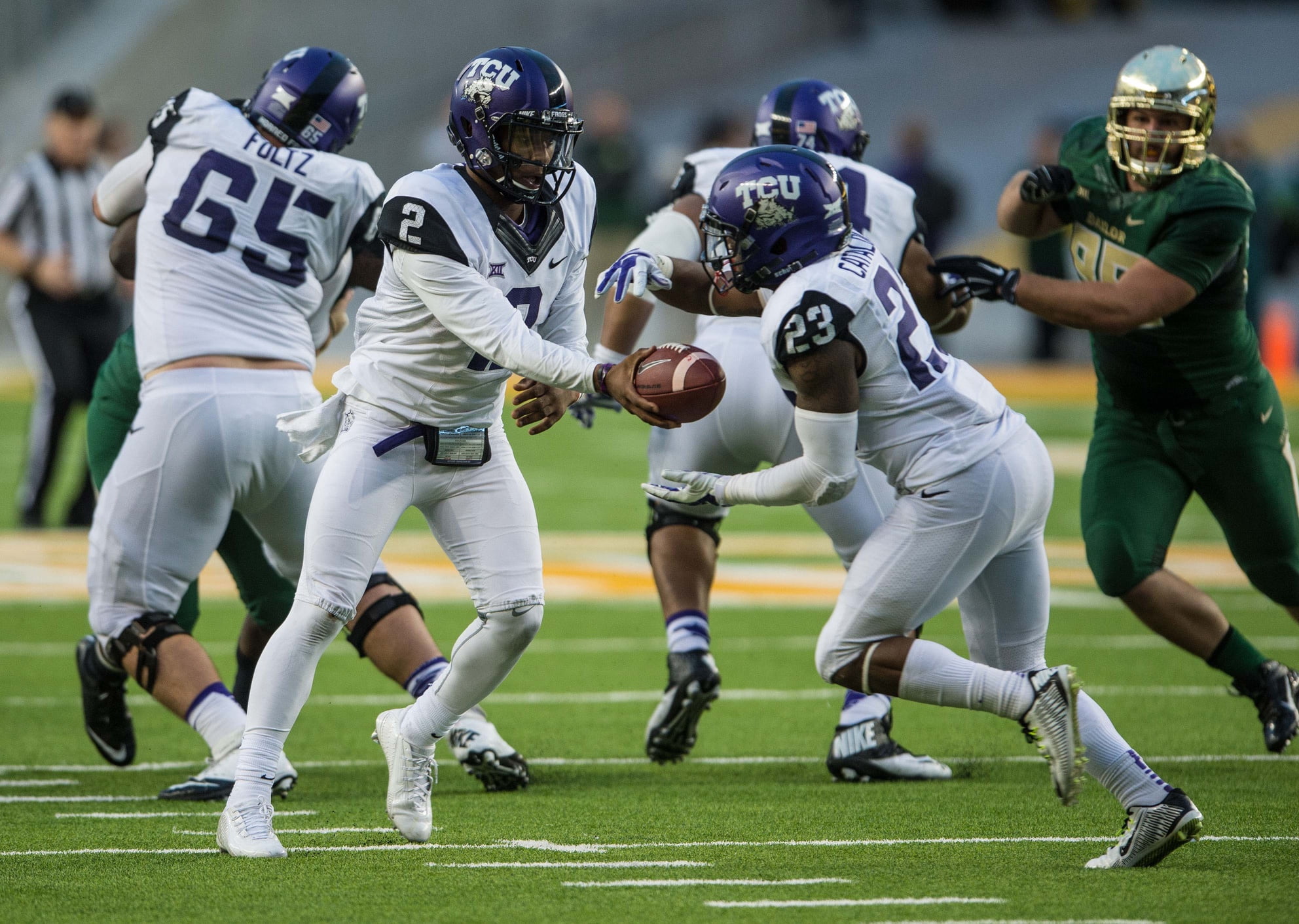 There’s not much history to speak of between these two teams. We’re sure that TCU is an official part of the Big 12 now? Sure, next thing you’ll tell me is that Rutgers is in the Big 10.

The all-time series sits at 13-9-2 with the Cowboys in the lead. OSU hasn’t made the trip to Fort Worth since 1992, however.

Do you remember what you were doing in 1992?

I was wondering aloud about how useful this cursive writing business could really be and setting records that may never be broken in Nerf basketball.

Meanwhile, the OSU football team was trying in vain to understand the ramblings of Coach Pat Jones and playing OU to a 15-15 tie. Unfortunately they lost to TCU while looking ahead to a big meeting with Nebraska, which they lost in a nailbiter 55-0.

What sticks out about TCU is the memory of LaDainian Tomlinson’s legend and Andy Dalton’s Rose Bowl trip. I think they also had a wide receiver named Skye for a while.

Texas Christian University was established in 1873 in part by a man named Addison. His brother was the cofounder, but shockingly wasn’t named Braxton or Cayden.

As if that wasn’t all you’d need to know about this school, it actually gets worse.

Rather than positioning their campus adjacent to a vice district lovingly called “Hell’s Half Acre”, which sounds like a less rowdy version of The Strip, Addison and his brother (Aiden probably) thought Waco seemed like an attractive place to voluntarily move to.

Their most famous alumni are fictional characters Rev. Lovejoy from The Simpsons and The Professor from Gilligan’s Island.

None of that is particularly relevant to their football team, however. Coach Gary Patterson has been at the helm since 2000.

If you’re unfamiliar with Coach Patterson, just put a visor and glasses on a dorm fridge and introduce yourself. Be careful though because the fridge will scream at you until it loses its voice. Then it will keep screaming at you, but it will be more hilarious.

The most interesting storylines surrounding Patterson’s team recently has been a pinball game loss to Baylor and that their starting QB didn’t hurt his wrist. So, basically everything you’d expect from a football team representing a university started by an Addison.

The OSU coaching staff should have named JW Walsh the starter briefly just to keep up. Also of note, there are no ‘Y’s in Boykin’s first name, which doesn’t pass the eye test.

Paul Dawson, senior LB. This former JUCO transfer has become the leader of a defense that leads the Big 12 in sacks. He himself leads the league in tackles per game. That’s a lot of leadership. I don’t have a joke here, Dawson is just really good. Wocka wocka?

Jaden Oberkrom, junior kicker. He hadn’t ever missed an extra point until the Oklahoma game this year, which coincided with a slump that also saw him go 1-4 on field goals. He may have broken out of that when he drilled all 10 kicking attempts against Baylor. Or, maybe that was just the eye of the storm for Jaden. I’m not sure what that means.

Trevone Boykin has grown into one of the best QBs in the league, which admittedly is running low on quarterback talent. Boykin has taken to TCU’s adoption of the spread offense installed by former OSU staffer Doug Meacham while Patterson has rolled out another sound defensive group.

Yes, they’re probably sound despite what you saw at Baylor.

Boykin leads the team in rushing, but B.J. Catalon is a capable back. They’ve also got a handful of skilled targets in the passing game.

The Frogs already beat OU in Fort Worth, which announced their presence in this year’s Big 12 race. The loss last week knocked them down a peg, but this is still the best team by far OSU has seen since week 1 with the obvious exception of that buzzsaw encountered in Lawrence last week.

The offense TCU will run on Saturday is the same offense the Cowboys’ defense has been facing every day. There’s a familiarity that coach Spencer is probably excited to exploit. While there’s not a Trevone Boykin on the practice field in Stillwater, an intimate knowledge of the opposing offense and their play caller has to count for something.

There’s also the possibility that TCU’s defense was just an early season mirage. After allowing only 21 point through their first three games, the Horned Frogs have been lit up for 94 in their past two.

Even the most orange-blooded OSU fan wouldn’t make the case that the O-State offense is on par with Baylor’s, but the same Sooner offense that moved the ball against Texas like an elderly man shopping for cereal was able to put 31 on TCU.

I don’t know that 31 is going to be enough for the good guys to win this one, but I’ve also given up trying to predict how the offense will perform.