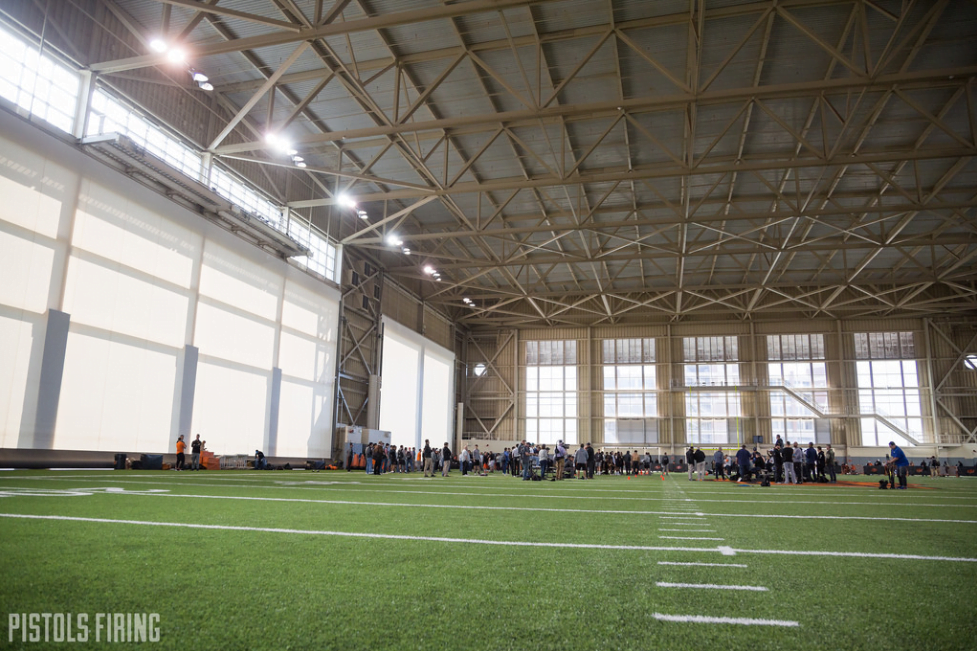 Oklahoma State’s spring practice kicked off on Monday, but on Tuesday players and coaches enjoyed a quick reprieve while a handful of former Pokes showcased their talents for scouts and representative from all 32 NFL teams inside Sherman E. Smith Training Center.

All in all, there were 15 members of last year’s team that took some part in OSU’s pro day on Tuesday. Let’s take a look at some of the highlights and noteworthy happenings.

OSU’s No. 2 receiver did not earn an invite to the NFL Draft Combine, but he made the most of his chance to perform in front of scouts.

Tyron was clocked at 4.34 seconds on his best run which would have ranked fifth among wideouts in Indianapolis last week and sixth overall at the combine.

Tyron also got some final work in with his former quarterback for the scouts.

And Tyron showed out with 15 bench press reps

“I thought he’d get like 10,” said the NFL scout standing beside me.

“I felt great,” said Johnson after his pro day. “I came out here, I think I put on a show. I did what’s expected of me. I feel like I came out and got the job done.”

Taylor Cornelius Has Some Ups

Who knew that Oklahoma State’s departing QB1 could jump out of the gym?

#OKState QB Taylor Cornelius with an impressive 38-inch vertical. Best from a QB at the combine was 34.5.

That would have been the highest vertical leap by a quarterback at this year’s combine by four inches and the fourth-highest at the combine since 2000, and highest ever for someone his height.

Here are the QBs that have jumped higher at the combine.

“That was awesome,” said Cornelius. “That was my first time hitting 38 inches. I’d been close to that a couple times, but it was great to max out today.”

38!
How legendary would this guy have been if he’d attended Boynton’s open tryout and been added to the squad? https://t.co/AFlgMM3Z3S

Cornelius also showed off his wheels with a very respectable unofficial 40 time that was in the 4.58 to 4.65 range. This year’s fastest QB at the combine was Penn State’s Trace McSorley who ran an official 4.57.

Cornelius wasn’t the only one to showcase his hops. Defensive end Jarrell Owens — who played at 6-3 and 265 pounds as a senior — can get up.

At #OKState’s Pro Day. At a distance, but believe we just watched DE Jarrell Owens register a 39-inch vertical. Top vertical among ends at the combine was 40.

Owens impressed with his 40 time, as well. A 4.6 40 would have come in second among D-linemen at the combine.

Estimations put Tyron Johnson in or just below the 4.4 range on the 40, Jarrell Owens around the 4.6 range #OKState

After an impressive 40 time (4.65 seconds), 22 grown-man reps on the bench press and 37.5-inch vertical at the combine, OSU’s 2018 sack leader checked the remaining boxes for NFL talent evaluators by turning in a 4.14 in the 5-10-5 shuttle in Stillwater, according to GoPokes.

Brailford admitted that he was nervous on Tuesday, but it was nothing compared to the nerves he felt at the combine.

“I think I’ve proven that I can move and that I’m versatile,” said Brailford. “We’ll see how teams view me in the coming weeks.”

• Here’s a full list of all 15 Cowboys who took part in some phase on Tuesday.

• Justice Hill met with teams on Tuesday but chose not to partake in any drills or exhibitions. Can you blame him? He already lit it up in Indy. Sione Finefeuiaki also did not test.

• Kenneth Edison-McGruder’s 23 reps on the bench would have led all safeties in Indy.

• Former Cowboy wideout Josh Stewart, who recently took steps to try to revive his pro career, was also on hand.