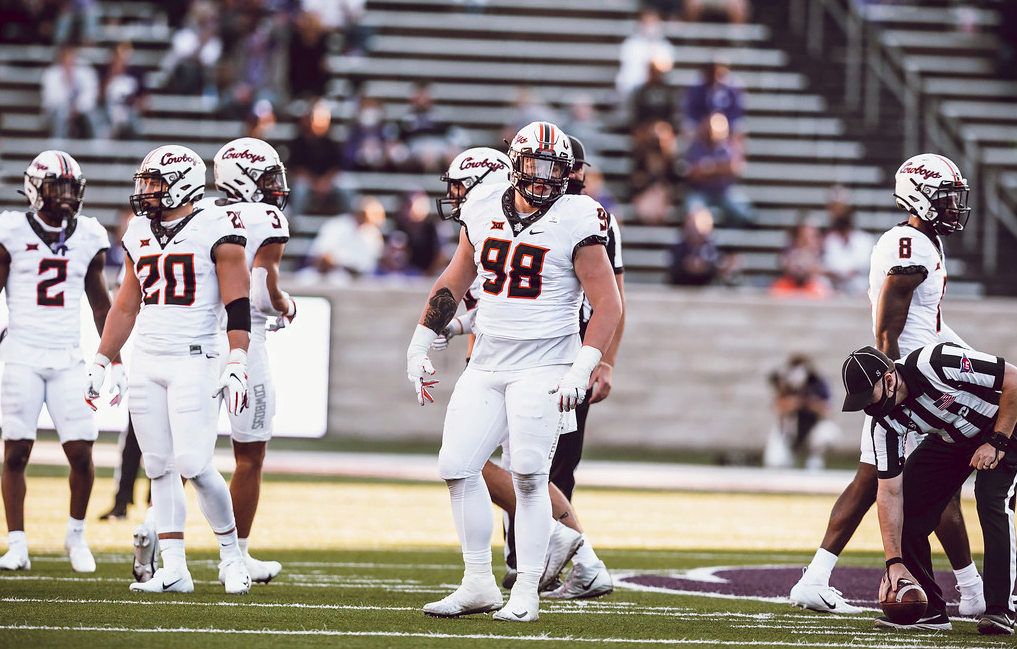 Oklahoma State released its spring football roster this week, so on Wednesday I did my best Marshall Scott impersonation by projecting how the depth chart on offense looks like heading into the spring and how it might look come fall. Today, as promised, we’re back with a look at how things might shake out on defense.

A quick note: Classifications reflect what Oklahoma State lists on its online roster.

Safety thoughts: Pretty clear who will be repping OSU’s back line. Two-time all-conference stud Kolby Harvell-Peel put his draft dreams on hold and should be slotted as a starter. And Tre Sterling, fresh off a stunning snub as an All-Big 12 performer, should be penciled in as well. Corner-turned-safety Tanner McCalister should also be in line to reassume his role. The big question comes on the second unit where OSU has a ton of depth between up-and-comer Nick Session and grizzled redshirt junior vets Sean Michael Flanagan and Kanion Williams. Hilarious how talented this unit is.

CB thoughts: Missouri transfer Christian Holmes opting to take the extra year of eligibility and returning to OSU all but guaranteed he’d be a first-teamer in 2021 in place of outgoing starter Rodarius Williams. So with Jarrick Bernard-Converse returning, it gives OSU a quality vet to pair next to a returning, proven starter. Their backups are young and somewhat inexperienced, but there’s plenty of juice between Jabbar Muhammad, Korie Black, Demarco Jones, Jordan Reagan and Gabe Lemons. Very much like the direction of this position group and the youth being groomed to eventually take over.

LB thoughts: Both Malcolm Rodriguez and Devin Harper opting to return should cement them as starters, with Rodriguez resuming his starting role and Harper slotting in as LB1 where Amen Ogbongbemiga’s absence opened a spot. Pretty interesting race for second-rotation roles, though. Mason Cobb looked like a stud last season in limited usage as a true frosh, and Lamont Bishop, a junior college add, appeared to be in line for a role last season before missing most of the season. Then there’s the young guns between Dizadare and Farrar, both of whom I have long been very high on, as well as the redshirt Oklahoma-grown freshmen in Roberson and Thompson.

DE thoughts: The big question here is just how healthy Trace Ford will be. He suffered a nasty injury in mid-December against Baylor, a sequence that ended with Mike Gundy appearing to express concern over the stability of his ACL. And Scott Wright of The Oklahoman reported earlier this month that he underwent surgery shortly thereafter, though it’s unclear the exact nature of the injury.

Defensive end Trace Ford, one of the Cowboys’ most dynamic defenders, lay on the ground in obvious pain with what turned out to be a serious knee injury. He underwent surgery in the days afterward, and the recovery will be grueling.

Ford’s status will be the biggest question mark going into the 2021 season on a Cowboy defensive line that won’t otherwise change much.

If Ford is healthy, he’s a no-doubt-about-it starter capable of building upon his superstardom. If not, it’ll leave a big hole opposite Tyler Lacy, with Brock Martin I think most in line to take over that spot. Junior college recruits Tyren Irby and Nathan Latu could also see some time in the rotation.

DT thoughts: Another situation where injury may play a factor in how this depth chart gets settled. Clay is coming off an ACL tear that happened just before the season, so the expectation here is that he should be healthy by fall. If that happens, think he has a real chance to take over as a starter. I’m also keeping an eye on Jayden Jernigan here as a potential X-factor. Didn’t play last season but appeared in 13 games as a freshman in 2019.