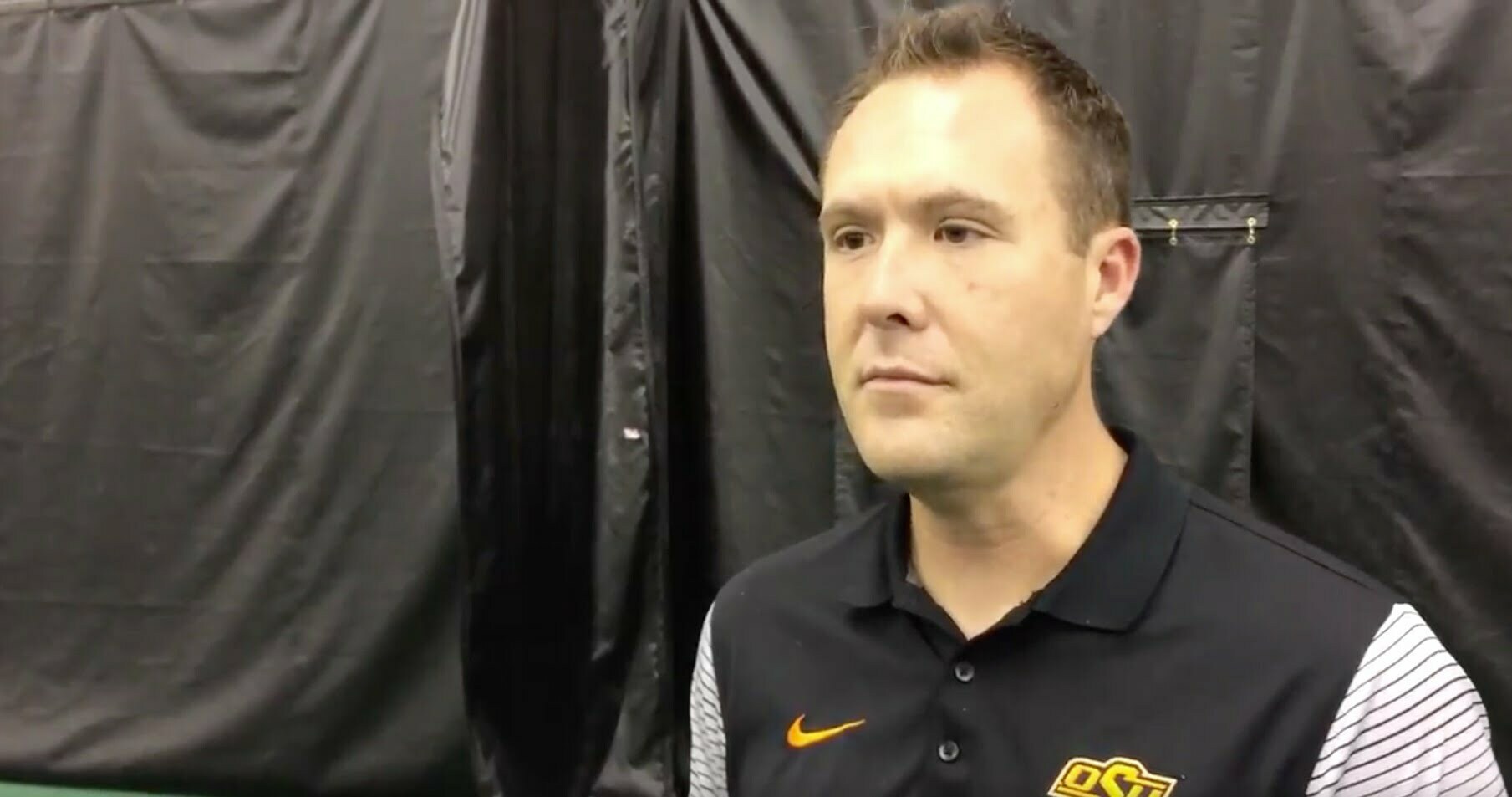 Coach Chris Young for the Oklahoma State Cowgirl tennis team was kind enough to sit down and talk to me about his program. The following is the interview we had.

Nick: Coach, first of all, thank you for taking the time to talk with us. Most of the readers are probably not super familiar with yourself or the Cowgirl tennis program. Could you give us a brief summary of your coaching career and what brought you to Oklahoma State?

Coach Young: Well for me, I’m an Oklahoma native, went to Norman High School and played tennis there. Growing up in Oklahoma, I’ve always had a passion for tennis to develop in the state. I went to Lipscomb University and then to Oklahoma Christian in Edmond to finish my tennis career.

I got into coaching right after that and stayed as an assistant for several years before becoming the interim head coach when the current coach began battling cancer. From there, I went to Wichita State where I was the director of tennis and men’s and women’s coach for five years before coming back to Oklahoma State in 2009.

For me, it was all about coming back to the state of Oklahoma, being close to family and friends, and having the opportunity to make an impact on tennis in the state. A lot of people were telling me that this wasn’t a great job or wasn’t a tennis school or wasn’t a location where top players were going to want to come to school.

Without the facilities and with a lot of other challenges, there were definitely some negatives. I really did see it all as positives to bring excitement to the state on put a stamp on tennis at Oklahoma State. Especially with what happened last year in Tulsa, it really did a lot of great things for the state.

Nick: And what an awesome season it was last year, reaching the NCAA Finals in Tulsa in front of the home fans. Where there any special memories in particular that you have form that journey last year to the Finals?

Coach Young: It all started with the Georgia match that started in the rain and for a minute there it looked like we might have had to move the game back to Stillwater. The committee met together and didn’t want to award a home match. So we had to wait until 9:30 pm to begin our match and that was the second year in a row that we were faced with unlucky situations that we had to deal with.

But when we came in to the Case Center in Tulsa at 9:30 and looked up and saw all our fans there, it really gave our girls a big boost, they were excited to play. The joy of winning the game and the excitement was immense, I mean the match didn’t end till 1 am!

I think the big deal for us is the amount of coverage and amount of people that began getting involved with our team and the amount of people that came over to support us. Each match was unique and we had different girls step up in different ways, won in different ways. The thing about that team is they were so locked in in the moment and kept the same flow all the way through and that is so difficult to maintain, to maintaining normalcy.

The best memory for me was driving to the Case Center the day of the finals, and we had a couple of vehicles, and I was just watching the girls hanging out the windows and singing and just enjoying the moment. That’s what I really enjoyed, it wasn’t too big for them, they weren’t too nervous or scared of it. And then to get there and see all of the people, man, that was pretty special.

Nick: Y’all came so close to winning the whole thing. The finals as you know came down to the final singles match in which Stanford won to win the the collegiate match 4-3. Obviously that’s got to be just a tough feeling. Getting to the summit of collegiate tennis and coming so close to the championship. As a coach, what do you tell your ladies after a heartbreaking match like that?

Coach Young: You know it came down to the last match, and actually Vladica had a match point in the 2nd set, so literally we were one point away from winning the whole thing. You know at that point, there’s not a lot that really needs to be said.

Everybody knew we had been through so much. What I said in the post match interview was what i felt and that it was two championship teams playing out there and it was such a great match and that we were apart of something special. You know we’re never gonna get that one point back and that’s definitely frustrating.

But we are going to carry with us memories that are going to last us the rest of our lives. We built something really special and that’s just not something that anybody can take away from us.

Nick: Your squad will open the season ranked 5th in the country which is the highest ranking ever achieved by a OSU women’s tennis team. What are your thoughts on achieving a preseason ranking of that caliber?

Coach Young: We return five of the six starters that played in the finals. We’re going to have replace two seniors that meant a lot to our program. As far as talent goes, we are a very talented team this year.

Obviously a lot of things have to happen to have the same level of success that we had last year. I mean I can’t even tell you where we started off the season last year so I’m not sure how much it really means and that’s kinda what I told the girls. We’re gonna have to earn it and that’s the mentality we’re trying to have in building this program.

Nick: Looking ahead to next season, I see on the schedule you do have a rematch against Stanford. What are you looking forward to the most this season?

Coach Young: I’m really excited to to see the senior seasons of Carla Tur Mari, Katarina, and Viktorya. They’ve meant so much to this program and will leave here having left a legacy at Oklahoma State. Karla and Viktorya are going into this season with their career high in ranking, and everyone knows how good Katarina has been. I mean she was the tournament MVP on that team that lost in the finals and that’s not easy to do.

As far as matches, we start off with several matches at home and I’m looking forward to continuing building our fan base and playing off our home crowd. For us, the National Indoor Championships is something we are looking forward to that we need to qualify for. We haven’t performed very well there so I’m definitely looking to improve there. A

fter that, we go to Florida to face off in a rematch against Stanford, and you know there will be a lot of emotions that will come up there. We play them on Friday in Orlando and then we travel to Gainesville on Saturday to play the Gators, the preseason No. 1 team in the country with like a 160 or 170 home court winning streak. That two weekend stretch is going to be as tough as any team is going to have all season.

Nick: Just kind of building off your first point, can you try and explain what the atmosphere feels like at the Greenwood Center for an OSU home match to someone who has never witnessed a tennis match live? Also, can you describe to us the effect switching from the Colvin Tennis Courts to the Greenwood Center had on your tennis program?

Coach Young: It is certainly one of the best facilities in the country. The Greenwood Center has changed our program in so many different ways. From the way people view us, to how we view ourselves. To have that type of environment to train and compete in has been pretty special.

It’s also proven to be a great environment for spectators, our matches are much more lively and interactive than most tennis matches. We want fan to be engaged and root for the girls in big points. During big points and games, the fans will start clapping and cheering.

When we went to Tulsa last year for the finals, a lot of people came up to me asking how we have such a great fan base, so that’s been really exciting. The Greenwood Center allows fans to be much more involved than they would think coming in. You can pretty much hear anything on the court from your seat, so you feel very involved in the match.

Nick: Coach, thanks for your time today and looking forward to watching your Cowgirls this season!

Coach Young: Thank you for giving our program some attention, we’re very appreciate of everything.