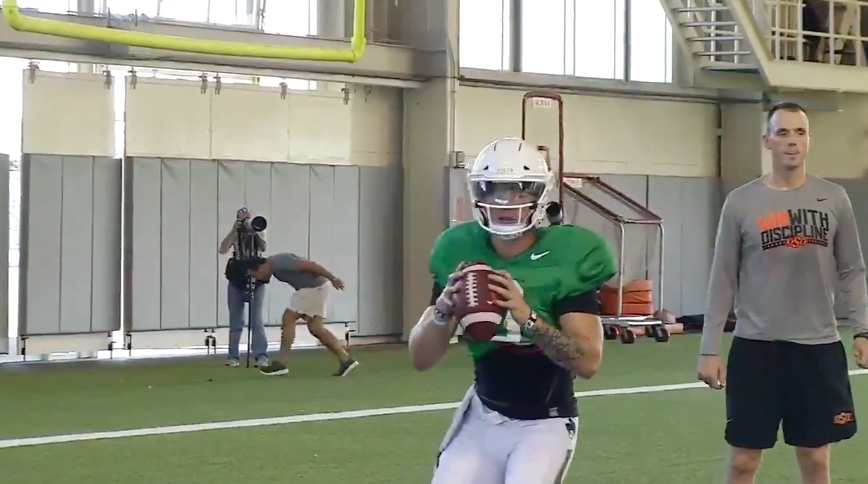 Oklahoma State checked off practice No. 5 of the fall Tuesday afternoon, and no clarity has emerged in the Great Quarterback Battle of 2019. As we expected, Spencer Sanders and Dru Brown remain deadlocked in an ongoing battle for QB1.

Mike Gundy talked about the situation recently, saying that, as of then, they would play both because neither had separated themselves in the competition. His new OC, Sean Gleeson, added context to that Tuesday by labeling the battle a “dogfight.”

“The dogfight is continuing,” said Gleeson. “They’re both playing great. It’s fun because I think it’s elevating the play of our entire group. When you see two kids battling it out like that and they’re both neck and neck, they’re taking every rep so seriously, I hope that inspires our whole group. We’re only a couple practices in, but I feel encouraged about the way they’re running around and their effort out there.”

Talking with Oklahoma State new offensive coordinator Sean Gleeson, it's still a "dog fight" between Dru Brown and Spencer Sanders at quarterback. Gleeson says the battle boosts the competition among everyone on the Cowboys offense: pic.twitter.com/k1iwH5fdAx

Just because neither Sanders or Brown has taken the battle by the horns just yet doesn’t mean OSU is without quality options, though. Both quarterbacks have reportedly started off fall camp on a hot streak after strong springs and a year of pine-riding, and both present different strengths for the staff to consider.

“I know people say sometimes, ‘Well if you can’t name one, you don’t have any.’” said Gundy earlier this week. “I don’t see that as the situation here.”