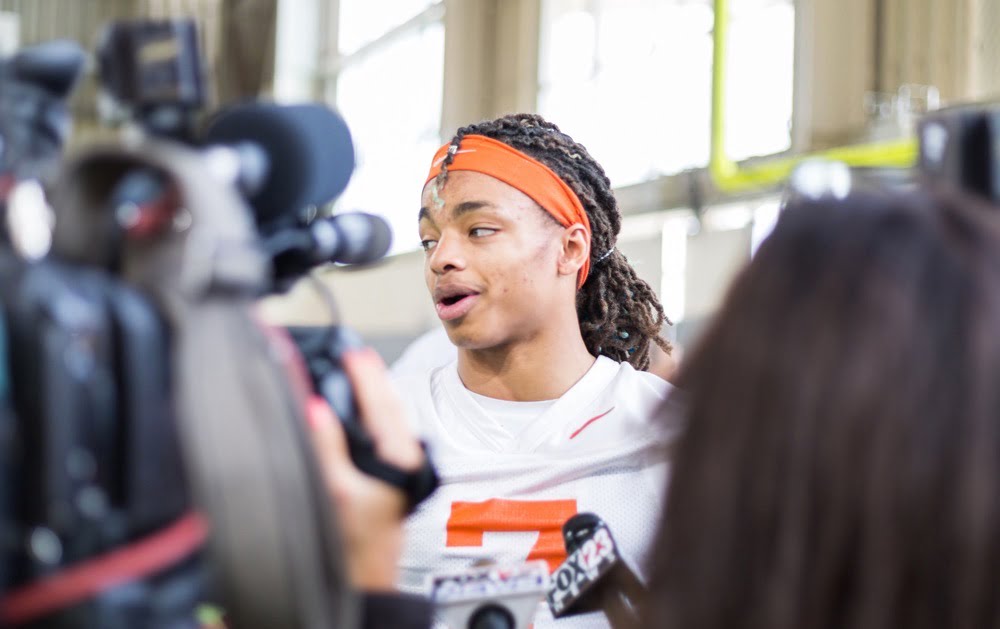 Both have spent time at those positions in high school and on the Oklahoma State football team, but this is permanent, according to the spring media guide.

Richards said because of that experimental experience, the move isn’t a difficult one.

“Playing the position is nothing new to me,” Richards said. “As long as I get to go out there and make plays, I’m comfortable.”

A change from safety to linebacker is a bit of a formality for Edison-McGruder. He was the Cowboys’ third safety last year behind Jordan Sterns and Tre Flowers. He played a decent amount of snaps, particularly after defensive coordinator Glenn Spencer started using a 3-3-5 defense against Texas Tech.

Gundy said he particularly likes the Edison-McGruder move because it makes him a more valuable asset for the NFL.

“A lot of (the move) has to do with that 3-down, 4-down (linemen) concept we’re going to now,” Gundy said. “Having that guy that can play both, if you really have one of those guys, then they’re potentially a high-round pick because they’re skilled.”

For Richards, he said he considers himself a defensive back, not a corner and not a safety. Last year, though he definitely gave up his cut of big plays, he added a kind of heightened toughness and willingness to put his head into a pile.

His tackle numbers are indicative of that.

At safety, his numbers will have to at least hit last year’s again. He will fill Flowers’ role more toward the line of scrimmage, and Flowers will slide back and play center field like Sterns did. With that, Richards is in a pretty lucky spot with three safeties, former and present, who can help him through the transition.

“I honestly talk to Jordan every day,” Richards said. “He gives me more pointers on maturing as a young man more than anything, spiritually and whatnot, but as far as safety goes, he just tells me to go out there and make plays, believe in myself, keep the confidence and keep my instincts and don’t think too much.”

That’s so Sterns talking. Edison-McGruder said aid on his part won’t be necessary.

“Ramon don’t need no pointers,” he said. “He’s a great player. I think he’s gonna go out there and dominate.”

As for Flowers, Richards said he connected with him the day he got on campus. But back then, it wasn’t peaches and cream like it was last year for a group that was clearly as close as any other group on the field.

“We went through a really rough first year, my first year,” Richards said. “We knew what it felt like to be at the bottom. We’ve grown from that. So me and Tre’s relationship has been strong since the beginning.”

There also might be some strategy behind the moves. With Richards back at safety, the younger corners such as A.J. Green and Rodarius Williams, along with Darius Curry, will get almost all the snaps in the spring. Those guys have played virtually no game snaps, and with Lampkin gone, at least one of them will have to contribute.

At linebacker, adding Edison-McGruder would bolster the group for sure, but it’s probably already set without him. Chad Whitener, Justin Phillips, Calvin Bundage, Patrick Macon, Kirk Tucker, Gyasi Akem just to name more than a few.

With that, Spencer said it’s just a test, a test for Richards, McGruder and the litter of young corners.

“We can always put Ramon back,” Spencer said. “That’s the good thing about spring ball, nobody’s keeping score. So if we had to line up tomorrow, I don’t know exactly what we’d do. Probably wouldn’t be this, but after four or five practices, we’ll see.”