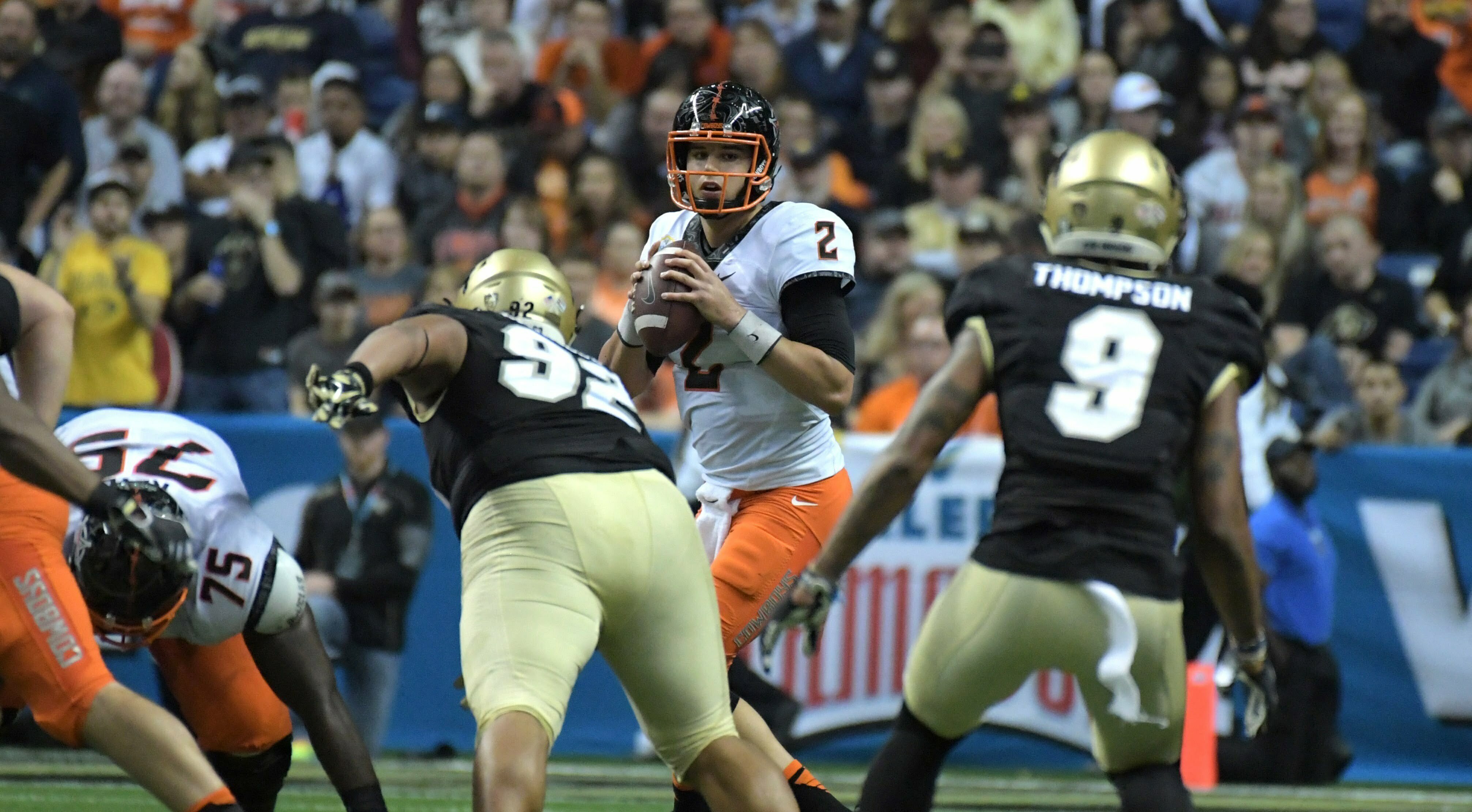 We thought it might be fun to have a little roundtable offseason discussion over what three games we rank of the 28 Mason Rudolph has started as the three best of his career. Here is what we came up with.

OK roundtable time. Let’s talk about Mason Rudolph. I want everyone who’s here to rank his top three games and start with No. 3. Here they are. I’ll actually start with my No. 3. I think Rudolph’s third best game ever was against Texas Tech this season. He only completed 20 passes, but threw for 395 and two and ran for another one. He had the big bomb to The President and distributed dimes like he was a rich kid in a 1950s candy store. Also stared down Patty Mahomes.

He was unbelievable. I debated putting the 2015 Kansas State game in the No. 3 slot, but he only completed 62 percent of his passes that day. Also Texas from 2016 is in play, but I didn’t actually see it because I was at the Ryder Cup.

My number 3 is the Texas game this year. Stat-wise it was Peak Home Mason going 19-28 for 68 percent with 3 TDs and no picks. But more than that, it was just such a fun game to be at and watch him. After CMU and Baylor I think I was wavering a bit in my confidence of his choices, but that whole game just felt like he was the dude and nothing could possibly stop him.

His confidence level was on par with Dizzy playing Arkansas Pine Bluff. Just loads of swagger you can feel from the top row, and I loved that.

I’d go Texas for No. 3, too. He wasn’t the only guy making plays with the ground game rolling against the ‘Horns, but when his number was called he was incredible. Dropping seeds over the top of the defense and unraveling the secondary so much that Browns scouts were in tears in the press box. (Probably)

No. 3 is Pittsburgh (2016). OSU single-game record 540 yards and started it off with a 91-yard TD to Washington (second-longest passing play in OSU history). He had some misses on the intermediate stuff but the quality win and the history puts in the top three for me.

No. 3 KSU because other than that clumsy INT he had a good game, especially late in the fourth (although that big TD to Washington was a gift from the KSU defense).

This pass from Rudolph to Seales was amazing earlier in the TD drive. https://t.co/mERZ8uarv4

TCU is No. 2. He had four TDs in the first half, albeit one was a screen to Jeff Carr. Regardless, that’s insane. Offense went a bit flat in the second half, but still, 5 TDs and almost 400 yards? Phew.

My No. 2 is TCU from 2015. He started out hotter than Mike Gundy trying to corral the calves on a 110-degree Oklahoma day in the middle of July. And Oklahoma State de-constructed an undefeated TCU game. Gus Johnson might be receiving extra medication to this day because of Rudolph’s performance that evening.

No. 2 is TCU (2015). That was a dismantling of a vaunted Horned Frog defense. Five TDs to zero interceptions and the deep ball was on point. It was one of the best wins in the Gundy era as well.

No. 2 is Bedlam 2014. His second ever start, went on the road and dropped almost 300 yards and a couple TDs and WON. Wouldn’t have happened with Daxx at the helm.

Two and one are pretty close for me. I’m going to say two is the K State game this year. He was still struggling a bit over the season and then came out in the Purple Wizard’s own castle and threw 76.3 percent (!!!) with a QB rating of 210 and 5 TDs. What brings this down for me is the fact that he threw two picks, including a pick 6. Great stat game and, though there were some tense moments, he really showed he was a guy to be counted on when it came down to it on the last drive for the Pokes.

And your number one?

Bedlam 2014. It’s not his most productive game but it’s one that stands out in the minds of many OSU fans. That’s his most significant win, I guess. A freshman in his second career start, throwing for 300+, etc. Boone covered it well above. He’s had flashier games production-wise, but when I think of Rudolph, that game pops into my head.

No. 1 is the 2016 Alamo Bowl. Rudolph was brilliant with 314 yards and three TDs and no picks. He finished 69 percent of his passes. The fact that it was a bowl game and was a follow up to his worst start in college pushed it over the edge for me.

I’m going TCU 2015. I thought he had everything working and probably his best NFL tape to date. His deep ball to Washington was money, he had his short game and both tight ends making plays across the middle of the field, and somehow finished second in rushing with 26 yards. OSU would have been toast without a legit NFL QB prospect running the show that day.

I am all in on TCU 2015 being Mason’s top game. He was incredible. Passing was amazing, one of the best games I’ve ever watched in BPS (pour one out for Bedlam 2011). His stats are jaw-dropping. 16-24 for 67 percent, 5 TDs and zero picks. He threw for 352 yards against a TCU defense that allowed an average of 215. He took a team that went 11-2 and finished the season ranked No. 7 I believe and just made them look foolish for 3.5 hours. THAT is the best Mason. A couple great Poke-loving friends and I watched this game the week before the 2016 season started and I was buzzing for DAYS after watching it. Truly amazing when he plays like that.

I’m here to represent the 2016 Alamo Bowl as his best game ever. It was the entire platter. 22/32 for 314 yards and three TDs. He ran it. He caught it. He did everything but drench Gundy with the Gatorade. Then he called him Big Daddy in the postgame which totally made up for it. I’m with whoever said it originally, Boone’s next $1B could be best spent constructing a dome over all of Payne County Truman Show-style so that we get that Rudolph for the entire home slate next year.