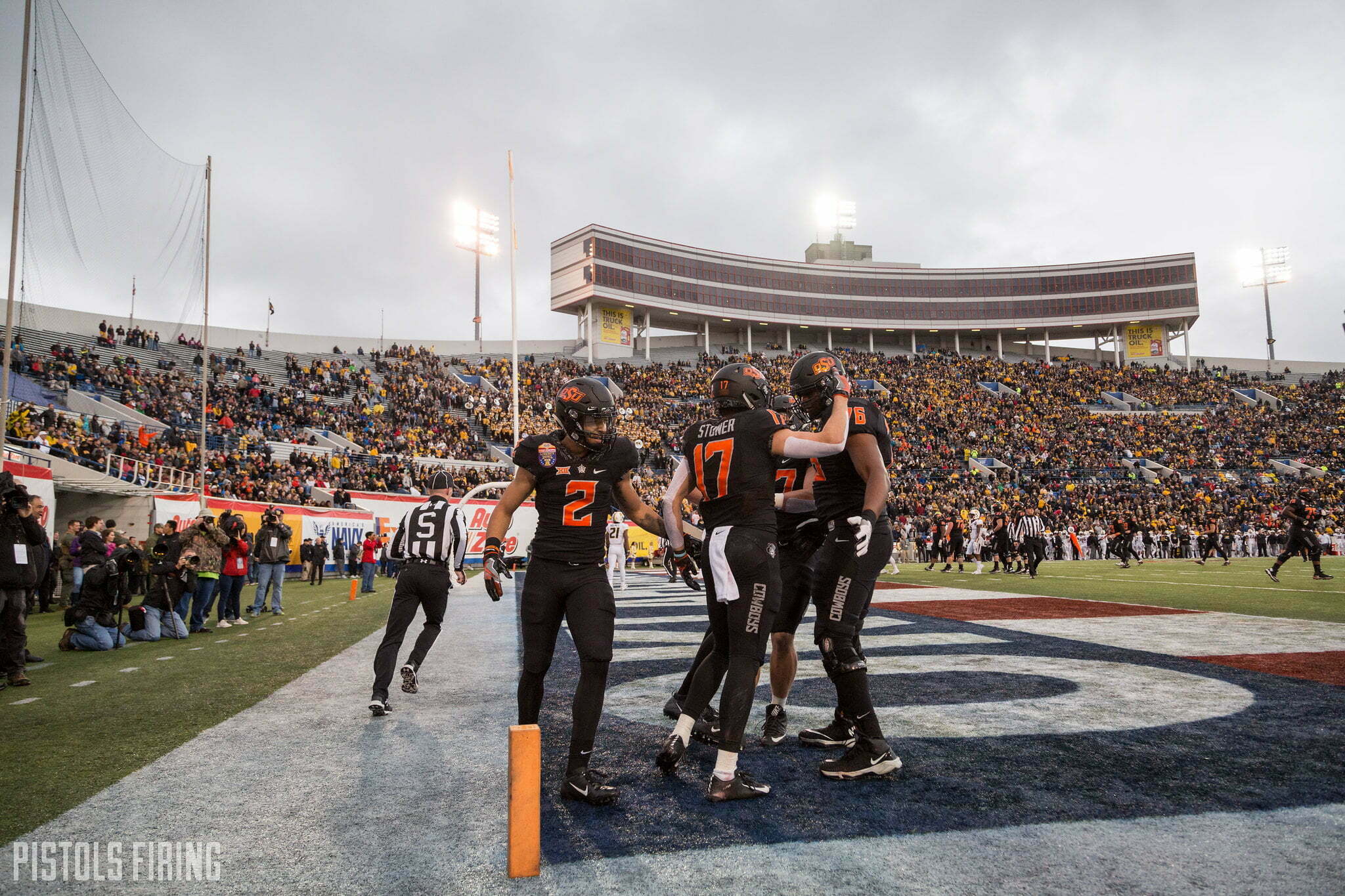 Listen, it is Ranking Everything SZN. We haven’t even gotten started. We’re going to be ranking Pete Incaviglia home runs, Markel Brown dunks and possibly even equestrian horses by the time the coronavirus-induced shelter-in-place regulations are lifted. I will rank Mike Gundy hair seasons if I have to to bridge the gap between no games and games (whenever they start again).

Anyway, we’re doing the lowest-hanging fruit right now. I ranked Gundy’s 15 teams the other day. We did a wine cellar hoops team. We’re just getting started with rankings SZN. Next up: OSU’s 14 bowl games.

Out of respect for this game, there shouldn’t even be a No. 2 or No. 3. That’s how good it was. Apologies to the Bedlam wins, this was the greatest college football game in Oklahoma State school history.

This one was on the heels of Rudolph and Washington announcing they were coming back, and 2017 seemed like it could be anything we could possibly dream it could be. It wasn’t, but don’t tell my December 2016 self that because when Justice put the Buffs in a coffin and blew a kiss to the OSU fans in attendance, I thought OSU was going to play Bama for the national championship the following year.

"Are you not entertained?" pic.twitter.com/OBkYi8ODjf

OSU intercepted future Super Bowl champion Nick Foles three times, and Justin Blackmon had 117 yards and two touchdowns. OSU would only lose one game between this game and its loss at Arizona in September 2012. That’s 21 months, one loss.

The check engine light game! Also a reminder: Three Washington defensive players off that team went on to be first-round picks in the 2015 NFL Draft. Three! Astounding.

If only because it was the last Rudolph-to-Washington connection ever. Also, Justice was a GAM that game. When OSU had to shut it down, they went to No. 5.

Don’t let the score fool you, this was a great one. OSU led 31-28 with 12 minutes left before Oregon closed hard. Dez had 13 for 167 and did whatever he wanted. Zac got concussed (?) but his 329 passing yards were the third-most in any game in his career.

This was a fun one. The only win I’ve ever covered in person. Neither team was all that great, but it at least came down to the last possession. I remember it hitting me after the game as I watched everyone celebrate on the field just how much a bowl win means, even when you’re 6-6.

This was the “guys Dez might be the best player in the country” game. This is back when bowl games were still unusual and exotic. Going to the Insight Bowl felt like playing in a NY6 game.

It wasn’t a bad game, it just wasn’t mega-memorable. Maybe I need to rewatch it though because the box score tells me there were 41 points scored in the fourth quarter and Clint Chelf tossed it 57 times for 377 yards. Missouri, by the way, completed 17 passes on 44 (!) attempts.

Bobby Reid downs John Parker Wilson. What a world. OSU has never lost to Alabama. Bonus points on this one because it was OSU’s second bowl win since 1988.

Five OSU players completed a pass in this game (for posterity: Lunt, Chelf, Walsh, Randle, Stewart), and the outcome was never in doubt. I did fire off one of my all-time great tweets during this one. When Purdue scored in the third quarter to make it 45-7 in favor of OSU: Fire Bill Young!

It was fine. There were a handful of fun moments. But when you combine the fact that OSU got beat and that it was a “wait, is this guy even good?” Kellen Mond who did the deed, and I don’t have a ton of great feelings from this one.

It was somehow a lot worse than the score indicates. OSU ran it 30 times for 63 yards.

Erase this game from my memory. Keith Toston threw OSU’s only TD pass, that’s all you need to know. Never play Ole Miss in a bowl game again.