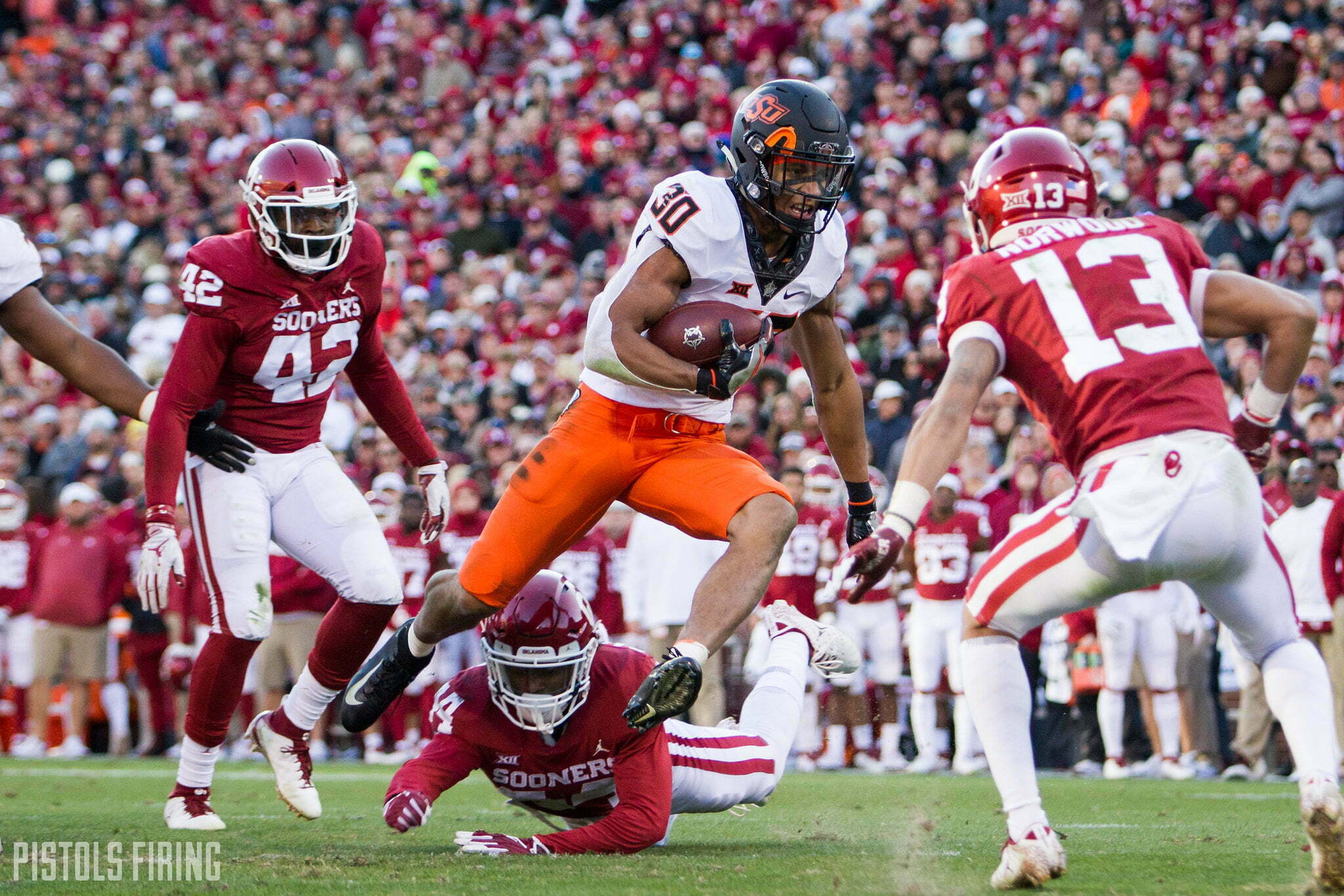 I got a lot of not great tweets and comments on some of my golf stuff this week, but they were redeemed by a couple of good emails. Let’s hop into those, and as always, I appreciate all of you who (thoughtfully, even if it’s critically) email or DM me about what’s going on in OSU world.

Look, I think Chuba has the potential to be the next great OSU RB, but I want to tap the breaks with the “world class” Chuba tag that he somehow got before ever putting on the OSU gear.

This all started with Gundy’s comments about him having Olympic-level speed.
With all due respect, I think Gundy was being a bit hyperbolic.

I’m sorry, but in this day and age, that kind of speed is frankly pretty average among the top HS athletes. It shows on tape. Yes, he is fast, and appears to have faster top end speed than Justice, who while he has big-time acceleration and power at this size, did not have the consistent top-end speed to pull away from second-level defenders.

I have to roll my eyes a bit when you guys tout him as a God Speed Guy, when his numbers and tape clearly show him at a notch below typical elite fast guys. In fact, I am willing to bet you that LD Brown has a better 10-20 yard time than him and almost just as fast in the 40-yard. -LL

I’ve spent the last 20 minutes trying to come up with some sort of Canadian-American conversion loophole here to prove that Chuba is in fact Canadian Usain Bolt, but I can’t do it.

Here’s are three things we know.

Chuba’s fastest 100M dash (that I could find): 10.55
Where 10.55 would have ranked this year at all NCAA events: Outside the top 200
Braydon Johnson has been touted as potentially faster than Chuba

“Chuba has world-class speed,” Gundy said once upon a time. “There’s been some conversation, in four years, he could be running in the Olympics. When you get to a certain point, you’re really fast.”

I love the quote, When you get to a certain point, you’re really fast. Sure.

I always feel like when I’m watching him run that Chuba has a lot more to give. Like he’s in the fourth gear of a foreign automobile that has six of them. Maybe it’s the way he runs or maybe he’s just not actually that fast, I have no idea.

What I do know is that he’s a lot stronger now than he was in high school when he ran that 10.55. Additionally, we should probably be comparing his high school time to other high school times from 2019 across the country, and yeah, still not really in the ballpark of “world class speed” (although getting closer!). 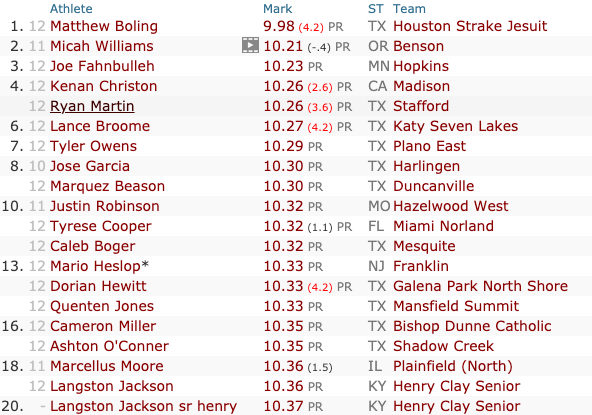 However, when we talk about world-class speed, I think we undervalue the technical side of running track, and I also think we undervalue what it means to have world class speed in football. For example: How many of those guys above could take a hit from Caleb Kelly and not be fazed? I’m guessing not many. I know this wasn’t your point, but I think it warrants mentioning.

So would a stronger, bigger college Chuba run faster than a 10.55 right now with six or nine months of training? I would hope so. And is a 10.55-running Chuba plenty for Sean Gleeson’s high-octane offense? Absolutely.

Also I came across this and thought it was fascinating. Also (!) I went down a 30-minute rabbit hole watching 4×100 relays. So thanks for that.

Last thing on this: I think Chuba’s pro day is going to be one of the 10 most intriguing days for me of 2020 in terms of coverage for this blog. I have no idea what’s in play there.

Hope all is well. Given OSU’s recent success in all of the spring sports, I had a question I thought would be fun for you to discuss with Carson on a pod or answer in a post on the website. (ed. note: How about both?)

I guess the base of this hypothetical question is really just “where does a non-revenue sport national title rank compared to football or basketball success?”

Either way it’s awesome watching the success of all these sports. -James E.

As a writer: No. 3, I think. I’ve gotten to cover a lot of things over the last eight years, but a deep NCAA Tournament run is not among them.

The real question for me is which of those three hats do I most enjoy wearing. Some days I find myself only caring about one or the other, and rarely are they ever all three equivalent.

There’s also probably some recency bias going on here. It’s easy to pump Matthew Wolff and Colin Simpson on May 30, but if I was posed this question late in October with OSU, OU and Texas knotted atop the Big 12 standings going into the final month with Spencer Sanders getting 5th-place votes in straw Heisman polls, I’d likely have a much different answer.